He is the MP for Hendon.

He won Hendon, from Labour's Andrew Dismore by just a handful of votes.

He is unlikely to win the next election.

His life as an MP has been ... interesting. He has a history of unfortunate accidents, both physical and verbal, and this week has seen two rather extreme examples of this regrettable tendency.

Earlier this week, you may recall, there was an article in the Guardian which referred to the infamous so called 'Graph of Doom' being waved about by Barnet Council in regard to the terrible burden that residents of this borough will prove to be in the future, as too many of us will insist on having children, staying alive, and sometimes having needs that require support.

Fellow blogger and Labour activist Adam Langleben wrote about this to Hendon MP, Matthew Offord. Adam had also written months earlier to Offord about another matter in relation to policing in Edgware, after suffering the theft of an iphone in Station Road. Offord is not awfully keen on Adam, as he has been closely involved in working for campaigns for Andrew Dismore. That's all you need to know. Here is the email Adam received from Offord. (It slipped out before Max could veto it, although Max told him off, and made him stand in the corner, when he realised what he'd done.)
"Langleben,You have emerged!Now, following our last email exchange in January you advised that you were a constituent but then Andrew dismal stated in the Hendon Times that you left his flat the previous November – so who was lying – you or him? Come to think of it you both have a poor track record when it comes to the truth.Regarding your email, if you want any information on the article please contact Nick Walkley on nick.walkley@barnet.gov.uk as I only respond to my constituents.I hear that you have more time on your hands now the role with xxxxxxxx didn’t work out. Good to see that my conversation with him had some effect."

I think commentary is really superfluous - but if nothing else, the last sentence is really quite extraordinary, as I am sure you will agree.

Just now on twitter, another extraordinary statement alleged to have been sent by Offord to a constituent, Nick Lansley, has emerged - this time on the subject of same sex marriage: rumour has it that Max has now left Matthew's team, packed his suitcase and voluntarily gone to live at Battersea Dogs Home.

"Thank you for contacting me with your views regarding Same Sex Marriage.My own position is that I will not be voting for legislation that extends marriage for same-sex couples. Having waited many years to get married I acknowledge the value the commitment brings. It is my strong personal, moral and religious belief that the institution of marriage is to provide the foundation of a stable relationship in which those two people of the opposite sex procreate and raise a child. That is physically not possible for same-sex couples so I don't see the point of introducing a law to allow this. I strongly believe in same-sex couples having the right to a civil registration, in order that they receive the same benefits as opposite-sex couples but not marriage.To many this might seem like a trivial matter, particularly since the introduction of Civil Partnerships in 2004 means that same sex couple already enjoy the same rights that married couple do. However the institution of marriage is woven into the fabric of our nation - it affects our courts, inheritance rights and even our schools. And it is the effect on our schools, children and teachers that is worrying so many. Close to 100,000 people have signed the one man, one woman equals marriage petition.In regard to education, Section 403 of the Education Act 1996 places a legal requirement on schools to teach children about "the importance of marriage". If marriage is redefined, schools will have no choice but to give children equivalent teaching on same sex marriage, even those children of a very young age, including those at primary school. So what will happen to parents who because of religious, or philosophical beliefs take their children out of lessons? It is simply inconceivable in today's world where political correctness runs a mock in our institutions, that there would not be profound consequences for those who hold traditional views. Parents who object will be treated as bigots and outcasts, possibly excluded from being on the PTA, or from being a governor. Discriminated against and persecuted because they hold views that have been enshrined in our laws and have been the cornerstone of our society for two thousand years. And what of the teachers who object to teaching about same sex marriage. Will they face disciplinary action? How will it affect their careers? Will same sex marriage be covered under such subjects as citizenship forming part of the main curriculum taught to our children and tested through examination? These are just some of the questions that the Government has so far failed to answer.I do not believe that same sex marriage would serve to enhance British society or its values.Yours sincerely,MATTHEW OFFORD MPMember of Parliament for HendonHouse of CommonsLondon SW1A 0AA"

Mr Offord's reply would seem to suggest that marriage must be undertaken only for the purpose of procreation. Goodness me, an argument that Mrs Angry has not heard since she was about fourteen years old, and squirming with embarrassment during an RE lesson featuring the martyred performance of Mother Fidelis, reluctantly acknowledging that there was such a thing, girls, as, sshh - sexual intercourse, and that the whole horrible business was unavoidably linked to the getting of babies - and part of the grim duty of a good Catholic wife. 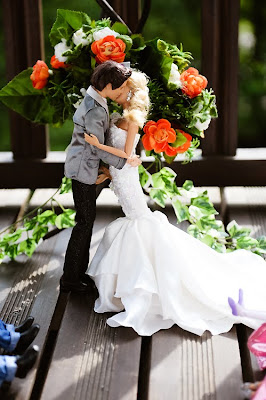 marriage according to Mr Offord: Barbie & Ken - this is okay: as long as they procreate

According to Mr Offord, who admits that he himself has waited many years to get married, and has no doubt led a life of impeccably moral and restrained behaviour both before and after this happy event, (around the time of the last election), according to Mr Offord, marriage takes place so that two people of the opposite sex can have children. There is no point, he says, in same sex couples marrying, because they cannot have children. (Don't tell him about surrogate parenthood, or adoption or fostering, or even the fact that some same sex couples or individuals might also have or have had relationships with the opposite sex and even had a child by a previous relationship ... ) 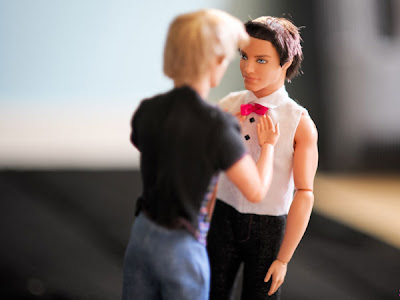 not allowed: ken and ken - sorry guys, the wedding's off

Funny, isn't it, how our Barnet Tory politicians, especially the ones who do not have children, are so keen to tell everyone else how the rules of parenting should be: at a recent meeting, if you remember, Brian Coleman, who is openly gay, demanded that fostered and adopted children should be placed only with two parents: a mother and a father, in other words not to single people or same sex couples. You will note that with these Tory hardliners, no mention is made of the highest priority being to find loving parents, or to secure the happiness of the child.

Logically, anyway, by Matthew Offord's rule, couples who want to get married but do not want children should not do so, and those who do want to get married and have children but find they cannot, should separate - or at least stop having sex. Probably Mr Offord spends a lot of time worrying about this late at night. If so, why are you lying awake worrying about this when you could be procreating, Mr Offord?

And why do Tory MPs say that they worry so much about personal liberty, and choice, when it is only their own personal liberty and choices that they really care about, and feel entitled to interfere with and to regulate the behaviour of everyone else - especially if they think they can take a morally superior line by doing so?

Life is hard, and often very lonely. If two people care about each other, and make each other happy, and want to be together, isn't that something we should all celebrate, whatever label they or you or anyone else wants to put on it? Is it, in fact, anyone else's business what people do, in bed or out of it, or who they live with, or how, or why? No: I don't think so, and I don't think most reasonable people feel any differently.

btw, Mother Fidelis, if you are still around, you were quite right, but don't worry, Mrs A has given it all up in favour of knitting, and saying the rosary.

Really A, and i had such great expectations...

Oh: Ron, sorry. But don't be too disappointed. You're having a lucky escape.