The Rites of Spring in Broken Barnet

Springtime in Broken Barnet is not marked by green shoots, and swollen buds on branches, and frogspawn in the pond. There are no rites of spring, no ceremony of beating the bounds.

It is a problem: how to honour the triumph of light over darkness, the turning of the season, in a borough where spring is already a metaphor, a symbol of resistance to the dark tyranny of our corporate masters, and their new suitors at Crapita?

We marked our territory today, anyway, and celebrated the renewal of the spirit of resistance which is the strength of Barnet uprising, in our own ceremony, a march in March, followed by hundreds of supporters from our borough and beyond, walking from Finchley, past the former constituency office of Margaret Thatcher, and the charitable accommodation of our erstwhile Tory AM and Cabinet member, Brian Coleman, to the place that represents so much to the people of the Barnet Spring: the People's Library, in Friern Barnet. 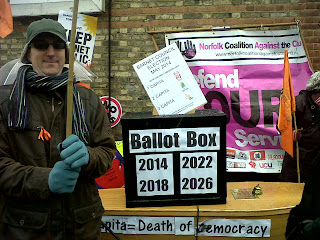 The day we chose was as far from spring as could be imagined, a day of blizzards, biting cold: one might have expected everyone to stay at home, but that they did not, and came out in such numbers to attend this march says everything about the determination of the residents of Barnet to demonstrate their opposition to the iniquitous policies being wreaked on the most vulnerable members of our society, our community, both here and elsewhere in the country, as a result of national and local Tory and Libdem policies. 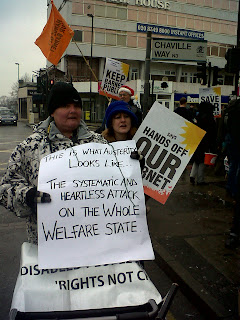 Gathering at Finchley Central station, the demonstrators heard addresses by a number of speakers, including MPs John McDonald and Jeremy Corbyn. One speech which caught Mrs Angry's attention was by local Labour activist Alon Or-Bach, who reminded us all that One Barnet, the infamous programme created to pimp our local public services to the private sector, and currently the subject of Judicial Review, is in fact the parting gift of our former council leader, now Finchley and Golders Green MP, Mike Freer. Let's not forget our debt of thanks to him, as we pass the half way mark of one government and move down the hill to a new election. 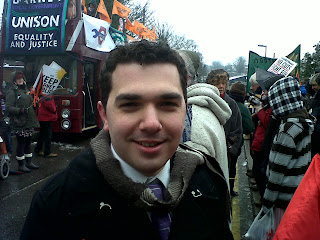 Other familiar faces at the rallying point included Labour List's Mark Ferguson, fresh from a twitter telling off from Mrs Angry, (and he deserved it): 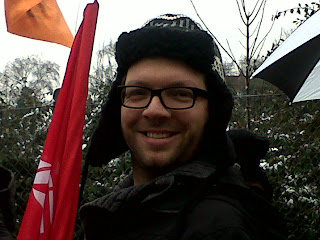 (Note that Mr Dismore removed his top hat and replaced it with a flat cap for the photo opportunity). 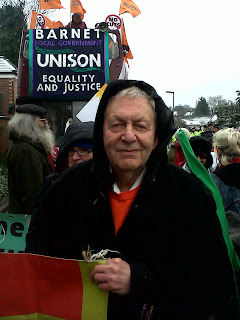 One of Tory leader Richard Cornelius' eccentric socialists, and fellow blogger Citizen Barnet (look, and a woman, too ...) 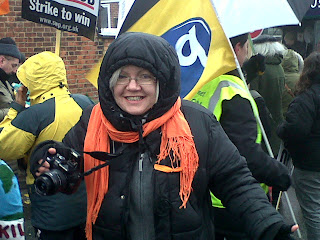 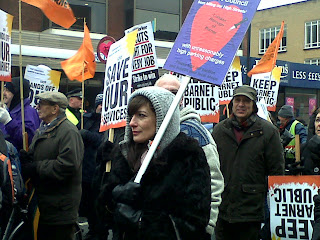 Maria Nash, who brought the One Barnet programme to the High Court this week: And Mrs Angry, making a silly face, as usual: 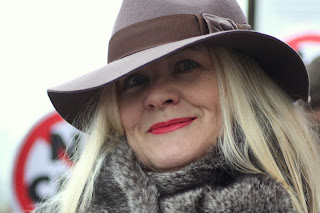 Off we went, then, walking into the driving snow and sleet, through Finchley Central, to North Finchley and up to Friern Barnet. 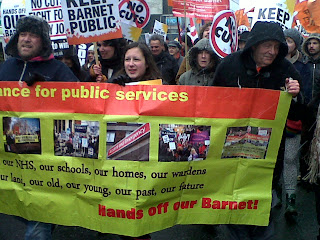 Reaching Friern Barnet, we paused for a moment by the cherry tree on the green outside the People's Library. Mrs Angry thought of last year, and the pop up libraries, next to the tree in full, glorious pink blossom, outside the building closed by Barnet Council. How far we have come since then.

Inside the library, as many of the frozen marchers packed inside for hot drinks, soup, somosas or cake, and listen to a number of speakers, from Barnet and from all over the country: Andrew Dismore, referring to the winter of our discontent, former occupier Phoenix, John Sullivan, speaking on behalf of those affected by the financial disaster that is the 'Your Choice' Barnet private partnership company, Maureen Ivens from the Save Friern Barnet Library Campaign, and two hospital campaigners, Dr O' Sullivan from Lewisham and Shirley Franklin from the Whittington. Playwright Fiona Evans came to speak about the fight to save Newcastle libraries, and the shameful behaviour of a Labour administration set on forcing residents to 'choose' between shutting libraries or respite care centres for disabled children. 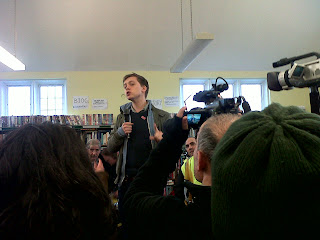 Most interestingly, perhaps, was a short but effective speech from Owen Jones, who said that campaigns like ours inspired others to take the same action, and that the tide was now turning: as we stood there, in the library closed and reclaimed by the determination and ingenuity of ordinary people, the majority of them taking part in direct action for the first time in their lives, after days spent in the High Court, fighting to stop the £1 billion exploitation of our local public services by profiteering outsourcing companies, certainly it felt as if some fundamental shift of power has taken place. We have remembered who we are, and our place in the world, and we are taking back control of our lives.

As the marchers' chant asked:

Why are we marching?

And so here we are, look: the People's Library, the Barnet Spring: signs of new life - and a new beginning.

Labels: Barnet spring, community, this is what austerity looks like, unity, we are the many they are the few