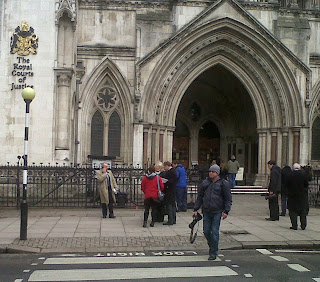 Updated Friday: see below - and Saturday:

Yesterday saw an extraordinary development in the story of Carmarthenshire County Council's Chief Executive Mark James, whose libel action against #daftarrest blogger Caebrwyn - Jacqui Thompson - caused so much furore earlier in the year.

The payments to Mr James by the council to pay for his court costs and another in lieu of pension payments have been declared unlawful, yet the authority appears to be resisting all attempts to acknowledge the gravity of the situation or to act to investigate the background to the matter.

At yesterday's council meeting, Plaid Cymru and opposition councillor Darren Price attempted to move a motion for the suspension of standing orders so as to raise the issue as an urgent item.

As you will see if you watch the webcast -see here: scroll down and click on the link for 2.39.48 - this was resolutely prevented by the efforts of the Chair, the Chief Executive and the Head of Law, Ms Rees-Jones. Ms Rees-Jones defended the action as necessary so as to allow members of the public to be aware of the items which councillors are going to discuss.

This concern for the democratic process would appear not to have applied when the items councillors were going to discuss in closed session involved the approval of the expenditure in question.

Cllr Price was not even allowed, despite the determined intervention of Sian Caiach, whose emails have been the subject of 'tracking' by officers, to explain to members what it was he wished to raise as a matter of such urgency.

In short the whole debacle was a travesty of the process of democracy, and yet everything we have come to expect from this council.

Now Jaqui reports here that a very strongly worded statement has been issued by Plaid Cymru Welsh Assembly member Rhodri Glyn Thomas, in which he says he is asking the Welsh government to put the authority in special measures.


Council should be placed in ‘special measures’, says AM

The Welsh Government Minister for Local Government has been asked to intervene in the way in which Carmarthenshire County Council undertakes its proceedings.
Noting what he considers to be a ‘democratic deficit’ in County Hall, Assembly Member Rhodri Glyn Thomas has called on the Welsh Government to examine the culture in Carmarthenshire Council and how  democratically elected councillors are prohibited from raising matters in meetings of the full council.
In this month’s meeting of the full council Plaid Cymru County Councillor for Gorslas ward, Darren Price, proposed to suspend the council’s standing orders to raise a matter.  Councillors were invited to vote but Councillor Price was not allowed to ‘make the case’ for his request.
Rhodri Glyn Thomas believes Councillors were not provided accurate information by the authority’s officers and proper processes were not followed as Councillors were told to vote without knowing what they were voting on.
Yesterday's episode in full council follows a series of instances where opposition councillors have been prohibited from raising matters in the Council.  Previous attempts to raise matters through the council’s  ‘any other business’ equivalent resulted in that agenda item being removed from all future meetings.
Leader of the Plaid Cymru Councillor Group on Carmarthenshire County Council, Peter Hughes Griffiths said it is almost impossible for opposition councillors to have any input into decision making.  He also expressed his disappointment that the Leader of the authority, Labour’s Kevin Madge, rejected his request for a statement regarding the on-going legal row with the Wales Audit Office and its claims of “unlawful” payments made on behalf of the Chief Executive, Mark James.
In his letter to the Local Government Minister, AM Rhodri Glyn Thomas has exposed that the Chief Executive has recently proposed changing the format for full council meetings which will remove entirely any opportunity for councillors to scrutinise Executive Board decisions in full council meetings.  The Plaid Cymru AM requested the Minister considered placing Carmarthenshire Council into ‘special measures’ until faith in the democratic process had been restored.
Assembly Member for Carmarthen East & Dinefwr Rhodri Glyn Thomas said:
“In the almost fifteen years I have represented Carmarthenshire in the National Assembly I have never known public confidence in the County Council to be so low.
“There appears to be a culture in which decisions are made behind closed doors; with very little opportunity for opposition councillors to challenge or discuss decisions which have been made.  The recent revelation surrounding the Chief Executive’s new pension arrangement is a case in point.
“The Council’s constitution has been manipulated over a number of years to concentrate power in the hands of a select group of officers and executive board members.  Even when councillors follow the letter of that constitution to raise matters of concern, they immediately find themselves hitting an ‘officer road block’.
“When Councillor Darren Price requested the suspension of standing orders at this week’s full council meeting, I am at a loss to explain why officers advised councillors to vote on the request without knowing what issue they were voting on.
“There is without doubt a democrat deficit in Carmarthenshire.  It’s my view that senior officers are working on behalf of the Labour and Independent coalition instead of the council as a whole.  The way in which some senior officers provide advice to councillors can only be likened to an officer operating a ‘veto’ on council business.  As an elected representative it is my duty to raise these matters with government Ministers.
“I have called on the Welsh government to intervene in the way the County Council conducts its affairs.  The people of Carmarthenshire deserve better than the way in which the current administration operates.”

Watching footage of meetings in Carmarthenshire shows that in this authority, the direction of procedure is controlled very firmly by the Chief Executive, rather than the political leadership of the council. Indeed Mr James' attitude to elected members is one which might might well cause astonishment here in Broken Barnet, where Chief Executives and senior officers at least have the tact to pretend that they are subordinate to the will of elected members, even while they are busy doing their own thing, and introducing their own agenda into the council chamber.

Perhaps the most notable moment in yesterday's meeting is after Councillor Price fails to have his urgent item allowed, and the vote is lost: 'it's lost, and that's the end of the meeting', declares the Chief Executive, with evident satisfaction. He is reminded by a rather tremulous Chair that in fact it is not Mr James' place to end the meeting, but his.

It now rather looks as if the democratic process may be showing signs of reawakening, in this authority, anyway: let's hope such a radical idea catches on elsewhere.

It would seem that Mrs Angry has misinterpreted the events of the last few months in Carmarthenshire: according to this article today in the South Wales Guardian, we are assured that the council is open and transparent, and we have that assurance from the Leader, Kevin Madge, who should know, shouldn't he?

He now tells us that he is having a meeting with the Welsh Audit Office next week, and a report is promised for some unspecified time in November.

Clearly he feels no sense of urgency, unlike his Plaid Cymru colleagues on the council, and local AMs and MPs.

And what a contrast there is between the relaxed attitude shown to an unlawful payment of a substantial amount of taxpayers' money to the Chief Executive, and what happened to Jacqui Thompson, in the council chamber in Carmarthen, on that fateful day in 2011, when Mr James called the police, and had her arrested, and she was taken to a police cell in handcuffs, and detained for hours, not for any unlawful activity - but merely for daring to film a few minutes of a council meeting from the public gallery.

Is such a disparity in treatment acceptable, do you think?


At the moment allegations in regard to payments made to the Chief Executive and senior officers of Caerphilly council are the subject of an investigation by Avon and Somerset Police, after the finding by Anthony Barrett, the Assistant Auditor General for Wales, that such payments were unlawful.

Without implying the two cases are the same, and it should be said that Carmarthenshire County Council robustly maintains that it believed the payments to Mr James to be lawful, having taken advice from the Audit Office, it might well be reasonable to argue that, at the very least, in the interests of transparency, Mr James should stand down as Chief Executive while the council's investigations take place.

Others may well feel that an internal inquiry is not adequate, and that an urgent, thorough and independent examination of the matter should now be instigated by the relevant authorities.

Jacqui Thompson has published a response to the statement by Kevin Madge here:

As she observes, his vision of openness and transparency, let alone the ease with which he maintains councillors may debate issues in the council chamber, do not seem to match her experience of the current administration's iron fisted control of the local democratic process: for example, as she explains:

"... councillors can bring issues to full council - as long as they now have seven seconders and it gets through the Chief Executive's office. ('Public question time' is completely unheard of by the way). "
It would seem pretty clear that in fact the democratic process in Carmarthenshire has been, is being, distorted by undue interference from non elected officers, and a woeful lack of transparency.

To attempt to stall any indepdendent investigation of what has happened is further undermining the ability of residents and taxpayers to place full confidence in the integrity of the local authority administration. Enough is enough. It is time to act, and time for all those concerned to be held to account.

Always best to get telephone advice confirmed in writing I find so that there isn't any doubt at a later date.

Carms can disagree all they like but I think the WAO has the deciding vote when it comes to the Accounts.

I feel confident that the authority which bothers to log the 'tracking' of councillors' emails will have taken the precaution of logging the advice given verbally over such important payments in a memorandum, or similar documentation, Mr Mustard.