Your Choice Barnet: setting out a stall, in the market place of care? 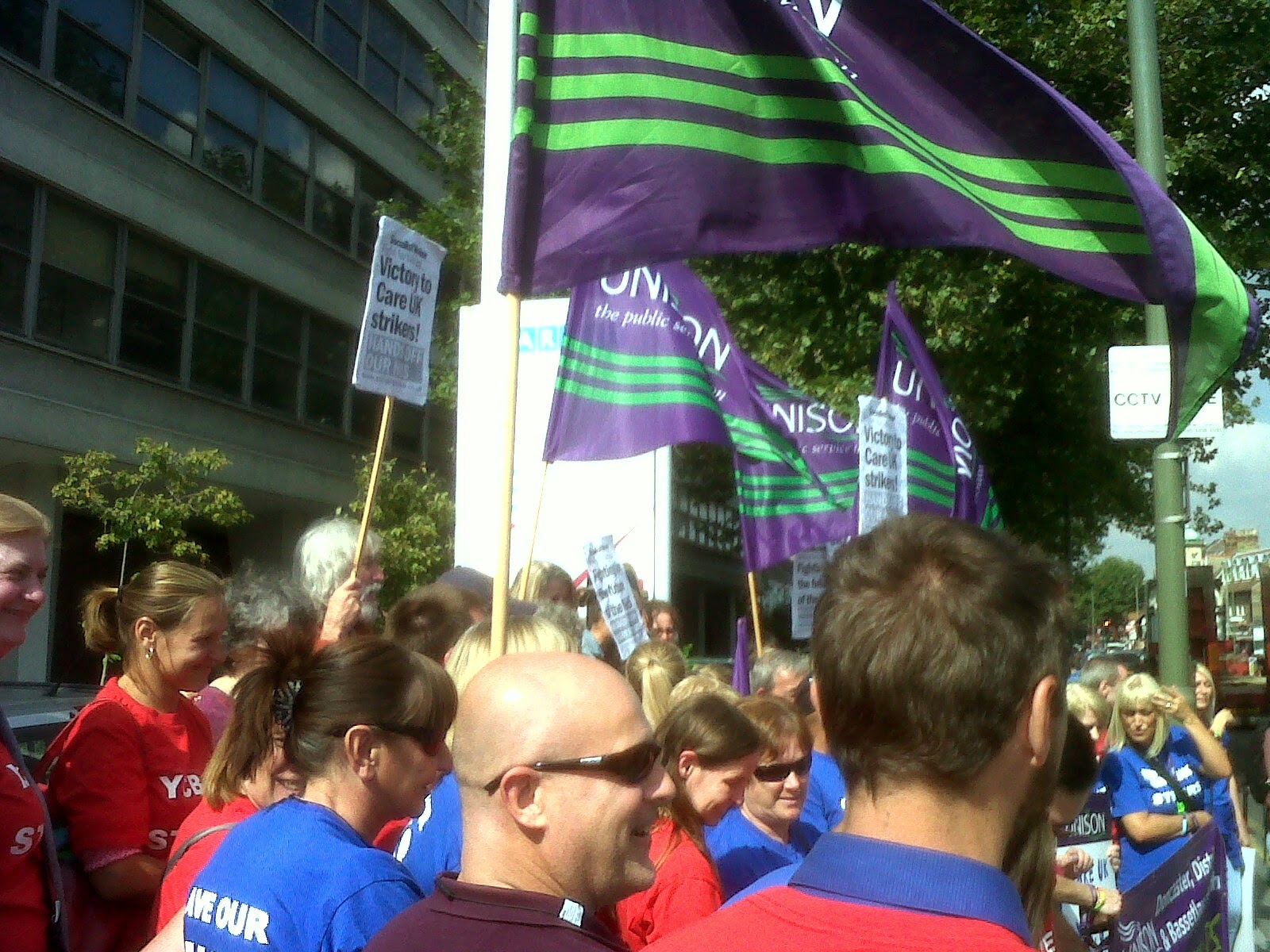 On Monday and Tuesday this week workers employed by Your Choice Barnet have been taking strike action, in order to try to draw attention to the scandalous treatment they - and the vulnerable residents for whom they care - are receiving from Barnet Council.

And yes, it is the responsibility of Barnet Council, despite every attempt by the Tory administration to hide behind the shop front of Your Choice Barnet, run by their ALMO, the 'at arms length management organisation' which is The Barnet Group.

Why do you keep the responsibility of housing and social care at arms length? Because you don't want people noticing the depth of contempt that you hold for these functions, as an ideologically driven, materially driven Tory council, contempt for those in the most need, and contempt for those with the least means.

Your Choice Barnet is the failing LATC 'local authority trading company' set up by Barnet Tories, having paid a fortune to the One Barnet private consultants Agilisys/iMPOWER to create what turned out to be a fatally flawed business model, in which, incredibly to anyone with any sense, it was expected that the profits that they thought they could screw out of the provision of care to vulnerable clients to subsidise the massive venture that is the other component of The Barnet Group, that is to say Barnet Homes, the council's social housing service.

The unions warned that the business model would not work, could not work: they were ignored, of course. Within a short time it was clear that YCB most certainly was not working, and was indeed on the brink of disaster: Barnet Council was obliged to bail it out with a million handout of taxpayers' money.

YCB took the money, and promptly made a third of the workforce redundant, and slashed the terms and conditions of employees already struggling with low pay, and with the most demanding and sensitive of roles in caring for residents with special needs and disabilities.

As reported earlier in the year, it then emerged that YCB had decided to make a massive cut in the salaries of these poorly paid members of staff: a devastating cut in wages of 9.5%.

At a Residents Forum in June, Kate Kennally, the handsomely paid senior officer in charge of social care, glibly informed residents that such 'efficiencies'  were necessary, so as to create what she described as 'a sustainable market place in care'.

As for the staff members who so dutifully provide such vital, sensitive care to our most needy citizens: your mother, my father, your neighbour - well, those employees should simply accept that, as Ms Kennally put it, they needed to 'take a haircut'.

We are very disappointed with the proposed strike action being taken by Unison Members at Your Choice schemes next week. There are no winners in this scenario. YCB staff will lose pay and YCB will lose income.

Yes, the staff will lose pay. They cannot afford to lose it: but they have principles, and put those before monetary considerations.

And they hardly have any other option, do they, than to exercise their right to withdraw their labour, in the face of such injustice?

And: YCB will lose income. Well: that is an interesting thought, is it not? We mustn't let YCB lose income, must we?

Unless, of course, we are Barnet Council, who are playing a very interesting game here.

Let's look at what Barnet Unison are suggesting should happen, in order to resolve the problems besetting YCB:

Barnet Council's own Adult Services have referred only a very few cases to YCB in the last two and a half years.

Barnet Homes, incidentally, has recently had its ten year contract extended ... but only for one year, which is rather odd, isn't it? Only Crapita gets ten year contracts now, it seems and  ... oh ... no, surely not? Is that the spectre of ... something else, hovering in the shadows, something that will divest our social housing averse Tories of obligations, even at arms length?

According to Unison, it has been clearly stated by the council that:

“commercial risk remains with the Council” in which case they must take part in negotiations with Barnet UNISON & YCB.

And ... this thing about YCB ... why is the council so reluctant to use it, and so keen on obstructive practices that hinder its ability to 'trade'? (Market place of care, remember). Your Choice Barnet, only we don't want you to make that choice, for some reason.

Why is Barnet not doing what it is surely obliged to do, and bringing the service back in house?

Could it be ... oh no, Mrs Angry, surely not. Surely Barnet Council would not follow the temptation to allow a service to fall into such a state that, oh dear: look - it must be off loaded entirely to the private sector? 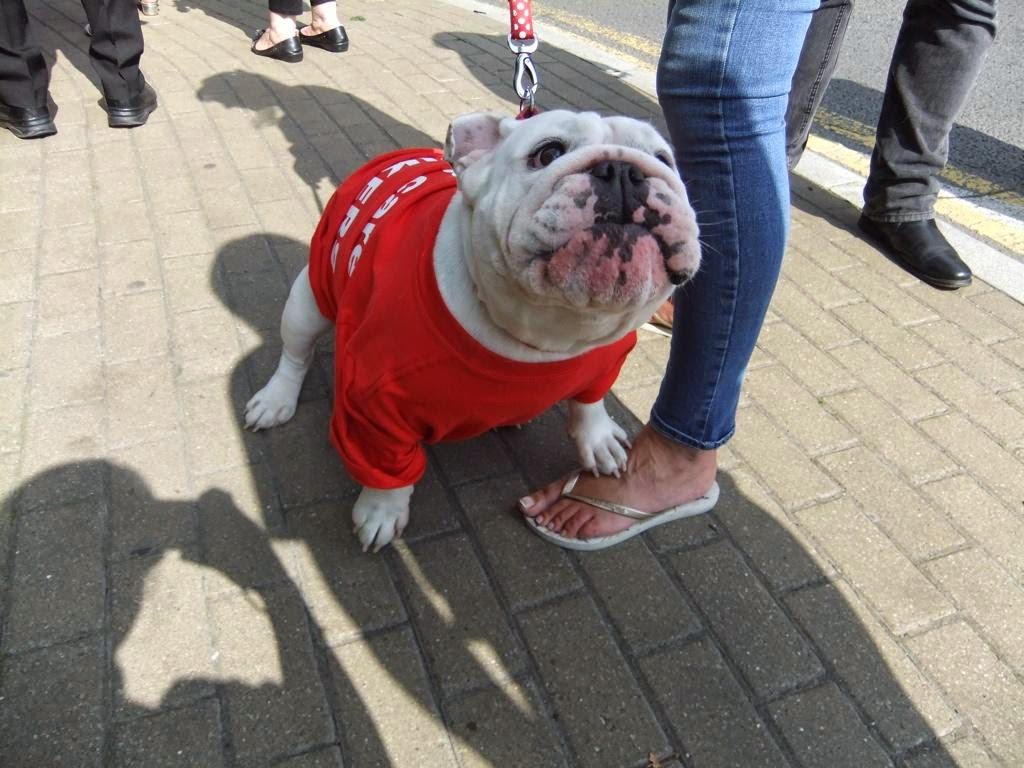 Meanwhile, the fight by Your Choice Barnet workers continues, as planned, over the next six weeks.

Yesterday Mrs Angry headed off up to Barnet House to show support for workers staging a rally outside council offices, and was pleased to see a great turnout, accompanied by a large number of friends from Doncaster CareUK.

Later in the day YCB and CareUK strikers were demonstrating outside a location in the West End, when a limo stopped, out of which emerged, to their surprise, ex Queen guitarist Brian May ... he said he had been driving by, and noticed them, and felt he had to stop and give them his support - see below. 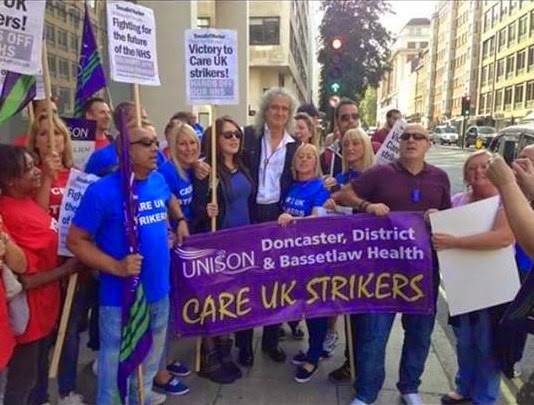 Back in Broken Barnet ... well, normally at these sort of gatherings you get the odd car passing by offering a supportive toot of the horn, but never in Mrs Angry's experience has there been such an overwhelming response from those driving past: it was deafening, in fact. Why? Because people really do care, about care, just as they really feel fiercely proud of the NHS, especially now it is under threat.

Labour councillor and former union convenor Paul Edward spoke to the strikers. Other Labour councillors, Schneiderman, Trevethan and Langleben attended picket lines elsewhere too. Local supporters like Barbara Jacobson were there, as was veteran campaigner John Sullivan, who was, despite his health problems, absolutely determined to come to the rally.

Mrs Angry spoke to some of the workers who are taking strike action, about the sort of work they do. One very charming and sensitive middle aged woman explained quietly,  in careful detail, the sort of learning difficulties presented by the adult clients she looks after: adults with autism, largely, her role being to help them, as she put it, to reach their full potential, and lead fulfilling lives.

Others worked in day centres, helping with activities, or supported living schemes, enabling clients to live semi-independent lives in their own home. One worker helped in much needed respite care, and another specialised in helping with tube fed residents.

The first woman said that many workers had been employed in these posts for years, and could offer the best care for their clients, based on experience, and familiarity with the differing needs of individuals. Some of the people they support present quite challenging behaviour: contintuity of care is of the greatest importance to most clients, but in such cases it is vital, yet YCB is increasingly resorting to the use of agency workers, at unknown cost, and with clearly compromised standards of care for those for whom they are responsible.

YCB has been a lie since day one and continues to be so. This wage cut to staff wages cannot be justified - it is an inhuman act that will place many vital care workers on the breadline, many will no longer be able to meet their monthly outgoings, which will lead to further decimation of disability support services for YCB clients ...

A service is only as good as the staff that provide it, and any Muppett, even Cornelius, can work out slashing already low staff wages will inevitably lead to a deterioration in service quality, and in turn quality of life for YCB clients, but they don't care. 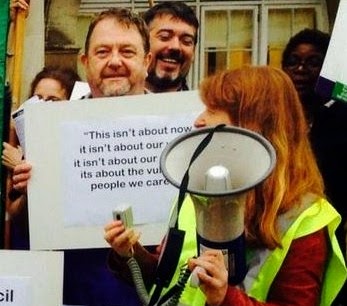 Finchley and Golders Green Tory MP Mike Freer, the architect, or so he likes us to believe, of the 'easycouncil' policy which is the foundation of One Barnet, and the mass outsourcing to Capita of our public services, claimed originally that his vision was for a local council that offered more choice. Your Choice Barnet is the legacy of Freer's half baked scheme: the logical conclusion.

Because John Sullivan is right. Your Choice Barnet is a lie: the usual Tory lie - in this case, the appropriation of the word 'choice' to cover an ugly truth: the delegation of responsibility from a public service to a private sector, not for the benefit of those who depend upon them, the most vulnerable members of our society, and their families, but to create an opportunity for the rapacious outsourcing companies circling over those services, waiting for a new market for their profiteering. Running the service down, cutting the wages of staff to the bone, to make the sell off all the more appealing: is this what it is really all about?

On September 2nd, Andrew Travers, the Chief Executive of Barnet tweeted about a staff briefing to The Barnet Group, which, he claimed,  'sets out opportunities for growth'. It's pretty clear what he meant: the opportunities are not going to benefit staff, or tenants, or the users who depend on Your Choice Barnet.

But this is Broken Barnet, Mr Travers - and, as striking workers sang with Brian May yesterday:

There really is, well: no choice, after all, for those workers being told to have their wages slashed, and for those residents who will bear the real cost of becoming Barnet's latest commodity, up for sale, in the market place of care. 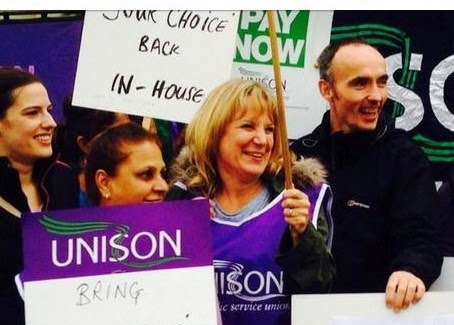