The winter of our discontent, or: another load of old rubbish, from Barnet Tories 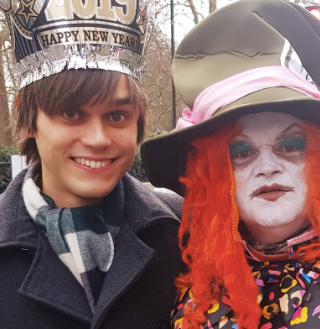 Let us return to happier days, to last September, at the end of a seemingly never ending summer made all the more glorious, for our Tory councillors, by the absence of meetings and council business: a welcome respite from the intensity of focus on their fiscal incompetence - the whopping budget deficit, the failure of the Capita contracts: the massive fraud by a Capita manager, oh - and the incomprehensibly generous loan to Saracens rugby club of £22 million of tax payers' money ...

How glad they were, in July, when it was time to pack their buckets and spades, or flee to the genteel solitude of their second homes in the Dordogne.

Grim reality, for Tory Leader Richard Cornelius, meant kicking off the new term with a tedious duty: a nonsultation event, a one man show, for one night only, doing stand up at the Old Bull theatre, in High Barnet.

Not many laughs, in the subject of setting a budget: but obligatory. And what was the Dear Leader's main concern, as a priority of council spending, you may ask? 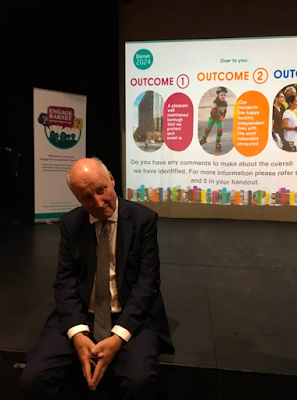 Was it perhaps to support the most needy and vulnerable residents of Broken Barnet? No. Was it to improve the provision of housing for those in need of a home? Nope. Safeguard social care for disabled residents? No.

Tory members see none of these problems, in our borough. As reported then:


Inside the theatre, another Richard stood waiting on the tiny stage, about to give a soliloquy not on our glorious summer, or the looming winter of discontent, but to expand upon a vision of life as it never is and never can be, in Broken Barnet, where everything, as he put it, is Nice, or at least, parts of it are Nice, and in defence of which he intends to make sure the Nice parts remain Nice.

Yes: to Barnet Tories, the only bits of Barnet which matter are the areas where, you know, their sort of people live: Totteridge, Hampstead Garden Suburb: Nice places, safe within the embrace of the Green Belt, or guarded by conservation law: the sort of restrictions which are irritating obstruction to development and profit, anywhere else but the areas where they choose to reside.

Areas which are staunchly loyal Tory wards, and prioritised, as generally Tory wards are, as we have seen from FOI disclosures, and an independent investigation, for largesse from the Highways funds, in order to ... make sure they remain ... Nice.

Oh dear, because Mrs Angry, as you will have read, and with her usual clairvoyant powers, predicted this winter would be, as it has become, a winter of discontent: and here it is: 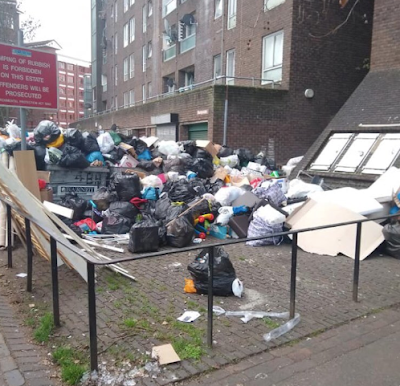 All over the borough, there is now an accumulation of uncollected rubbish: wheelie bins left unemptied, bin bags left in the streets, an epidemic of fly tipping ignored, residents struggling to cope with what is, without any doubt, a total failure in management of a vital public service.

The council's own twitter account can barely cope with the number of complaints from those whose bins have yet again been left uncollected: the timeline is ahem - littered - with furious comments from residents across the borough. Here is one from an estate in Colney Hatch: 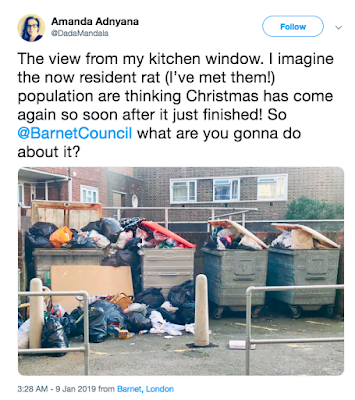 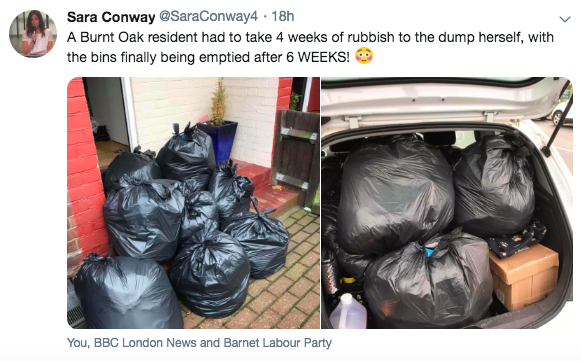 The story has now been featured on BBC news:


You will note that Tory Leader Councillor Richard Cornelius, as usual, when being filmed against a backdrop of social housing, sports a casually tied silk cravat, as a sort of 'up yours' gesture - or perhaps or like a 17th century dandy clutching a nosegay to ward off the Plague, here a talisman against the risk of infectious poverty, from one of those places that are - sharp of intake of breath - not quite as Nice as Totteridge, or Hampstead Garden Suburb.

Richard doesn't think the rubbish crisis is a 'disaster'. In fact he implies the most recent unpleasantness is only due to problems over Christmas, and New Year, due to workers insisting on having time off, to be with their families, or from sickness, that sort of nuisance.

The truth, of course, is that the fault is entirely his, and that of his fellow Tory councillors, and let us not forget the lead member for Environment, Cllr Dean Cohen, who seems curiously quiet, at the moment. Is he in hiding?

The service has been in meltdown for weeks, way before Christmas, for one reason only.

That reason is their decision to cut the service.

Due to their financial blundering, and despite trying to plug the gap in the budget by robbing council reserves, it has become necessary - or so they claim - to make even more drastic savings.

They convinced themselves they could make £750,000 by cutting down on the number of days spent on collecting waste, and cutting out the collection of food waste - despite the environmental impact of such a retrograde step. To get round objections from the Mayor of London (the man all Barnet Tory members voted to label, in a motion that was excruciatingly shabby, even by Barnet Tory standards, an 'Enemy of the People') - they are now pretending that the measure is 'only temporary'.

In the meanwhile, Barnet Tory Easynomics dictates that it is possible to collect the same amount of rubbish in a shorter amount of time, with fewer staff, so that is what they proposed.

Oh, except of course - it seems that doesn't work, after all.

Hence the total collapse of any pretence of efficiency in the delivery of this service.

And no - it isn't the workers' fault. They are not being lazy, or messing about: they simply cannot do the work in the shorter time allowed. It is physically impossible.

At first it didn't seem to matter. Tory members tried shrugging it off. Christmas came and went: they carried on as usual, prancing about, doing what they do best, as seen on New Year's Day: 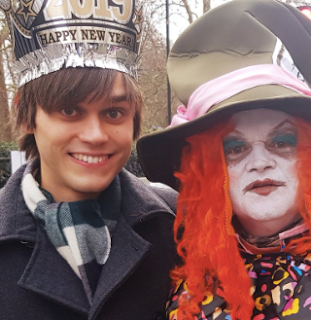 As you will observe, most of the worst areas, purely by chance, are in Labour wards: the poorer areas, where there are more flats, more estate buildings, more accommodation close to shops.

So what if these areas are left as dumping grounds, literally, rather than, more typically, in a metaphorical sense?

So what, if the complete collapse of the clinical waste collection left Barnet residents with disabled or ill family members unable to see the back of weeks of bagged up incontinence pads, told, against all H&S guidelines, to dump them in the wheelie bins that were not being collected, offering all sorts of risk to householders and workers? 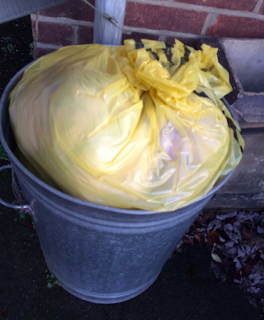 Before Christmas, Labour members who complained about this were told by senior officers and the Leader that the service had resumed. This was not true. Only a couple of days ago was the collection of weeks of this resident's clinical waste taken away.

Oh. But then. The worst happened.

People in Tory wards began to be upset. Oh no!

Their bins were not collected on the allotted day: outrageous!

Their bins were not collected the next week, either: simply unbelievable!

Tory MPs were written to.

Tory MPs had to juggle the impossible demand now: seem to be sympathetic, without criticising their chums on the council, whose ideology is their ideology: nice homes for nice people, and to hell with the rest.

In three marginal constituencies, poised as we are at any moment on the brink of a snap election - what could be a more untimely reminder of reasons not to vote for any Tory political representative?

Because: oh dear me, yes: do you remember the last council election? Last May? What was it that our Tory friends decided to run as their main manifesto policy? Try and think ... 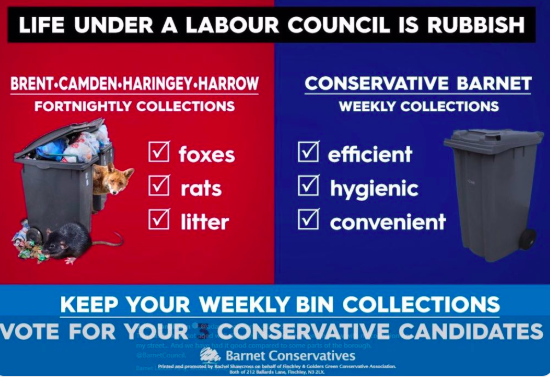 Yep. Couldn't mention the impending exposure of the budget deficit, or the Capita contract failure, or the fraud, so: look, look over there! Let's have a game of #angryaboutbins (© Mrs Angry); the favourite dodge of any Tory candidate with nothing else on offer.

Easy to scare Tory voters with the awful thought that rubbish won't be collected. The very idea! So here in Broken Barnet, our scheming Tory members, desperate for distraction from their own ineptitude, decided to smear Labour by inventing a threat that was simply untrue: that if elected, they would mess with the regular collection arrangments. Ha.

That went well, didn't it, Tory councillors? Hoist by your own f*cking petard ...

As soon as the election was over, the true state of the council's fiscal peril was revealed.

Figures were 'readjusted' - but no explanation was ever given as to why a mistake had so badly underestimated the deficit, pre-election, and no one lost their job, or resigned, of course, even when the disclosure of the Capita manager's fraud exposed an entire network of council processes left with virtually no effective financial controls in place.

The next step we should have expected. Having centred their manifesto on the grim warning of rubbish mountains created by wicked Labour, wicked Tories created one of their own.

But the cost of this folly is in line with the rest of their nonsensical financial policies, as seen in the mythical Capita 'savings'.

In order to begin to address the accumulation of rubbish around the borough, the council has been forced to SPEND barrow loads of cash: estimated at £15-20,000 a week on overtime, extra staff etc.

You can work out for yourselves how quickly the 'savings' promised from the cuts in service will be outdone by expenditure on fixing the damage. Easynomics, once more.

In the meanwhile, the landscape of Broken Barnet lurches into eternal winter: yes, a winter of discontent, erupting in a plague of festering rubbish, attended by rats, scavenging foxes, and a burgeoning sense of doom.