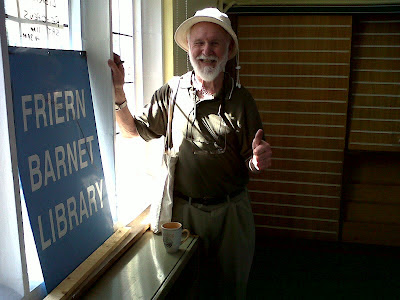 Keith: local resident, and one of the original occupiers of the library, back where he belongs ...

Another day, another chapter in the increasingly surreal story of Friern Barnet Library: the library that refuses to curl up and die, and has now been given a new lease of life by the occupation of community squatters who have pledged to return the building to the purpose for which it was built, a library for the people of Friern Barnet. 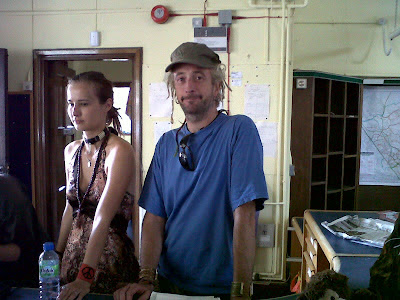 Phoenix and friend: the new librarians

The spokesman of the squatters who have taken up residence in this library is 'Phoenix' - rather an apt identity, in this situation, symbolising a new hope for local residents and library campaigners, rising from the ashes of their proposals which were so contemptuously rejected by the Tory council, in stark contrast to the fawning indulgence shown to the cosseted millionaire residents of Hampstead Garden Suburb, whose volunteer library is being supported at a cost far in excess of the plan submitted by the less privileged residents of Friern Barnet.

After the occupation, local campaigners decided to renew the Saturday pop up library on the green outside the building. The new occupiers announced that they would open up the library to residents, and offer the building to them for the purpose intended, eighty years ago, with the aid of a grant from the trust begun by the philanthropist Andrew Carnegie: to provide a resource for the education of the ordinary working man and woman. 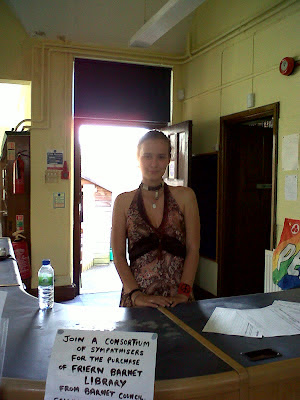 The Tory run council of Broken Barnet sees the library building as something rather different, of course. It is not a resource belonging to the community: it is a nascent development opportunity: a branch of Sainsbury's, or a free school. It has an annoyingly beautiful building on the site, but it is not listed, so could be demolished, and take the nominal value of the site from £400,000 or so into perhaps ten times that. Such a sum would be very welcome to our Tory councillors. It might even pay the £275, 000 monthly bill for our One Barnet consultants at Agilisys/iMPOWER.

Mrs Angry went to visit the pop up library today. When she arrived the stalls were outside, but everything was pretty low key. Feeling very naughty - why, Mrs Angry? - she slipped into the building to see what was happening. Was she breaking the law - trespassing? No: as it happens, the council has written to Phoenix and fellow squatters, recognising their occupation and therefore designating them as licence holders. And who cares, anyway? By the laws of natural justice, this building belongs to the people, not to the grubby little Tory council which, in Mrs Angry's view, formed over a long period of contemplation, is morally bankrupt, and has lost all claim to any authority over the electors of this borough.

The newly opened library soon attracted a large number of visitors. Labour leader Alison Moore and deputy Barry Rawlings arrived, with Pauline Coakley Webb and Arjun Mittra. Local residents and traders came in to say hello. Outside a number of residents and campaigners gathered under the cherry tree and discussed the new developments. 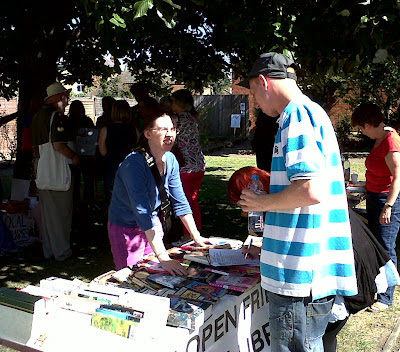 the pop up library today

Mrs Angry had a very interesting conversation with Dr Oliver Natelson, a local environmental campaigner who this year was deservedly given an Observer Ethical Award for his many years of community work, and had come to the library to offer tuition to local residents. Mike Gee ran a slide show on local waterways, and ran a Thunderbirds film show for children. A community resource, in other words, was being used by the community. 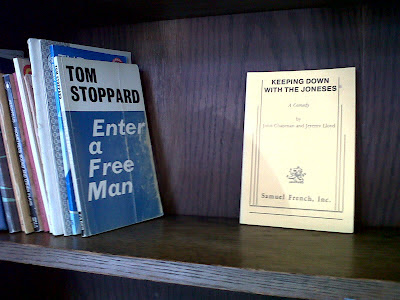 But here's the thing. As far as Mrs Angry is concerned, Phoenix and his friends are morally justified in what they are doing. He seems to be acting according to a set of values, a moral code - contrast this to the grasping motives of our Tory council, and the way in which they have deceived and betrayed the residents of this borough. 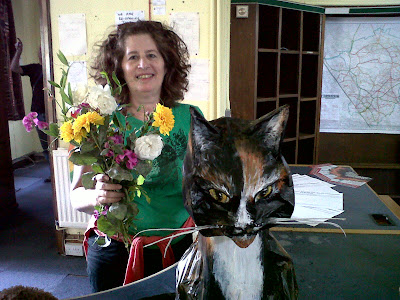 A local resident arrives with some flowers for the library

But the extraordinary fact remains that our Tory councillors have instructed senior officers to engage and negotiate with the squatters who have taken possession of the former Friern Barnet library. Their immediate reaction to the occupation was not to challenge their action, but to offer them another site within the borough for a community library. They have sent a long letter to the new occupants, (* see below for link to Barnet Eye's clip with Phoenix reading this out) which Mrs Angry has seen, going into great detail as to the proposals they have which the squatters might consider. Quite incredible. 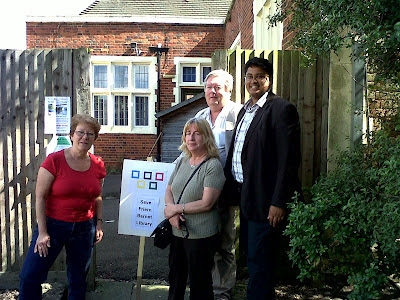 The residents who are members of the Save Friern Barnet Library campaign, and have struggled over so long to defend their library, have been completely sidelined.

What sort of message does this convey? 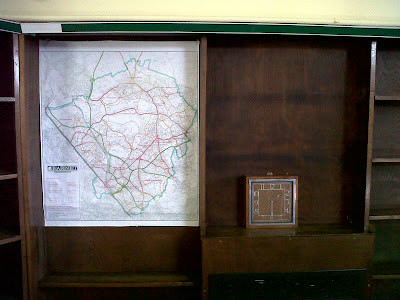 You might think that a Tory council would be very much on the side of law and order, and refuse to negotiate with squatters. After all, the local MP, Mr Mike Freer, the former leader of the council, the father of One Barnet, and still a huge influence on the empty headed Tory councillors, has just seen his new anti squatting legislation enacted: all inspired, as you may remember, by the appalling shock of a mansion in Hampstead Garden Suburb - owned by the Libyan dictator Gaddafi's son - being occupied by political protesters.

Dear me. But no: it seems the language of force is the only one recognised by Tory Barnet. In fact, it would seem that they even have a sneaking respect for such tactics, and are happy to play along with its rules of engagement. 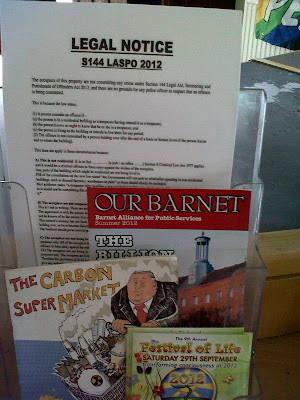 legal notice displayed by the new occupants of the library

The campaign so carefully and passionately supported by residents over the last year or so, organised by the properly constituted Save Friern Library group, which has widespread support in the community, has been completely ignored. Councillor Robert Rams has no interest in anything they have to say.

He has tweeted misleading comments about engaging with 'a local group' to open a community hub on the library site, as part of a development, but this is hogwash. Having made some enquiries about this, it seems clear to Mrs Angry that this is not being seriously considered, and does not represent the wishes of the wider community, much as a community hub would be welcomed somewhere in the area.

In the meanwhile, interested parties have been reported as making enquiries as to the purchase of the building.

On Monday morning, at 10 am, Captain Craig Cooper, Barnet's Director of Commerce, and two senior officers from libraries, will be meeting not the local residents and campaigners' group, but the activists from Camden who have taken occupation of the library - the squatters - in order to continue negotiations with them over a proposed community library. Phoenix and his friends have asked that local campaigners and residents attend this meeting too.

Yes: the world has gone mad.

Let's leave this post with a picture of two local residents who so desperately want their library to remain in their community: here is Alfred, and his shy, delightful boy Fred. Alfred has come to this country from the unspeakable horrors of genocide in Rwanda, a single parent whose five motherless children loved to visit their local library and indeed spent lots of time here, supported by what he described to Mrs Angry as the lovely library staff, dedicated professionals who saw their role as integral to the local community. Mrs Angry asked if the children were able to travel to any other library now.

No, said their father, sadly. 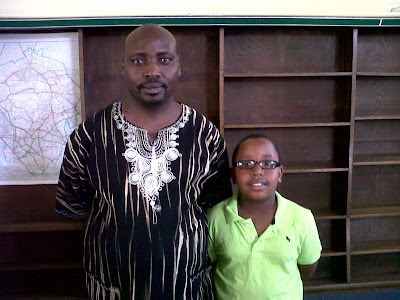 Alfred, his son Fred, and the empty shelves of their local library

It's all been said, really, hasn't it?

Alfred, who is, Mrs Angry understands, a classicist and academic, mentioned that back in Rwanda now, a library network is being established, as part of the rebuilding of the traumatised country's infrastructure. Back here in Broken Barnet, of course, and throughout the country, under the cultural warfare of our coalition government, we are tearing out the heart of our once glorious library system, just as we are about to destroy our National Health Service, and our welfare state.

The tale of Friern Barnet library tells a much bigger story than it first seems, doesn't it?

The tale continues. What will happen next? Mrs Angry predicts some more surprising developments will enfold.

Councillor Robert Rams, the Cabinet member responsible for libraries, has been away for the last couple of weeks, after his recent marriage.

Congratulations, Robert: but, know what -

I think the honeymoon is over. 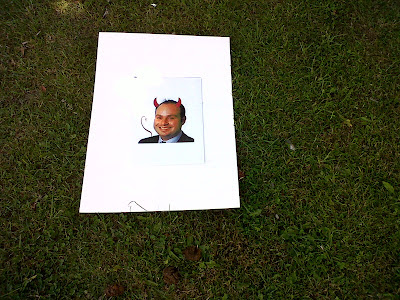 Robert Rams, above. Dog shit, below.

just briefly to say if you nip across to the Barnet Eye, here:

you will find a clip of Phoenix reading out the astonishing letter from Barnet Council to the squatters, offering to cooperate in their wish to run a community library. Plus Mrs Angry laughing in an unseemly fashion at the side.

ok: now I have nicked this clip from the Barnet Eye, for your enjoyment. Listen to the enormous interest our council is showing over the new proposals from Phoenix and his fellow squatters. If only they showed such enthusiasm for the proposals made by the Save Friern Barnet Library campaigners.

Labels: community, like a phoenix rising, our barnet not one barnet

People have asked why I think that One Barnet will be a huge cock up and will cost the Barnet Taxpayer hundreds of millions.

I now have the answer. The geniuses that send letters like this are the same geniuses who think that the private sector will not take them to the cleaners.

The thing that makes me laugh the most about this letter is the query as to whether the squatters have given due consideration to 'risk management'. Oh dear, Captain Cooper, I think Phoenix & chums have probably got a better grasp of the issue than you and your One Barnet team, if we are to be brutally honest ...