We have decided to form a Joint Venture - or: who really runs Barnet Council 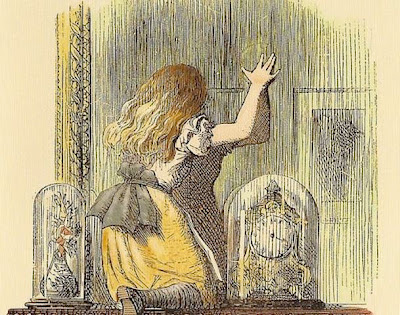 Broken Barnet: through the looking glass

Time to review the rather astonishing events of the last week, here in Broken Barnet.

A week of disastrous revelations for our Tory masters, and indeed of huge embarrassment for councillors and senior officers alike. And all because of an email sent by one officer, letting slip something she should not have - the announcement that a massive turnabout is to take place in the outsourcing of £275 million worth of council services.

Until last week, the council was still set on entering a Strategic Partnership with the lucky winner of the DRS bid. It was rather surprising therefore, to read in a missive by Ms Pam Wharfe, the 'Interim' Director of Environment, Planning and Regeneration, (possibly now a little more interim than she was this time last month) that this was no longer the case. Nothing much had happened, she informed staff in a routine newsletter. Oh, except one minor thing. Forget the strategic partnership model, which has been the one adopted and pursued all the process so far. We have decided, she declared, to form a Joint Venture.

A Joint Venture is the perfect answer for any bidders who may have become, shall we say, a little unsettled by the thought of investing their company's future in Barnet, where our council has proved itself to be utterly incompetent in the management of procurement, tendering and contractual obligations, indeed has been demonstrated to be incapable of understanding the need for compliance with the most basic legal requirements regarding procurement, and is still labouring under the burden of non compliant contracts which they cannot be bothered to regularise. Such slatternly housekeeping is not an attractive look, for potential punters arriving in the front parlour of the One Barnet House of Fun.

No doubt too that the bidders have been rattled by the unceasing attentions of the 'pulsating' blogosphere that thrives here, by our reporting of the incompetence and infantile political wranglings of our Tory councillors. The bidders know that if they commit to taking over our services they are going to have everything they do subject to constant scrutiny, the Barnet bloggers sitting on a chair in the corner of the bedroom, while they get down to business. It will not be conducive to the most mutually satisfying intimate encounter that one might hope for.

The bidders hold the upper hand now, and could just walk away, even at this late point in the proceedings. This is making the senior management team awfully worried. Also worried are the some of the more sensible Tory members of Barnet Council, who are able to see that the business case for One Barnet is simply nonsense, and an incredibly high risk strategy. They are of course also worried from their own point of view, as the downfall of Brian Coleman, and the Labour by election wins, make it clear that there will very likely be many formerly safe Tory seats lost at the next local elections. Shame.

Who has the most to lose from One Barnet failing before it even begins?

Is it the Tory councillors?

It would be embarrassing, but they would get over it - certainly in time for the election. They might even benefit from taking a stand, and being seen to be taking a difficult decision for the good of the community.

What about the senior management team, then?

Hmm. Of course in a properly run council, run properly, and democratically, for the greater good of the residents, the elected representatives of the residents are in charge of the policy making decisions of the authority, with only administrative business delegated to officers.

Here in the corporate dystopia of Broken Barnet, a looking glass world where everything is upside down, and the inversion of what it should, or might, be in the real world, it is not the councillors who are in charge, it is the highly paid senior officers, the senior management team.

Our senior officers are absolutely devoted to the tenets of One Barnet, and like a team of Victorian evangelists let loose in some far flung out corner of the globe, are working dutifully here in our borough to spread the word of privatisation, and open up another tradepost for the outsourcing Empire. And if the native population is unwilling to embrace the church of outsourcing outright, it must be established by stealth, and cunning.

Look again at the words of the interim director, Ms Pam Wharfe, in her rather panicky message, a week after the regular 'fortnightly' email to staff on Friday - she is now seeking to present the joint venture decision as no longer a decision, but a proposal, claiming:

So, after discussions with bidders, the project Board recommended the new plan to Corporate Directors Group. What does this mean?

The Corporate Directors Group is what you might expect it to be, a body with no executive power, comprising all the Barnet directors. Mrs Angry is told by her informants that this group is remarkably discreet, and rather secretive, and yet ... surprisingly animated in terms of the free exchange of opinions. Mmm.

By project Board, we must assume Ms Wharfe is referring to the DRS Project Board. Aha.

Earlier this year fellow blogger Mr Mustard asked some awkward FOI questions about this little known body - who, he asked, were the members?

The eventual answer revealed that there were eight members - four senior officers, as follows:

two unnamed and less senior officers, oh, and how interesting - two others who, we were told,

"... are employed by the Council’s partners (i.e. employees of external companies). The Council does not hold information regarding their salaries. We are unable to disclose their names as this information is exempt under section 40(2) of FOIA."

Mr Mustard was surprised, and responded as follows:

"My original question did not anticipate that any of the Board could be employed by external companies.

As such I would like to ask for the following information in respect of each of the two individuals:-

the name of the supplying company

the date they started

the hourly, daily & weekly fees paid to the companies (not the rate paid to the individuals)

That was on the 28th March. Not until the 24th May did he receive a reply which merely stated:

"I would like to apologise for the delay in responding to your below request.

I can confirm that the supplying company is Agilisys/Impower and we do not hold any other information related to these individuals."

Oh. Individuals supplied by our dear (- very dear, £250,000 a month) friends and consultants, Agilsys/iMPOWER. But no other details. What a shame. So Mr M tried again, feeling he, unlike our favoured consultants, had been shortchanged.

I have asked for the names of the members of the DRS Project board.

You seem to be suggesting that Impower/Agilisys can send along any 2 consultants which I simply don't believe.

Please tell me the names of the 2 individuals who are members of this board and then tell me the daily rate paid in respect of their services to Agilisys. "

That was on May 29th. After three months, there has still been no response. Wonder why? Are some of the consultants from Agilisys/iMPOWER familiar names? Or just awfully shy?

So: just to recap.

The 'decision', which has not been made, to dump the strategic partnership model for the outsourcing of the DRS services, was made, but not made, by Ms Pam Wharfe, Captain Craig Cooper, a couple of assistant directors, a couple of other officers and two unknown, and unaccountable consultants, and recommended to Ms Pam Wharfe, Captain Craig Cooper, and their colleagues.

Mrs Angry is looking forward to seeing the minutes of that meeting.

Perhaps Mrs Angry has blinked and missed it, but she has not seen any opportunity for the elected representatives of the council to be involved in the process of what passes for consultation in regard to this enormously significant change in policy.

The democratic process, you know, senior officers of Broken Barnet: have you heard of it? Quite the rage, in some places.

And so, yes: it seems pretty clear what has happened.

The senior management team in this borough is so used to driving the agenda, and prodding the compliant Tory leadership into line with its own wishes; it has become so used to taking all the major decisions, that the need to show outward respect to the niceties of democratic oversight has become increasingly less well observed, to the extent now that it was, in this case, forgotten altogether.

This may prove to be a regrettable omission.

You have nothing to lose but your fear, your sense of impotence, and an increasing awareness of your total alienation from the electorate of Broken Barnet.

Come on: remind your senior management team who's boss, and take back control of your own council.

One Barnet is dead: time to bury the corpse.

Barnet is broken, and yes: it is time to fix it.

Labels: Tory councillors of the world unite, you have nothing to lose full stop

I must send this FOI request off to the ICO on Tuesday so that they can see how utterly hopeless Barnet Council are when it comes to FOI. I did just get a reply to something else after 8 months of delay so it looks like this one is due for a prod like the councillors who are meant to be looking after our interests and are asleep.

In a sense, the political leadership cannot complain - it wants a libertarian system of control that means it meets twice a year, say, to monitor the new council contracts, before adjourning for dinner.

This is the system attempted but abandoned everywhere else in the UK, as far as I know, but which applies to some small administrations in the US.

It is the Barnet Tea Party.

The leadership would not expect to be closely involved in choosing the winning bids, or the technicalities of service company ownerships.

That is why Richard Cornelius said the wrong thing, in not backing Pam Wharfe. He tried to triangulate things, to be chums with everyone. That meant she had to embarrassingly row back only seven days later.

I wonder if the new series of 'The Thick of It' needs some plot lines from Barnet.

I like the idea of prodding Tory councillors. My own weapon of choice would be a very sharp stick, or an electric cattle prodder.

Mmm, Baarnett: except some of the characters in the Thick of It demonstrate some grasp of strategy, and wit. Not awfully sure our Barnet senior officers are quite in that league ...