A week in Broken Barnet: Tories in retreat, under siege - and preparing for worse to come 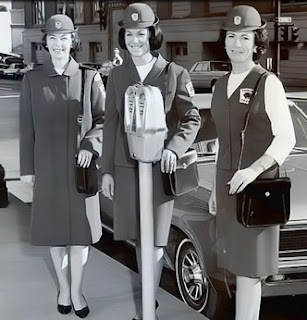 Back to the future: Barnet Tories reintroduce parking meters

Forced to admit defeat over the plans to sell off the library that would not die, and agree, with forced smiles, a licence to remain with local campaigners, and now look: another u-turn, this time on parking.

Well, we say u-turn, as our Tory chums now find themselves heading once more in the opposite direction to a former policy decision: in fact this was not so much a calculated response as an unfortunate accident, a total loss of control of the One Barnet juggernaut, slipping on the black ice of resident rebellion, and ending up on its back in the middle of the High Road, North Finchley, just outside Cafe Buzz.


A press release about the new idea appeared on the council's website on Friday: Mrs Angry's impertinent remarks in red:


Barnet Council is making parking easier by installing pay and display machines that use credit and debit cards.

Having made motorists' lives intolerable, and wiped out 40% of trading footfall in your local high street through our idiotic parking scheme, we are now going to try to undo some of the damage, or at least convince you we are doing so, before next year's elections. We will therefore replace the parking meters we removed, at your expense, and expect you thank us for it.

The first of the new 16 parking payment terminals are currently being installed and more will follow in February in the local town centres.

To pay for parking, motorists insert their credit or debit card and choose the amount needed, based on how long they want to stay.

We will not do the one thing that everyone wants, and allow the meters to take cash as they used to, as that would make us look like the incompetent fools you already know we are, and Mrs Angry will say I told you so.

Councillor Dean Cohen, Cabinet Member for the Environment, said: “This initiative is part of our ongoing commitment to supporting local businesses and the public on our high streets, offering them further choice for easier parking.

We have remembered that we are Tory councillors and are supposed to have a commitment to supporting local businesses and the public on our high streets. We will backdate this commitment by calling it 'ongoing', and hope that Mrs Angry does not spot this interesting turn of phrase. We also hope she does not notice the use of the word 'further' as in 'further choice for easier parking' as of course there has been no choice for easy parking since Councillor Coleman, with our full support, implemented this catastrophic scheme.

“We have listened to the public and traders who felt pay and display would help those that do not have access to a mobile phone, smartphone or the widely available Scratchcards.

We are now pretending, after more than a year of protest, that we give a shit what the public and traders think, as we have only a year to try to redeem ourselves in the eye of the Barnet electorate. We have heard of mobile phones, smartphones and scratchcards, but we have never heard about the easy method of payment called 'cash'. This is because as Tory councillors we all have free parking permits anyway and do not have to depend on any payment methods.

“This new method complements our other methods of payment, and the new machines will make it easier for motorists, shoppers and traders, who won’t need to search for cash.”

On Friday we used the word 'compliments' and Mrs Angry made fun of us on twitter. The Tooting Twister has had his pencil confiscated, and given to someone who can spell, and has a basic grasp of the laws of grammar.

We are ignoring the fact that residents want to pay with cash, and do not want to search for, or use, a card in order to park, especially older residents, who will be made vulnerable to mugging and distraction crimes should they be forced to use such methods in public.

The first machine to be installed is in Lodge Lane carpark in North Finchley, and the rest will roll out next month.

The first machines will be just around the corner from Cafe Buzz, because we are scared of anti parking campaigner Helen Michael, and think this might shut her up.

Marvellous news. Wonder how much this whole farce is costing us, the taxpayers of Broken Barnet? Mrs Angry is sure that Messrs Reasonable and Mustard, who are good at adding up, will be able to work it out.

Just a thought: why was the option of retaining meters, or installing meters which could take cards and cash, not considered as part of the contract with NSL, the lucky winners of the parking payment tender? It's a shame we can't ask the interim parking manager who came to Barnet to oversee this process, isn't it? He's left now, sadly.

Anybody know where he went?

Busy week ahead, anyway: Tuesday, the ceremonial handover at Friern Barnet Library, Wednesday ... ooh, a trip to Uxbridge, to attend the trial of Councillor Brian Coleman, on two charges relating to an alleged assault on Cafe Buzz owner and local traders' spokewoman Helen Michael. Councillor Coleman has pleaded not guilty to both charges.

*Updated Monday: in fact Coleman's case has been adjourned, so don't bother turning up in Uxbridge on Wednesday ...

It's clear, in fact, that Tory Barnet is under siege from all fronts at the moment: humiliating climb downs on key policies, the embarrassment of the trial of a former senior Tory councillor, and oops, oh dear, things are not going awfully well with the old One Barnet £1 billion outsourcing thing, are they?

Staff members were suprised last week to find that a promised meeting with their new bosses at Capita was cancelled, as Mrs Angry understands, at the last minute, following legal advice regarding next month's Judicial Review hearing at the High Court.

As acting CEO Andrew Travers explained to staff in a newsletter:

‘I mentioned last week that a date has now been set for the Judicial Review of the Capita and DRS contracts. I remain confident that the court will find in our favour so that the NSCSO contract can commence in May. However, this timescale depends upon the council receiving a favourable judgement within a month of the court hearing. Of course, we respect the authority of the court in these matters so cannot take any decision for granted, and we have therefore delayed the decision-making process for the proposed DRS contract until after the court has reached a conclusion. The good news is that the prospective deal with Capita is structured in such a way that a delay of only a month or so will not delay their investment in services nor require us to re-open the proposed budget for next year.

Judicial Reviews of council decisions are an increasingly familiar part of the local authority landscape. Some of you may have noticed in today’s papers that several London councils (not Barnet) are facing legal challenges to their new policies on Council Tax Benefit. Judicial Reviews challenge the way in which a decision was made, rather than the outcome of the decision making process. The court does not replace the decision-maker’s conclusions with its own.*See below

Interesting: Black Hole's tone differs somewhat from the recent rather hysterical outbursts from Tory leader Richard Cornelius, who has been claiming that the Judicial Review is costing a million pounds a month in 'lost savings' or some such tosh, and Travers also seems to be rather more philosophical about the possible outcome.

As he states, JR's examine the process in which the decision was made, rather than assess the merits of the decision in terms of policy.

So Barnet has nothing to worry about, then, as long as the process was not flawed in any way, has it? Ah.

Oh well. Let's see, shall we? And of course, if it transpires that the process was flawed, who is responsible for that? Ultimately, the elected members themselves, who will have only themselves to blame for any failure in scrutiny or overview of the whole sorry business.

It's called accountability, councillors, and if you've cocked up, don't blame the residents who are desperately trying to maintain some sort of democratic control over their own futures: take a long hard look at yourselves, and have the grace to admit you got it wrong - badly wrong. Who broke Broken Barnet? You did.

Now it's time to return the compliment: you're holed up, under siege, and we're outside the walls, waiting for the end.

Watch it all fall down.

*In fact Travers is not quite correct: Mrs Angry understands that illogical or irrational decisions are a basis for challenge by Judicial Review. One might well conclude that the entire One Barnet outsourcing project is tottering on a foundation of irrationality, so it will be most interesting to see what their Lordships make of the matter, won't it?
Posted by Mrs Angry at Sunday, February 03, 2013

Labels: capita, cocked it up, compliments of the season, on the skids, One Barnet, take a long hard look at yourselves

I did write to the council suggesting that the 10 machines they hadn't yet scrapped could be retro-fitted with the card-reader to save money but apparently this was impossible (even though they are modular in design and look like they can be configured any old way you like).

What I wasn't told was that there seemed to be a problem finding the keys for the retained meters.

What I am not told now is anything at all as I have somehow piled up 23 requests that are deemed vexatious even though they are really innocuous.

I sense another PR disaster waiting to hit the council when the ICO reminds the council of my freedom of speech and that they can't not answer questions just because Mr Mustard sends them.

The council has a thing about keys, doesn't it?

On the one hand is apparently cannot find the keys to ten parking meters.

On the other hand, it leaves the keys to Friern Barnet library just lying around.

And isn't there that building in Victoria Park that you found wasn't secure, either?