Friday joke: I'm a lady - or: sex and democracy in Broken Barnet: a wholesome tale of discipline, bondage, gagging and restraint 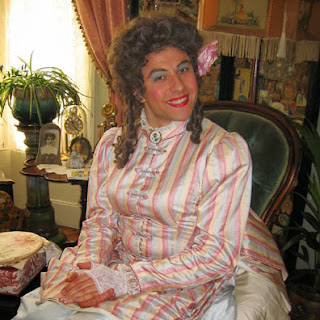 Tory Councillor Joan Scannell: I am a lady, and I am not offended

There was a meeting last night of Barnet's Constitution and Ethics Committee, which was not attended by Mrs Angry, but is reported by Mr Reasonable here:

The title of the post says it all, really.

You may be surprised to learn that our Tory councillors feel obliged to debate any issues to do with the constitution, let alone ethical matters, and indeed it represents a real challenge for them, used as they are to acting entirely according to their own selfish, blindly ill informed impulses, but they have made some of their most memorable decisions here, such as the proposal by Councillor Melvin Cohen to silence residents at their own Forums, and forbid them from even mentioning any reference to council policy, let alone criticise such matters.

This decision led Barnet Council all the way to the High Court, and a Judicial Review of the One Barnet programme of outsourcing, which has delivered us into the sweaty embrace of Capita plc, for the next ten years. The refusal  by our Tory councillors to allow debate of the programme, and their failure to consult over such a momentous move was found to be in breach of the law. The JR was lost on a matter of timing,  but the Judge's findings on consultation was absolutely clear.

Our boneheaded councillors have learnt nothing from this experience and last night, again led by Cohen, actually voted to cut public participation in committee meetings: all questions and all addresses to committees must now be shoved into a mere half hour of token debate, in an attempt once more to silence any debate, and restrict the involvement of the people whose challenge of council policy is so dangerous.

You may recall the preposterous boasting recently in the Guardian by Mr Chris Naylor, Chief Financial Officer, that 'the default mode of Barnet Council is open government'.

This claim was somewhat undermined by the extensive, or even, you might say, manic redacting of the Capita contracts, whose publication we had been promised as proof of a new era of transparency and love between the council and the residents and taxpayers of Broken Barnet.

Sadly, Mr Naylor, open government cannot function if the residents and taxpayers of Broken Barnet are excluded from the very process of engagement, and what passes for democracy in this borough. You might need to explain the fundamental principles to Councillor Cohen and his squirming accomplices in the war against free speech.

But there was more innovation from Melvin Cohen last night. Not satisfied with his anti-democratic move to prevent any robust challenge from residents within the committee room, he had another task in mind: putting the women back in their place.

As Mrs Angry has often observed, the mindset of our Tory councillors in Barnet is fixed firmly in the past, the glory days of the seventies and eighties, when life was so much more simple, and Conservative values were as they should be: more or less interchangeable with the present day agenda of UKIP: anti lots of things: Abroad, THE UNIONS, Red Tape, oh, and Womens Lib. Feminism and political correctness had not been invented then, of course, and all that sort of stuff has passed by the empty heads of our elected members, as you may observe in any meeting where they give in to their swivel eyed loon views on such subjects.

True, Barnet Tories are still in mourning for their beloved lost MP and PM, Margaret Thatcher, who was, oh dear, a Woman. But then, she was not really a Woman, having, like Elizabeth Ist, a weak and feeble body,  but the heart and stomach of a king, and, under the tailored skirt ... wielding an enormous strap-on of eyewateringly uncompromising policies.

Last night Councillor Cohen, who perhaps of all the Tory councillors ought to be the most grateful that in the real world outside Broken Barnet we no longer live according to the rule of bigotry and outdated stereotypes, announced last night that he wished to change the title of committee Chair back to 'Chairman'.

Despite all opposition, Cohen used his casting vote to ensure that this proposal is now adopted.

According to Mr Reasonable:

"Objections from Cllr Alison Moore that the title would be offensive to women were dismissed. Indeed Cllr Joan Scannell said "I am a lady and I am not offended" to which Cllr Moore replied I may not be a 'lady' but I am offended".

Councillor Scannell is of course the sort of woman that Barnet Tories prefer. She is allowed to chair the odd meeting, with a quavering voice, and usually wearing a curious outfit that looks like a velvet housecoat, as if she had been interrupted while doing a spot of dusting, or cleaning behind the fridge, looking very anxious, and uncertain of how to proceed. She lacks authority, because she knows she has none.

There are no young women in their party, only women of a certain age and beyond, preferably married to a Tory councillors, and these women are required to be submissive and loyal, and do as they are told by the men, who consist of a bunch of reactionary old codgers, and a bunch of reactionary wet behind the ears boys.

Only once has a woman stepped bravely out of line, sort of, when Kate Salinger famously dared not to oppose, but to abstain, from the outrageous vote to award themselves big fat rises in their allowances, a proposal sneaked in at the last minute, yes, to avoid debate, and at the same meeting where residents were warned of the forthcoming storm of austerity measures, and swingeing cuts in budget.

In the name of what Brian Coleman described with relish as 'discipline', Kate was punished and humiliated by an immediate public stripping of all her positions by her colleagues, and left the council chamber in tears, as they looked on, unashamed, and unmoved. She was helped down the stairs by a female Labour councillor.

The position of women in any society tells you all you need to know about the health of its democracy: in a borough in which the Tory party uses its power to stifle debate, impose injustice, and sell its citizens into bondage to the private sector for the profit of others, what more can you expect than that they should seek to humiliate women, and force them back onto their knees? In Barnet, the politics of gender are as the politics of the market place: to win you must dominate, and rule, rather than negotiate, and consult. Women are like the electorate - to be used, and fucked, and kept under restraint.

Except of course - Barnet's Tories may try to rewrite history, and cling on to their sense of dominance, and neo sexist attitudes.

They have failed to grasp that they are themselves history. 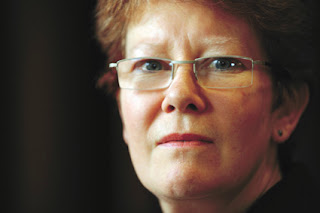 Labels: cleaning behind the fridge, I am offended, Melvin Cohen, strap-on, Thatcher

Well despite the changes Barnet still sounds like a beacon of democracy on the public questions front compared to here in Wirral.

The only exceptions to this are five minutes speaking for a qualifying petition of twenty-five households or more at a Planning Committee and very rarely at a Licensing Act 2003 subcommittee if a resident objects to a new (or changes to anexisting) licence to serve or sell alcohol.

Apart from constituency commitees (again about 3 or 4 times a year) which are moving to the question in advance format too, there are no other opportunities for the public to ask questions. So they basically get about 16 chances a year, with the requirement to submit a week in advance leading to canned answers.

At all other meetings speaking by the public is at the discretion of the Chair which is rarely granted.

So if you think the situation in Barnet is bad, try coming to the Wirral where at 95% of meetings the public don't get to speak.

Mind you this is also the authority that bullied a former employee and whistleblower into signing a gagging clause as part of his compromise agreement. When it all came out later it turned out the whistleblower knew of about £27 million of bad debts in the Department of Adult Social Services.

As usual though the senior managers involved left the employ of the Council paid off to the tune of £110,000 each to leave before this was known by the press and public.

So if you think Barnet is undemocratic, try coming to Wirral!

To give one example from recent years, the Labour/Lib Dem adminstration voted a budget to close half the borough's libraries claiming they didn't have the money.

A Labour minister ordered a public inquiry and the plan (in the report of the independent person Sue Charteris who led the inquiry) was deemed to be unlawful.

So as not to prejudice the outcome of the inquiry the closure plan was put on hold, once the Council got an advance copy of the draft report of the public inquiry there was a U-turn announced (although they never quite explained where they got the £million needed to keep them open). Officially they just said the whole process had taken so long that it wasn't worth closing them anymore as the saving had been reduced.

However, in parallels to Barnet the key finding of the public inquiry was that they hadn't consulted properly on their closure plans before reaching a decision.

Due to the dramatic U-turn the minister didn't take any further actions against the authority.

So it just goes to show that there are similarities in politics between Barnet and Wirral doesn't it?

Oh dear. Yes, I'm afraid there are similarities with too many local authorities around the country - in England and Wales. It is a symptom of a corrupt system, a disease that eats away at the democratic process where there is a deficiency in scrutiny. Pickles talks the talk about the taxpayer playing the part of the armchair auditor, but really what is needed first of all is an efficient and independent process of external audit.

Historical footnote - Margaret Thatcher and her tailored skirts: for some reason Mrs Angry feels obliged to remind readers of a fond memory by one of her former ministers after her death this year, on which he revealed her curious habit of always pulling the back of her skirt right up, when sitting down, so that she did not sit on it and cause creases ... ooh, er: bit of a turn on for you Tory boys, no?