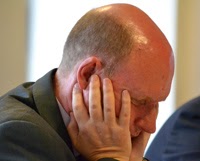 So ... as our former Monitoring Officer would begin all her remarks ... So: where were we?

Ah yes: our former Monitoring Officer, see? Gone, but not forgotten. Gone where, Mrs Angry, I hear you ask? Not sure, but it is 'by mutual consent'.

All the best things happen by mutual consent, don't they? In the bedroom, in the boardroom, in the free world, where life continues without the bondage of contractual obligation, or the frisson of fear that comes from that imbalance of power between partners, personal, or corporate.

Between the boundaries of Broken Barnet, however, the ties that bind are usually stretched tight as tight can be, and consent is neither sought, nor granted. When push comes to shove: off you go.

Who knows what happened in the case of Ms Maryellen Salter, sometime Monitoring Officer, now replaced by an 'interim' MO, although not replaced, we are told, until Thursday, 9th October, after the most almighty reaction to the events that led to that damning report, by Claer Lloyd-Jones, into the collapse of governance and legal services in this benighted borough.

Of course we like 'interim' consultants, here in Barnet.

We like them a lot, and we recruit them as often as possible, for our senior management posts, via the discreet offices of a third party - an agency, so as to confound the investigative zeal of the local blogosphere.

These interims and consultants blow into town, wafted on a cloud of mystery, landing at NLBP, staying as long as possible, on terms and conditions beyond the scope of public scrutiny, before moving on to pastures new - very often, it seems, to Haringey, to work for former Barnet CEO, Mr Nick Walkley, the real architect of One Barnet, the massive programme that outsourced most of our council services .

Walkley is of course also the man who oversaw the restructuring of the governance and legal services department here, with a post of Monitoring Officer newly defined, for some reason, with no requirement for any legal qualifications - which is how we ended up with an auditor instead of an experienced lawyer, with predictable and disastrous consequences.

Mrs Angry can guess what you are wondering: will Ms Salter end up in Haringey too ... or is it true she has just accepted a post as the events manager for a local micro-brewery?

We do know, however that our new Monitoring Officer, or rather the 'interim' MO, comes with an interesting CV: from Westminster Council, tripping with ease from one former Tory 'flagship' authority to another: both fine examples of Tory councils, of course, with many similarities.

A keen interest in social engineering, for example, from accusations of 'gerrymandering' in Westminster in the eighties, to the social cleansing housing 'regeneration' of Broken Barnet in 2014 -  and an enthusiasm from both Conservative run authorities for milking endless streams of revenue from hapless residents exhibiting the gross impertinence of trying to park their cars on the streets where they live, work, and shop.

Mrs Angry gets an awful lot of blog visits from Westminster City Council these days.

Hope you enjoy the new entente cordiale, between your authority and ours.

The entente between your authority and the Barnet blogosphere, we must warn you, will be strictly limited, on an interim basis, and may be less than cordiale, at times.

But here is a curious thing. About our new Monitoring Officer.

We are sharing the attentions of Mr Large with his current employers. Despite the claim made in a statement last week that the new MO had been seconded to Barnet, which rather implies that he is working exclusively for us.

Yes: despite all the criticisms levelled at Barnet by Claer Lloyd-Jones' report in regard to our shared legal services, we have now engaged a part time Monitoring Officer - and on a temporary basis only.

We find ourselves, in short, in the position of, say, an MP's wife who wakes up to find her husband in the papers for further extra-marital misbehaviour, having been told, following an unfortunate incident involving paisley pyjamas, that it will never happen again, darling.

I feel so betrayed, don't you, readers? And as always, yes, as always, the last to know.

Mrs Angry understands that, rather astonishingly, the appointment of Mr Large to his role in Barnet was not divulged to Labour group members in Westminster, until the day after the deal was agreed, and that the news only emerged through other sources, which, if true, would be a pretty extraordinary state of affairs, would it not?

It seems Westminster's MO has been helping Barnet, 'assisting' us, for a period of two weeks before an 'urgent' situation arose, ie on the 9th October, which suddenly required the immediate appointment of Mr Large to a formal, if rather limited, role in Barnet.

Oh. Why was it sudden? Did they not foresee the outcome of a report that delivered such a damning indictment of our legal services and governance? Or did they really not predict the level of censure and criticism that the report has provoked? Clearly, by sitting on the report and sneaking it into tomorrow night's committee, they had hoped to keep it quiet for as long as possible, but still ...

And then: it seems Westminster opposition members have been reassured that their Monitoring Officer's Saturday job in Barnet will not 'impact' his duties at Westminster City Council.

a. not exactly rushed off his feet at WCC, or:

b. has no intention of working up a sweat on our behalf, here in Broken Barnet.

What on earth is going on?

Does anyone actually know?

Questions that must be asked:

... there are tonight two council meetings during the course of which a restructuring of senior management will be discussed, supposedly to make savings, but actually creating more pointless and costly senior posts, with the usual self aggrandising job titles.

As Mr R suggests, there is a better case, now, for deleting the post of Chief Executive, and merging his functions with that of the Chief Operating Officer (sorry, Mr Naylor: without any unwarranted increase in salary). Will this happen? Probably not. But that is not to say that the current CEO is safe in his post.

Tomorrow night sees the Policy and Resources Committee to which Claer Lloyd-Jones' devastating report will be submitted.

So, yes: another interesting week ahead, in Broken Barnet ...
Posted by Mrs Angry at Monday, October 13, 2014

Great so now we have Mr Large , giving it very Little , in Barnet . Only one good thing about this , you can invite him to join the Bloggers Team :) But it Does really give a clear indication of how far things have Got out of control Very Very Quickly . Councillors please please please , Can we have a Resident Opt Out scheme . Because This Borough is Going to Go Bankrupt sooner than you think PS , I Recieved a Letter from Our Finchley MP mike Freer . Worning about a council Tax rise , should Labour Get in . The so called mansion Tax . What he failed to mention was your council tax , will more than Double ( without ) receiving any real service . Just to pay off Debt . On Bankruptcy . !!

Yes, you are right, Anon: he has the right sort of name to join the Barnet blogosphere: however, Mr Large should not get his hopes up, as I suspect his CV is not quite what we are looking for, and anyway there are no part-time, interim, temporary vacancies at the moment.

Mike Freer doesn't worry about stuff that affects 99% of residents, does he? Only the privileged few who live in large houses, in the leafy avenues of HGSuburb, and are racked with anxiety over having to cough up a bit more money to pay for the NHS etc.

Funny how Tories hate tax on principle, except in the case of bedroom tax, which is a burden on the poor and vulnerable, so can be discounted.

Yes mrs.A , it amazes me that the con dem coalition call things Like Bedroom tax & cuts to Housing Benifits as savings , But anything to do with the rich is Tax ! Now Let's look at what the savings (TAX) from the poor is going . The con dems are Going to take 100billion & from Us & give it to the Bankers . How many jobs could we create with that kind of money ?

So since August, when Cornelius and co. have seen the initial report, they made no efforts to find a permanent MOOO replacement.

For light relief the provisions of Clause 8.4 of the main Capita contract stand as a stark reminder of the Tory policy of "do as I say, don't do as I do".

Quintus - Clause 8.4? Obviously I did learn the entire contract off by heart, as it is now the required catechism of all residents of Capitaville, but ... I seem to hav forgotten which bit that is ...

Yes, Anon: exactly so. And it would seem no effort was made until the day Ms Salter left, which we are told was last Thursday, although she appears to have been on leave for some time before that ... Very odd, isn't it?

This requires Crapita to have a full suite of qualified and competent lawyers in place... A shame that the Tories didn't see fit to ensure that the Council had similar capability.