For Ed Vaizey - The (Library) Caretaker: A play in praise of cutting libraries. 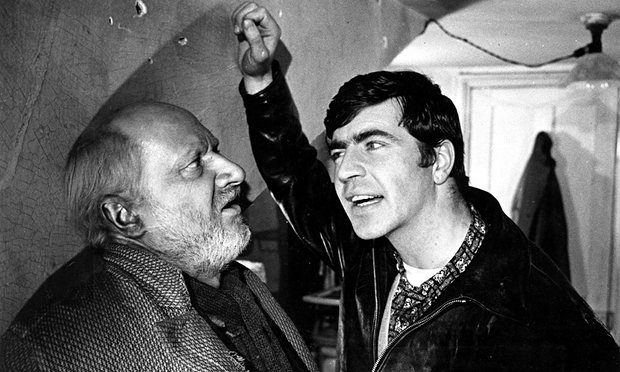 For Ed Vaizey, the former Tory minister in charge of libraries - who did for the public library service what Jeremy Hunt is doing to the NHS, & has complained in the Telegraph about the lack of plays written in praise of right wing policies:

“There were very few radical ideas put to me when I was a minister. I was only ever asked for more money.

“The view seemed to be a simple one: no museum or library must ever close, no performing arts organisations must ever be shut down – if it was funded once, it must be funded forever. All must stay the same.”

'Let’s not beat about the bush: the arts are relentlessly left wing,” he said. “Anyone rightwing probably works at Christie’s.

As Munira Murza [the former London]mayor’s head of culture] once said: there is no pro-fox hunting play. Indeed, there are no plays about over-powerful trade unions letting down their members.

As a Remainer, there is no pro-Brexit play attacking unaccountable Brussel’s bureaucrats building a European superstate. There’s no play exposing the corruption and abuse in a country like Venezuela – why not'?

Or a play in defence of library closures: why not ...?

Act One, Scene One:

A public library in the London Borough of Broken Dreams.

There is an air of great depression, and decline, due to years of deliberate underfunding, and an attempt to run the service down to the point where cuts may be made, in the guise of delivering 'improvements'.

Two men are locked in the unstaffed library overnight, due to another IT crash at Crapita HQ, and a catastrophic failure of the electronic self service automatic doors.

Davies, a former library caretaker, now unemployed, and down on his luck; and Mick, a man from Crapita, in a lovely suit, come to measure up for more library 'reshaping'.

Mick: How long has it been? How long?

Davies: It's not so bad. At least we're in the warm. That's why I used to come here. For company, and somewhere warm to go. Not the same now, of course.

It is warm. It will be, until the heating goes off. And then the light ... And then we will be alone, alone in the cold ... and in the dark.

Mick: This is an outrage.

Davies: No toilet, either. They lock them up.

Mick: What do you mean, no toilet?

Davies: They lock them up.

Mick: Who? The librarians?

Davies: There are no librarians.

Davies: The staff? There is no staff, mate ... You sacked them all. Told em to fuck off down to the job centre.

Mick: I really, really need to use the toilet.

Davies: There is a waste paper bin. Use that. I won't look.

Davies: Why not? They made the protestors do that, when they occupied the People's Library, in Friern Barnet. 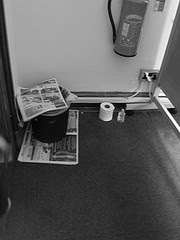 Mick: The CCTV operator. In Swansea.

Davies: Bank holiday weekend. No cover. We are alone. You are alone: with me. All weekend. Let's get to know each other. We can be friends.

Mick: Surely you can open the doors? Where is your library ticket?

Mick: I don't have one. I came in with someone else, when the doors opened. They've gone back to the office. With my phone.

Davies: Where's that? Your office?

Davies: I don't have a mobile phone. Can't use a pc. Digitally excluded, see? Like you, now.

Two days later: Mick is lying on the floor, crying, clutching an old toffee he found stuck to the carpet. Davies is sitting in the corner, reading a book on outsourcing. Mick has lost command of his senses.

Mick: And when I get out, I am going to reshape this fucking library like no one has ever re-shaped a library before. No books. No people. Office space ... With teal-blue, copper and parchment linoleum squares, a table in afromosia teak veneer; an armchair in oatmeal tweed, and a beech frame settee with a woven grass seat ... It wouldn't be an office: it would be a palace ...

Davies: If only you could get down to Sidcup ...

Davies: Best not to do that when you're at risk of being stuck inside one.

Davies: And without papers? Yes, my friend. This is Broken Barnet, didn't you know? There is no way out.

Davies: Not really. You and I are characters in a spoof Pinter play, by Mrs Angry.

Mick: How did that happen?

Davies: Fuck knows. Something about writing a right wing play in praise of library cuts, for Ed Vaizey. I think I detect the influence of Bertolt Brecht, however, which would negate the entire exercise, and bring its artistic integrity into question. 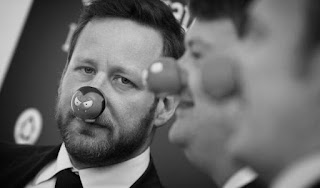 Mick: Is the woman mad?

Davies: Some would say so. Gone a bit wrong, anyway, hasn't it? Lost control of the narrative.

Davies: For what, exactly?

Mick: For pretending we need library cuts, and taking over the library buildings, and giving ourselves a gainshare payment for doing it: for banning the children, and sacking the staff, and throwing out books, and people, and putting cctv cameras in place of librarians, and ... everything ...

The lights come on.

Mick runs out into the darkness, in the direction of Sidcup.

Davies remains in his chair, staring at the blank screen of the CCTV camera. 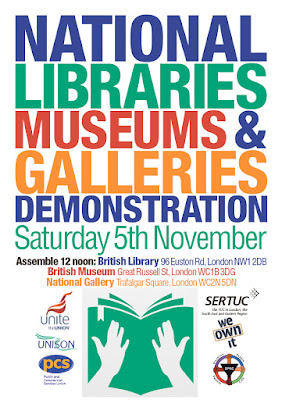 Sorry, my favourite line-to-die-for is:

Mick: Is the woman mad?

Sinfully funny take on a tragically true state of events.

I can't help it. I was driven over the edge, a long time ago: and there is no going back now.