The Teardrop Explodes: the new Hendon library that is, and is not 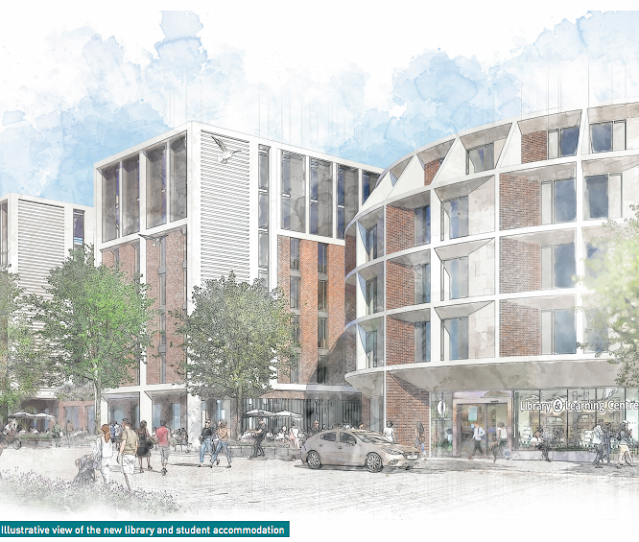 Above right: the new 'library' design, which has not been designed.

Well then. A short update to the previous post on the Hendon Library fiasco.

As you know, the Broken Barnet web of  informers spreads far and wide across the borough. And so we learn, via this network, of the experience of one resident attempting to contact the Hendon Hub consultation, in order to ask some very reasonable questions about the size of the fantasy new library alleged to be our Tory councillors' 'offer' in replacement for the listed, former flagship library next to the Town Hall. Which we know now they want to knock down.

We know now, from the careful investigation of local residents and campaigners, that not only do the plotters intend to try to demolish all but the facade of Hendon Library, but that rather than, as we thought, replace this with a purpose built 'state of the art' new library on the old council car park, it will merely consist of something shoved in the bottom of a block of student accommodation, on this site.

As you will have seen in the previous post, there are remarkably detailed, albeit carefully presented, illustrations of what the new buildings in the Burroughs would look like, if the plotters get their way, and there are images of the new student block which apparently will host a library on the ground floor. It is perfectly obvious that this new block is not huge, and is largely a rounded building, with restricted space. How much space? Doesn't say. 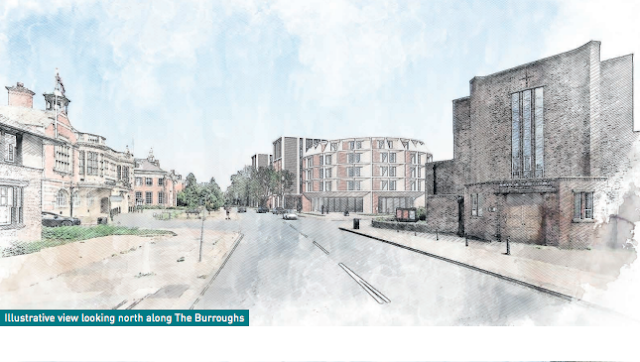 One curious resident, let's call her Mrs X, rang the Hub phoneline. No response. Ansaphone. Left a message asking someone to call her back with more information about the new library. Someone did call her back later that day to say - person didn't know anything much about it, but would ask. Oh. About this new building then ... Was it a completely round building? She was told no, it was in fact a 'teardrop' shape. Ah.

Rang back next day and told Mrs X that sadly, she couldn't give her 'any numbers', because everything was 'too early 'in the planning stages, and the architect didn't know, and of course it all depended on what people wanted to see in the library. It wouldn't be smaller than what we had (how could it be?).

So what is the measurement of the site? Surely that gives some indication of the size of the footprint of the new library, or at least the new building?

Mmm. Will have to go and ask about that.

What about the size of the so called 'temporary' library? You've got a floor plan of that on the Hub Information Boards, after all, so you must have some idea of how big that is?

Will have to go and ask about that too. 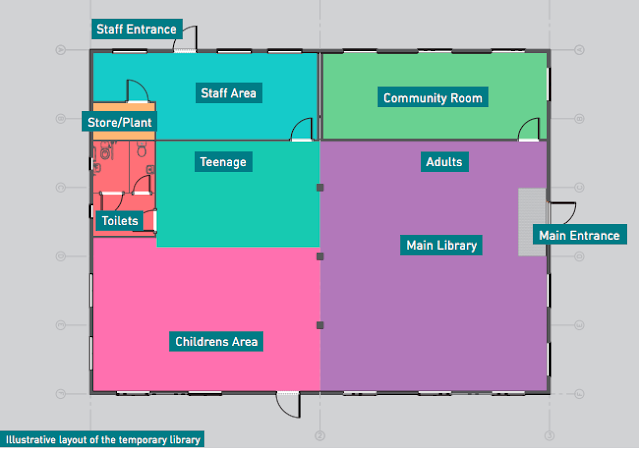 The 'temporary' Portacabin library, designed, but not designed, and its size a mystery. The toilet bowls give some sense of the small scale, mind you ... the 'community room', & staff area, will seemingly be only three & a half times the size of the loos.

And, you know, pointed out Mrs X, you can't really run a consultation with residents on the basis of not providing basic information like the size of the library you say we can have. How can we be properly consulted if we don't know what is realistically achievable, in what seems to be an  awfully small space for a library, a community space, areas for study and areas for new functions that you say might go in - as well as the Local Studies Centre and specialist storage space for archival material?

The Helpline person said that more information, including size, would be released in the next round of ... information release. Oh. When? Mid May. After the elections, you mean? Yes.

Aha! You may be told how big your tiny new library will be, readers, but not until this explosive information won't upset the Tory voters, (well: too late for that ...) and equally significantly, only days before the consultations end ...

So: the architect has designed but not designed a building which may or may not fit the space intended for it, which is an awful gamble, isn't it? Still, as Tory library Chair Cllr Reuben Thompstone says here, "The Hendon Hub project is a fantastic opportunity to improve our offer to Hendon residents ..." Our offer.

Fantastic. In its truest sense.

The architect has not designed the new building they claim will accommodate the new library, and the design that does not exist, suitably, as we see below, is in the shape of a teardrop. Got that?

A representation of the grief of the people of Hendon, for their lost, listed library, and the memory of their built heritage? Or is it, Councillor Thompstone, the teardrop slowly running down the cheek of Eileen Colwell, watched by new  generations of children robbed by the Tory councillors of Broken Barnet of their right to a comprehensive and efficient library service, as guaranteed by the Public Libraries and Museums Act, 1964? 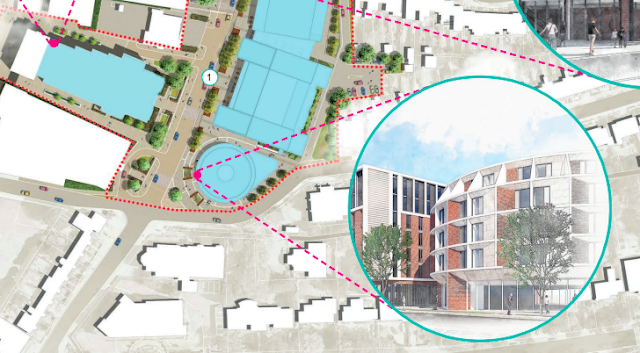 When two teardrops collide: here we see the small size of the new library that is, and is not.

The new building may or may not accommodate all the lovely things they are encouraging us to believe might be put there, if only they get planning permission. Similarly to the fantasy library which still stands, invisible to all but true believers, in the cursed landscape of North Finchley, it is a library, but not a library: it both exists, and does not exist. It is Schrodinger's Library, an eternal paradox, left dead and alive in a sealed box made by mad scientists in the Barnet Capita Laboratory of Broken Dreams.

In other words: this is not just any sort of consultation, readers, but a Barnet Tory consultation: a Nonsultation. Verging towards an Insultation.

Nevertheless: more than a thousand people have already signed the petition organised by residents determined to stop the demolition of the listed Hendon Library. If you haven't already done so, please sign here.