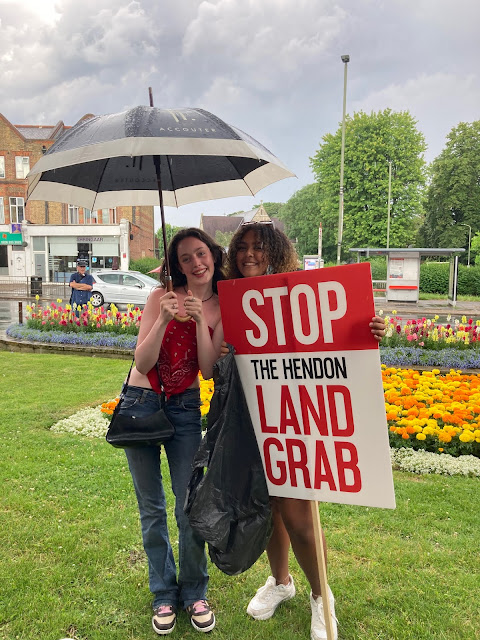 Undefeated by the storm, local residents protested against the Hendon Hub plans
On the 20th of July there was a Policy and Resources committee meeting at Hendon Town Hall, at which the highly controversial plans for the Hendon Hub development were due to be discussed by councillors.
A huge crowd of residents campaigning against the plans gathered outside before the meeting.
As they did so, the sky darkened, and thunder began to growl menacingly overhead, quickly followed by a downfall of heavy rain.
It made no difference to the mood of the residents, or rather seem to galvanise their resolution: the British response to adversity tending as usual to obstinate refusal to accept being beaten.
In this case, with most of the protestors being formerly non political, and inexperienced in attending demonstrations, there was an added sense of rebellion, and even jubilation. They were determined to show their elected representatives, skulking in the committee room upstairs, how strongly they felt about these monstrous plans to foist what will effectively be a campus colonisation of not just a residential neighbourhood, but the historic heart of Hendon, comprising not one but two Conservation Areas.
Such a large protest had not been seen outside the Town Hall for a very long time, even pre-Covid.
Fellow blogger Mr Reasonable and I stood outside, astonished at the scale of the turn out, and the impressive organisation of the Residents' Group, led by Professor Brad Blitz, and Gabbie Asher. 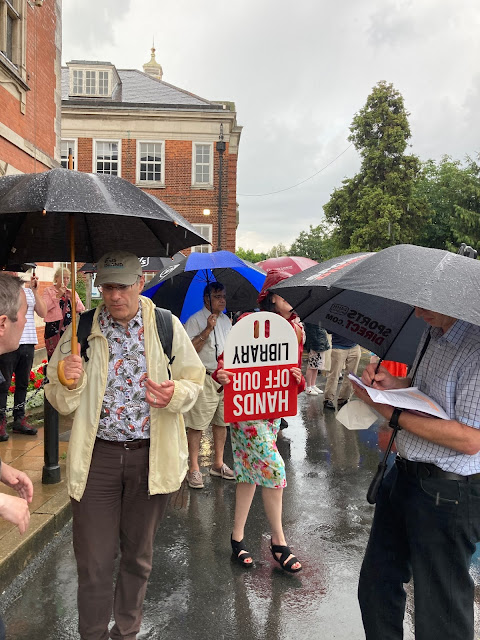 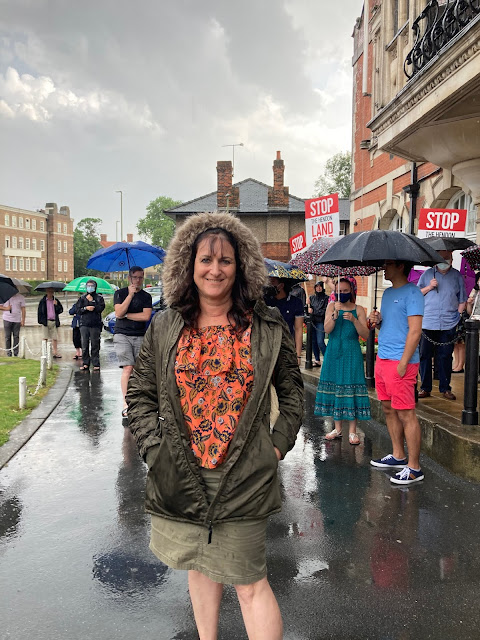 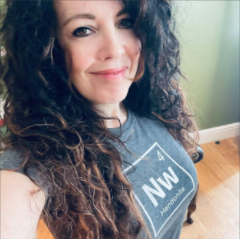 Hendon campaigners been there, seen that - and produced some T shirts: now you can help by donating to the legal challenge fund here. Above, Gabbie Asher
Now here in Finchley there is a rather puzzling new nonsultation on the question of whether residents like me would like to see a new 'public square' in our high street. Doesn't that sound lovely? Let's have a look at the plans. You know, the details, the small print etc ... oh: is that a whiff of sulphur?
Now where in Finchley, you might ask, could we have a public square, and what would we use it for? Protests against an oppressive authority, perhaps? Think Place de la Concorde, or Tiananmen Square, or even Trafalgar Square, poll tax riots, etc.
No. 'To create an inclusive space'. Ah.
Healthy and green. Ok ... quite a challenge, in that location ...
And of course with 'a regular market offer'. Marvellous. An inclusive space. Market 'offer'. Sounds good.
Except that the place that Capita and chums are thinking of is outside Tesco, and maybe across the road from Tesco. Well yes, with the ceaseless, toxic traffic of Ballards Lane running through it: displacing the shelter 'offer' depended on by Finchley's desperate homeless citizens, and the pigeon feeding station, and the fag break area used by employees at the offices above Tesco and oh: hang on.
The offices above Tesco ... remember that presentation that Capita officers were obliged to make, a couple of summers ago, for Finchley residents, at which there were helpful lists of the 'development opportunities' they had identified in our area, swiftly whisked away and never seen again? To my astonishment, yes, hidden in the detail, had been a proposal to build on and around Tescos, more unaffordable housing. 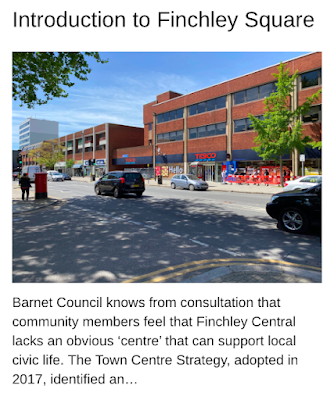 Bla bla bla: a photo taken of an uncharacteristically quiet Ballards Lane shows the location proposed for an alleged 'town square' ... with a busy road in the middle, surrounded by all the new development they forgot to mention ...
And hidden in the latest nonsultation is a clue as to how they will pay for the unasked for act of generosity in providing a supposed  'town square' that will be nothing of the sort. In fact it is so well hidden, I can't find it again. Suffice it to say that the 'infill' development of Finchley is the price you will be expected to pay for this nonsense. Who knew?
Me.
Well: ok. Infill my neighbourhood, regardless of Conservation areas, or local history, or listed buildings, or the hard won character of our suburbs. Build on my community open space. Sell off part of my park and shove up a block of flats.  Ignore the real housing needs of residents, especially those who are disadvantaged, or social tenants: ship them off to Peterborough. Throw bucketloads of my council tax at Capita, while you do it.
Problem is that you can allow a privatised planning service to push the destruction of our built heritage only just so far.
There is a tipping point, which we have now reached, and passed, where the political impact of such policy begins to turn voters that Barnet Tories need to stay in power against them.
The uprising over the Hendon Hub folly is the most obvious example of this: as we have seen, previously loyal Tory voters have had enough, and are not taking it any more.
In Barnet the truly awful Gas Works proposals are having the same effect, even though they are in the less Tory loyalist part of the constituency. Fortunately fellow blogger Mr Reasonable has been helping the residents' campaign to fight the latest, awful plans, in which the few social tenants will be shoved next to the railway track with windows that won't open, and obliged to pay for air conditioning for their overheated rooms.
More information here: there is still time to object to this awful development: it's not that people think there should be no housing built here, it is a question of the density of the units proposed, which will unload a huge extra burden on the local schools and health care services - and the low standard of design, tiny apartments to maximise profit.
In Edgware, another mass development is planned (and will surround the neglected, listed Railway Hotel, recently having suffered the third fire in six years).
In North Finchley Capita are pushing yet another faux regeneration, backed by Barnet Tory leader, Dan Thomas, seen in a rare appearance here, in which they are plotting to flog off the 'refurbished' shrunken library, the Arts Depot, and two car parks to a developer, Regal London.
Yes, getting rid of another library, after spending £14 million on cutting the service to shreds, under the guise of 'refurbishment'. It was always about this, biding time before they could point to carefully engineered declining use, directly the consequence of devaluing and undermining the library service, so they could flog off the sites. 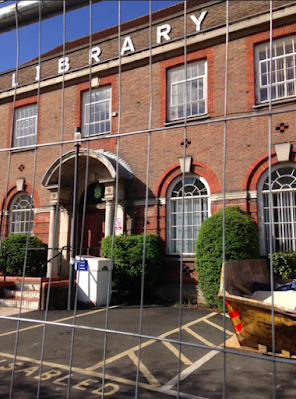 North Finchley Library, 'refurbished' at vast public expense in 2017 - in fact robbed of its children's library - now to be flogged off by Barnet Tories

Does it serve the best interests of residents and taxpayers, to sell off such community assets? Or is this all so as to increase the fees for Capita, and the profits of private developers? Yes.
Does it meet local housing need? No.
Recently a poll revealed that both Hendon and Chipping Barnet constituencies are at risk of being won by Labour. Finchley's fate hangs in the balance too, if and when the boundaries are redrawn. The sky is darkening: the inevitable storm moves ever closer.
Barnet Tories have a chance now: call a stop to the pillaging of our borough by Capita and developers, and return to the people whose interests they are meant to represent the power to decide how their communities will be managed ... or continue on the road to perdition, and the end of their feckless administration, brought about entirely by their own hands. They won't, unless the faction that is pro development, to the point of weakening their own hold on power, is overcome by the few senior Tories who have more sense.
Relatively speaking, of course.
Watch this space. 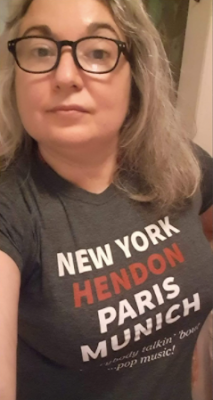 The ever witty and prescient Mrs. Angry takes down Barnet Council, once again!