Brian Coleman at the Standards Committee: part one 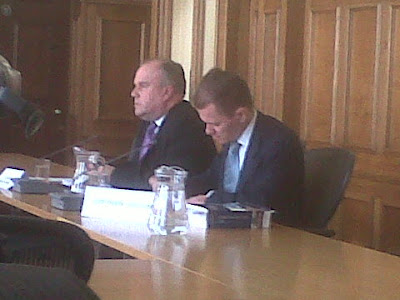 Coleman listens to the verdict of the committee


The hearing began with introductions from all the people sat around the committee table: the Chair, Deborah Sanders and her fellow independent member the Reverend Bernd Koschland, committee member Labour councillor Claire Farrier, two governance officers, and the investigator, Keith Stevens. The respondant's solicitor, Stephen Hocking, introduced himself, but when it came to the respondant, he declined to do so. 'I think,' said Brian Coleman,' That everyone knows who I am ...'

And here is the problem, of course: Brian Coleman is so convinced of his own mythological status and the infinite, limitless sphere of his influence, that he really does believe that everyone really does know who he is, and that he is the centre of the entire universe, knows better than anyone else about any subject under the sun, and that his opinion on any issue is the only one that matters, whether it is the question of removing bollards in Ballards Lane, informing a constituent that seventy years ago she would have been a blackshirt, or telling an Israeli born Jew that he is an anti Zionist and therefore an anti-semite. The latter two accusations, of course, being why we were all sitting in a Standards hearing, waiting for the committee to consider the complaints made against him by the individuals concerned.

Sitting in the public gallery were one of the complainants, Ron Cohen, a couple of bloggers, some local press, and a posse of Coleman staff members, including the agent for the Camden Conservative party who was, Mrs Angry noted with amusement, reading her tweets inches in front of her. Sadly, no Tory colleagues came to offer their support. Also at the hearing was Brian's mum, his assistant and a couple of other hangers on. More significantly, of course, was the small group of protestors who had, despite assurances from elsewhere, turned up with placards and posed outside the Town Hall because they had been 'requested' to show 'support' for Brian Coleman. 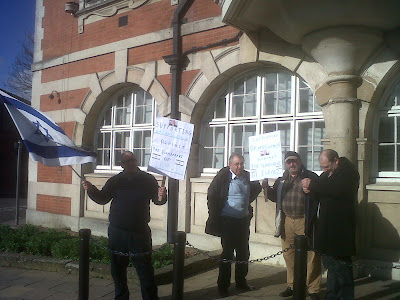 These protestors belong to a controversial group led by a man called Jonathan Hoffman, who regularly demonstrates at public meetings and has extreme views on what he considers to be anti Zionism and anti semitism. Mrs Angry went outside before the meeting to take the photo above, and read the placards which maintained that they were objecting to the slandering of Israel. Mrs Angry pointed out that in fact the complainants at the hearing were being slandered by parties who were calling them anti semites, when the statements in the report makes it absolutely clear that they are neither anti Zionist nor anti semitic. But of course hardly any of the few people who have, as requested, shown any support for Coleman in this matter appear to have read the entire report.

At the first recess, which came early in the proceedings, this group, the leader of which is clearly on familiar terms with Brian Coleman, who spoke to him as he passed by, began a discussion with other members of Coleman's group, in the public seating area, in which one of them made declared loudly: 'One of the complainants is a racist'. Mrs Angry lost her cool, and asked them to go outside into the corridor if they were going to continue to make offensive remarks. With no sense of irony, they protested about the right to freedom of expression. One of the Hoffman gang then accused Mrs Angry of, amongst other things 'advocating the murder of homosexuals', for some inexplicable reason. Mrs Angry objected to this ridiculous and again slanderous statement, and pointed out that the speaker had no knowledge of her views on anything at all: but it was clear that these demonstrators are largely incapable of a rational approach to any discussion.

During a later break, however, to his great credit, Barnet Eye blogger Roger Tichborne, who has more patience and diplomacy than Mrs Angry, engaged Mr Hoffman in a sensible fifteen minute discussion, pointing out that the hearing was not actually about Israel, or anti semitism, and that in his view his group had been duped into misinterpreting the reasons for the hearing. The group left, and, significantly perhaps, did not return.

The first part of the hearing began with an address by Brian Coleman's solicitor. He perhaps should have thought twice about his opening gambit, which was guaranteed to annoy the committee: he objected to the presence of Councillor Claire Farrier, claiming that she was 'biased' and started wittering on about Andrew Dismore, Coleman's Labour rival in the GLA elections, who was desperate to take what I think he described, rather comically, as 'the second biggest political scalp in London'. Mrs Angry laughed. Second biggest head, maybe, if not the biggest, but not sure about the scalp. She tried to imagine a bespectacled Andrew Dismore as an Apache warrior, axe swinging, leaning gleefully down from his saddle. No. Doesn't work, Mr Hocking, sorry.

Brian's brief then tried to raise objections to the fact that the complainants would not be called and cross examined.

The senior governance officer present, Margaret Martinus, pointed out that at the pre meeting hearing, no witnesses had been put forward. The investigator commented that he had never been to a hearing where cross examination had been allowed. As to the matter of the allegation of 'bias' by Councillor Farrier, Ms Martinus informed the hearing that the rule was that a fair minded observer would not think that there was a danger of bias.

Members of all three parties take part in Standards committee procedures, and act according to the regulations appropriate to the circumstances, and the question of bias might be made of any council committee - especially in Broken Barnet. In Broken Barnet, the risk of bias is sanctioned only when in favour of the Tory group, of course, because this is not bias, but the correct way of thinking.

Coleman's solicitor continued his appeal be able to cross examine witnesses. In a solicitor type of faux rage he expressed himself to be 'astonished', that it was 'inconceivable' that this was not going to be allowed. He had prepared questions for them, to discover the the purpose behind the emails, and to establish 'the mental state of the complainant'. Mrs Angry wondered if anyone would be allowed to establish the same facts in respect of the respondant. Difficult, clearly.

At this point the Chair decided she had heard enough. She repeated that the committee had not been advised prior to this belated request. Ms Martinus also stated that the respondant had not raised these issues beforehand when invited to do so. And then a recess was taken to consider these points.

Labels: bias, everyone knows who I am, racism, slander, the biggest head

I have had the pleasure of witnessing a county court judge tell the other side's barrister who had expressed some surprise at something or other "It depends upon your capacity for suprise". Evidently Mr Hocking must have a low threshold for "astonishment".

How can anyone who spends lots of time in Brian's company ever be surprised?

Anonymous, thanks for the link: this blog by Hoffman gives you a good idea of how he thinks, and the trouble such misinterpretation causes.

Mrs Angry, the pro Coleman protestors had come because they believed Brian Coleman was being attacked by homophobic, anti semites. I would like to think that if this really was the issue I'd be on their side, even for someone like Brian Coleman. I suspect that the conversation with me and (for once much credit to him) Dan Hope, painted a far more balanced picture.

I suspect having read Jonathan Hoffmans blog, that he is a tad embarrassed by the whole thing and this is a display of Chutzpah. It is all a bit sad really

I think that most of the trouble in this world is caused by people who take extreme positions on any given issue, without looking at the evidence, then wonder afterwards at the conflict that ensues. These people are sometimes naive, and easily manipulated by more cynical forces, but they have the potential to cause great harm. They do not seem to have considered the real damage that has been caused to two people who have been grossly misrepresented by the allegations in this case. Both individuals in the statements make it quite clear that they support Israel: to criticise one aspect of government policy is not to be 'disloyal' to be able to express such views is a necessary part of any democracy.