A Tale of Two Barnet Libraries 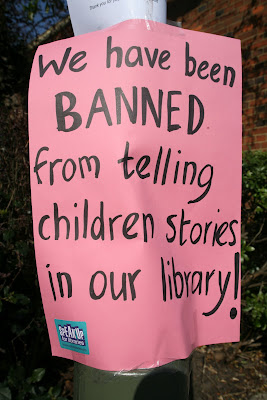 Last Saturday afternoon a group of residents came to Friern Barnet library to take part in an event they hoped would mark their support for a much loved local resource - one that is due to be closed, in a matter of days, despite a strenuous campaign of opposition by the community.

The date, the 24th March, was significant because it marks the anniversary of the library's opening, 78 years earlier, built according to a design by Metroland architect A T Curtis. A third of the funding for the library, interestingly enough, came from the Carnegie Trust.

Unfortunately it was made clear to the residents that their planned activities would not be allowed in the library and they duly moved the event outside where these photos were taken. (Thanks to Brian Watson for the pics). 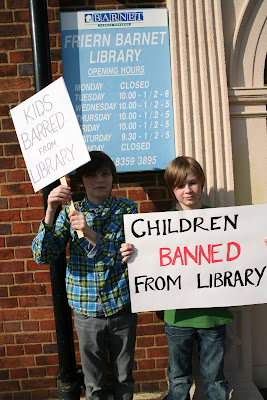 The campaigners had planned - amongst other events - story telling for the children, and a puppet show, and to deliver a letter of thanks to the councillors who had voted at a recent scrutiny committee to delay the closure of the library, until such time as the promised alternative services are available at the North Finchley Arts Depot.

On 4th April the issue is referred back to Cabinet. The likeliness of any change of policy from Councillor Robert Rams and his Tory colleagues,however, is remote.

Campaigners for Friern Barnet Library had put forward a proposal to run a community library, in the original building, run by volunteers.

This proposal was rejected, after a year of campaigning by highly committed members of a local group, (see above) on various spurious grounds, including the inability to provide any further funding. The reasons given are irrelevant, in fact, because of course the intention has always been to close the library so as to free the building and grounds for sale and development. 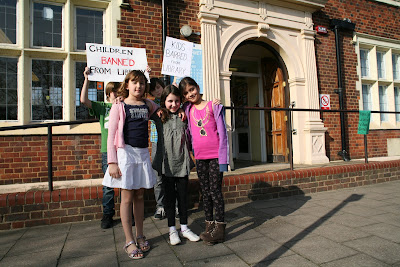 Mrs Angry does not really agree with the principle of community libraries because, in her view, a library should be run on a professional basis, with trained members of staff and a properly resourced network of support. There is a real danger in allowing well meaning volunteers to undertake a committment to such services, not least the danger of exploitation by unscrupulous local authorities who refuse to acknowledge their duty to support funding for arts, heritage and leisure activities. That said, it is entirely understandable that residents would try to preserve a vital local service, and it might be thought to be an enterprise that a Big Society Tory council might want to encourage.

But not in Broken Barnet, of course.

Oh: unless the community in question is in a Tory ward, and happens to be represented by a highly influential residents organisation with plenty of funding and other useful resources at its disposal, courtesy of its enormously wealthy members. Yes, I'm talking about Hampstead Garden Suburb - see earlier blog for more details.

Their toytown library in a shop has been saved, and subsidised by the council who are happy to promise continued funding - yes, funding denied to the Friern Barnet schem - and all necessary support until at least 2016, or as long as the volunteer suburbanistas do not get bored with playing librarians. Still, if they do, their local Tory councillors - John Marshall, Andrew Harper and Daniel Seal were reported to be keen to take their turn behind the counter. Mrs Angry can imagine Cllr Marshall might enjoy playing librarians with the ladies of Hampstead Garden Suburb, and of course Councillor Harper is bound to be keen to be hands on, if the opportunity should arise.

There are deep, dark rumblings from the Suburb, however. According to reports in last week's Ham & High:
"This verbal agreement was made at a meeting on February 6, but the council has still not sent the group the paperwork to finalise it.A notice on the library door says the library is due to close on March 31.The community group had hoped for a “seamless” transition starting on April 1 but is now experiencing a “frustrating log-jam”.“The delay has been frustrating but we received a possible April timetable today,” said Mr Seres on Tuesday.“If it can be firmed up before the weekend, with one key point confirmed, we will be able to meet it.“If the delay continues for six weeks and there is no library during that time I’ll be spitting blood." 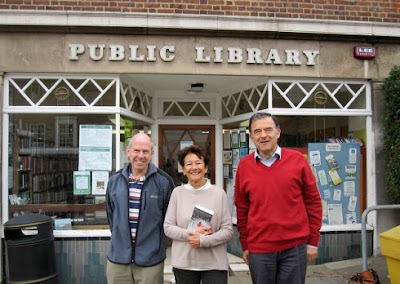 Dear me. This will never do. A frustrating log-jam is not what the residents of Hampstead Garden Suburb expect. The volunteer magistrates, teachers, etc will be on the phone to their councillors, we may imagine, giving them what for. Of course the frustrating log-jam will no doubt be caused by those annoying little practicalities such as er, CRB checks, security arrangements, timetabling, insurance, stock ordering, ... all those trivial matters that a properly run library does as part of its duties. But hey ho, let them get on with it.

Think about Friern Barnet again: the funding from the Carnegie Trust which made it possible to open the library in 1934. Think about the ideals which informed the foundation and administration of Carnegie's charitable foundations. The Trust was founded in 1913 for the 'improvement of the well being of the masses of the people of Great Britain and Ireland'. In the 1930s, in the midst of recession and terrible hardship for working people, it endeavoured to support social welfare projects to help tackle poverty, unemployment and the need for urban renewal.

Eighty years later, we are in the midst of another deep recession, and the residents in the less privileged areas of our borough are no less deserving of help to retain the resources they need to sustain their community life. The double standards shown in the favouring of the Garden Suburb library scheme at the expense of the Friern Barnet plan shows more clearly than ever the black hearted hypocrisy of our Tory council: they act only according to the benefit of their own electoral advantage, and carefully calculate their policy proposals accordingly.

Except that in Barnet, any assault on the library service is a risky move: it is one of those dangerous issues which has fairly predictable results. The middle class voters of Barnet do not like their libraries messed with, in any part of the borough, and Mrs Angry predicts that this issue will come back to haunt the Tory councillors at the next election. Combined with the fury that parking, park hire, allowance rises, oh and the mass sell off of our council services will have caused by then - well, this all might prove to be something of a mistake. A big mistake. 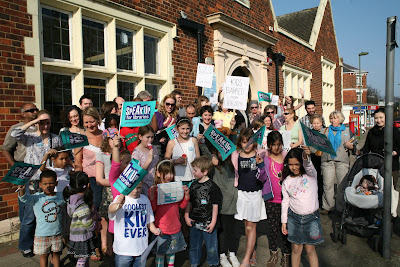 Never mind. As we know, Councillor Rams has announced that he is creating new libraries, with longer hours, and even though these are invisible, we understand that an opening ceremony will be taking place in one of them on Sunday morning, to be attended by Rams, and his equally invisible colleague Councillor Brian Coleman.

Have a nice weekend.

In case they have not won by mid-summer, I hope the Friern Barnet Library campaign people organise a "book stall" at Brian Coleman and the Rev's "Friern Barnet Summer Show", in Friary Park.

No doubt Brian is currently negotiating a suitably low fee for the use of Friary Park, unlike the higher fee for similar events in other parks in the borough.

oh dear, baarnett, I would imagine that such a bookstall would be subject to the same treatment as the Barnet Alliance's stall last year ... provoking a display of muscular Christianity from the Rev & a forcible confiscation of any unorthodox literature.

I think the Friary Show should be subsidised, and it is quite right that there should be a VIP tent for Brian and his Tory chums, with champagne and an endless supply of cheesy wotsits. As someone remarked last year, better to have the old fool in the tent pissing out etc.

Oh, of course, this summer, post GLA election, if things go a bit Pete Tong, he might not still be Cab Mem for environment.