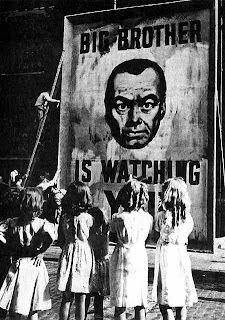 MetPro has left the building.
Or so we understand.
Yes, the curse of Mrs Angry strikes again: MetPro Rapid Response: RIP. MetPro Emergency Response: RIP? As far as Barnet is concerned, anyway, it seems: at last. Rumour has it that after yesterday's story in the Ham & High, panicking senior officers at NLBP were running around like exciteable little girls and scaring themselves with their own shadows. Ooh, er: what to do?
If it is true that only after this press story was published were our blackshirted friends shown the front door, then that tells you something about the One Barnet approach - only when bad publicity ensues does our council worry about using a company like this ...
Mr MetPro, Kevin Sharkey, spoke to journalist David Hencke (by the way, he is a well known parliamentary correspondent, ex Guardian, (wonderful paper) and investigative reporter, not, as reported in the Ham & High, a Barnet blogger, (obviously he still aspires to such an accolade, and Mrs Angry has offered help him out, and give him a few useful suggestions, once she has returned from her honeymoon).
http://davidhencke.wordpress.com/2011/04/01/we-filmed-bloggers-and-barnet-residents-for-tory-council-private-security-chief/
According to this post: "He said the main reason why people could not watch the meeting was because they had arrived late and said that he knew people who were there were up to 'tricks' to get other people into the chamber which would have breached fire regulations ... We know what tricks people got up to like saying they were going to the toilet to free a place and then coming back.”
I was present at this meeting and would like to remind Mr Sharkey that in fact the only tricks she is aware of are the covert use of filming ordinary residents without their knowledge, or consent. The public gallery, despite being half empty, and despite the approval of the presiding police officer, was barred to at least seventeen residents who had been kept under virtual detention in the overflow room - where at least one woman has reported even having to ask permission to visit the loo.
Mr Sharkey claims he was acting entirely with authorisation by Barnet Council, including, it seems, the secret filming of me, other bloggers and members of the public. Oh, but hold on, a Barnet statement says: 'At no point has the council ever authorised security staff carrying lapel cameras.' Oh dear: someone seems to be rather confused, don't they?
And hello: Mrs Angry's FOI questions about how and when the MetPro contract was granted have been ignored by Barnet Council, in breach of the Freedom of Information Act: the twenty day maximum period has been flouted, and she is therefore going to make a formal complaint to the Information Commissioner about the deliberate withholding of information that is clearly in the public interest. What have they got to hide, do you think, citizens of Broken Barnet?
Why does this story matter so much?
It's not just about what happened at the now infamous council meeting, the issues of civil liberties, human rights, data protection, invasion of privacy, the shameless use of an unaccountable bunch of bouncers to prevent access to the democratic process. It's about those funny old concepts that are just so hard for the lunatic Tory councillors of Barnet to understand: accountabilty, transparency, scrutiny. It's about Contract City: about what happens when council services are tendereded out to private companies - whether this is social care, lighting, or council security, or any of the many functions that our idiotic Futureshaped Tories think they can dispose of - we need to know that our council is capable of granting these contracts and monitoring them in an open, transparent and responsible manner. You might be forgiven for concluding that the record, so far, is pretty appalling.
Posted by Mrs Angry at Friday, April 01, 2011

Mrs Angry, I too submitted a FOI request concerning Metpro. Like you Barnet Council has failed to respond within the statutory deadline. The questions are straightforward yet Barnet seem unwilling to respond. I can only draw the conclusion that Barnet council believe themselves to be above the law. I think that is a presumption that needs to be challenged.

I can only apologise,DCMD: I'm tired, I'm stressed, I am losing the ability to spell: what can I say?