Brian, Adrian and Rowan: fans of Thatcher's, but Banner Snatchers? 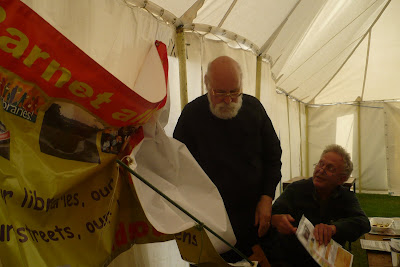 The Strange Tale of a Tory councillor 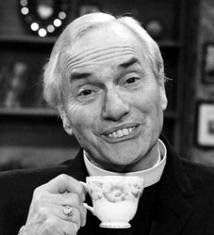 And a police investigation that never happened:

I wol nat tellen eek how that they goon
Hoom til Atthenes, whan the pley is doon,
But shortly to the point thanne wol I wende,
And maken of my longe tale an ende.


Hmm. Well today is Mrs Angry's birthday, (you didn't send a card, did you?) and despite the gloom of contemplating her advanced age and failing faculties - sight, hearing, sanity - she is feeling full of the milk of human kindness, and some champagne, and some cake, so she is inclined not to write about anything horrible, or mean, or shameful.

She will not, therefore, make any reference whatsoever to, say, oh, let's see - the outrageous story of the stolen banner of the Barnet Alliance against the cuts residents' group. Such a mean act would be best forgotten, would it not?

Let's not go over the whole shabby tale again.

Don't say anything about the unholy trinity of Councillor Brian Coleman, his partner in shame, the Reverend Adrian Benjamin, and their obsequious sidekick, Councillor Rowan Turner.

Don't mention the fact that at what is supposed to be a local summer show for the community, these bullying nobodies 'confiscated' the banner of a perfectly well behaved harmless community group, led by a senior citizen acting to the dictates of something they appear not to have, that is to say a social conscience, and now they refuse to return it, asserting alternatively either that one of the others has it, or that that they do not know where it is. Why did they take the banner? Because it was dangerous. It was expressing thoughts deviating from the political bias of the Tory trio monitoring the activities of residents in the park. Deviant thoughts are not allowed in Broken Barnet, and must be rolled up, carried away and hidden under the bed, where, Mrs Angry imagines, in the circumstances, no one is likely to stick a curious head over the edge and spot them.

We will gloss over the fact, too, that when the owners of the banner complained to the local police no action was taken. You might think this is rather unfortunate: Mrs Angry certainly does.

And let us not speculate upon the consequences of the following scenario: if Mrs Angry was walking through Friary Park, one sunny day and perhaps spotted the Reverend Benjamin sitting on a park bench, reading the Daily Mail, and if she marched over to him, objected to his reading material, snatched it off him, and ran off with it - well what would happen, do you suppose? If he went to the police and complained that some deranged woman had stolen his newspaper, would they not at least visit Mrs Angry and ask her about the incident?

Mrs Angry is very tempted to try something similar, in fact - and here is a message to our friends in the local police, please don't think she wouldn't: you know she probably would. In fact, Mrs Angry happens to know that quite a few rozzers read this blog on the sly, and she would hope that they might like to reconsider the rights and wrongs of this incident, and be seen to do something about it. It may not be the crime of the century, but it is an important point of principle, in defence of free speech, and democracy, and equal access to the processes of the law, no matter how trivial it might seem.

Another aspect which we will not discuss is the interesting information that has come to light from an inspection of earlier copies of the accounts of the Friern Show. Mrs Angry cannot tell you, therefore, that in fact the generous loan from the Reverend Benjamin's All Saints Arts Centre goes back some years, and was apparently deemed necessary because of cash flow problems, caused of course not by any failure in management by Chairman Coleman, but because of er, 'inclement weather' affecting the income.

Ah. Don't know why, there's no sun up in the sky ... stormy weather ... What a shame that no one thought to insure against the effects of poor weather on takings. And unfortunately, the costs of managing Friern show included, in the year ending 2008, such payments of £5,279 for 'admin/staff' and, oh hello: £870 for er ... 'security'. (Can anyone suggest a local company which might have been used for security? Nah, surely not ... ) Oh, and the accounts for one year, 2007, include mention of an uncashed cheque to the London Borough of Barnet for £542.85, for 'waste management and stage'. Someone was a bit careless weren't they, not following that up? Mrs Angry's accountant tried to find payments for the hire of the park, but they appear not to be listed. There may well be an perfectly acceptable reason for this, of course.

Which brings Mrs Angry to the last point she will definitely not bring to your attention.

The Chairman of directors of the Friern Barnet Summer Show is a Councillor Brian Coleman.

The charges for the use of local parks have been set by the Cabinet member for the Environment, who is a Councillor Brian Coleman.

Is there a potential conflict of interest in this position, bearing in mind the popularly held belief that discretion is used over the decision to charge for the use of local parks, and the scale of charge? No. Mrs Angry is confident that any interest by any party was declared wherever appropriate, and that Friern Barnet Summer Show has always paid the full extent of the charge, and has similarly paid the full amount this year, as Finchley Carnival was expected to, before being obliged to cancel the show, which is why there is really no need to mention the matter now.

PS: the missing banner is now tweeting from its place of incarceration: @TheLostBanner - please give it your support and help to bring him safely home ...

I have an idea for the alliance Mrs A. Remember those cardboard sunscreens for cars. If BAPS were to produce 100 or two of those and sell that at say a fiver each ( Mr Mustard has his wallet ready ) then when those of us who use the car to get to council meetings ( guilty as charged maam ) could put them in our windscreens ( come rain or shine ) as a show of support which councillors have to see, and they can't nick them can they.

If the mothers of these 3 naughty and disorganised "pillars" of the community read the blog perhaps one of them will remind their offspring of morality and get the matter sorted out. I don't read the bible Mrs A but even I seem to recall that it says "They shalt not confiscate" or something similar.

You big fibber, Mr Mustard: why have you been dressing up in leathers and claiming to arrive at the Town Hall on a motorbike, then? Just back from Mrs P's?

If you read the bible instead of visiting Streatham, you would know there are many reference to banners in the old testament, as I am sure the Reverend Benjamin will know: eg

'Declare amongst the antions and proclaim, set up a banner and proclaim, conceal it not, and say: Babylon (Broken Barnet) is taken ...'

Rather amusingly, considering that an active member of BAPS who has this lovely name, there is also the following, from the Song of Solomon:

'Thou are beautiful, o my love, as Tirzah, comely as Jerusalem, terrible as an army with banners ...'

"Same old Monneypenny, Britain's first line of defence," said Offord to Moneypenny.
"Why are you so late, James?"
"I fell out of an airplane without a parachute, and generally overhyped my Belize trip in the Barnet Times. Who's in there?"
"Q and the Minister of Soup Supplies."

"Ah James! The Minister and I want you to find a banner. But this could be difficult. There are CHOWDER figures, placed deep within the establishment, who will try to stop you!"
.
James found himself eating Cream of Mushroom - shaken not stirred - in the cafe in Friary Park. The Summer Show was over. A fat man in an overcoat was observing him.

"Do you expect me to talk?" said Offord. "No Mr Soupwaiter, I expect you to die!"
The lethal metal top of a Heinz soup catering tin came spinning through the air, towards 0057. His ejector seat fired immediately, and he found himself drifting down by parachute among the trees. The man climbed into a taxi, shouting "City Hall - only the little people use public transport!" and was gone.

James landed where the Summer Fair has been held. Various vegetable entries lay scattered around. A winning entry in the photographic competition - "MetPro Cars and the Mayor's Limo" with a scribbled addition "Sorry, this file is corrupt" blew backwards and forwards over the grass.

Suddenly Offord spotted a tent peg, carelessly left behind. There was blood on it!

... you been at those magic mushroom again,baarnett? Full marks, however, for deftly combining the themes of banner snatching and fabulous covert operations, Daniel Craig style. Oh alright, top secret balcony posing like Matthew Offord. I like a man in wet bermuda shorts,and no flip flops don't you, Julia?