The Lost Banner: A letter to the Archbishop 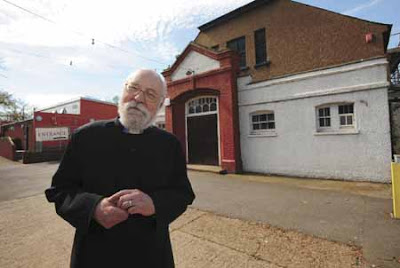 The Barnet bloggers have prayed together for divine guidance in regard to the shocking story of the Barnet Alliance banner incident at the Friern Barnet Summer Show, and have felt moved to express their concerns to the Reverend Benjamin's boss: no, not the Almighty Himself - yet - but his representative on earth, the Archbishop of Canterbury.

The Most Reverend the Lord Archbishop of Canterbury
Lambeth Palace
London
SE1 7JU
Via email to contact@lambethpalace.org.uk

We the undersigned are writing to you to draw your attention to the behaviour of the Reverend Adrian Benjamin, the vicar of All Saints Church in Barnet. As you are no doubt aware, the London Borough of Barnet, like many other London boroughs, is suffering huge cuts to public services. A campaign, Barnet Alliance for Public Services (BAPS), has been set up to defend these vital services and has been active in opposing many of the policies being implemented by Barnet Council. The campaign is broad based and not aligned with any political party.

As part of the campaign, BAPS intended to operate a stall at the Friern Barnet Summer Show, a local festival. Rev Benjamin is on the organising committee. Originally Rev Benjamin gave BAPS permission to have a stall, but withdrew that permission at the last minute on the grounds that he deemed the campaign to be political.

The campaigners from BAPS were offered space on another person's stall and they took part in the festival after all. When Rev Benjamin learned of this he brought some other men with him, dismantled the stall, confiscated the BAPS banner and asked the campaigners to leave the park. When later asked to return the banner, Rev Benjamin replied that it had been lost and could not be returned. Since Rev Benjamin was also extremely rude to the campaigners, an unseemly row has now developed. Rev Benjamin spoke to one of our local papers, the Hampstead and Highgate Express and made the following statement:

“If someone came in with explosives then it would have been me who was responsible for disposing of it and as far as I’m concerned it [the banner] is as predacious as a bomb.’’ He referred to Mr Silverman (one of the campaigners) as ‘‘a rogue, a rogue.”

(The original article can be viewed here: http://www.hamhigh.co.uk/news/hampstead_archdeacon_called_in_over_row_with_minister_1_1009722)

Mr Silverman is a 74-year-old pensioner, who has worked tirelessly as a community campaigner in Barnet for many years. There are several questions raised by Rev Benjamin's behaviour, which we feel we must set out.

a) Shouldn't a minister of the Church set a better example in his dealings with members of the public? Publicly denigrating people who are clearly involved in community activities in the press is surely not acceptable.

b) Comparing local campaigners to terrorists is highly insulting and irresponsible. We believe that this shows an appalling lack of judgement.

c) The failure to respect the property of others and the failure to exercise a duty of care with materials in his charge shows a callous disregard for other people. The BAPS campaign has extremely limited funds and the banner will cost a significant amount to replace.

As Rev Benjamin is a part of the festival organising committee, we believe that he has brought the Church of England and the wider Christian community into disrepute. As leader of the Church, we call upon you to intervene. We believe that, at the very least, Rev Benjamin owes Mr Silverman a public apology and that he should pay for a new banner for BAPS. As to whether Rev Benjamin is a suitable candidate for such an important role in the community and the Church of England, we will leave that to your wisdom and judgement.

Labels: God moves in a mysterious way his wonders to perform, whacking the bishop