Storytime in the library squat: Mrs Angry joins the circle 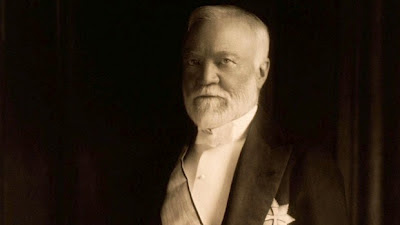 the philanthropist Andrew Carnegie, whose library in Friern Barnet has become a development opportunity for Tory Barnet Council

Come along: do sit down, everyone, in a nice big friendly circle ... yes, yes, I know we are not really friends at all, but we will pretend, just for today. Sit down nicely, Roger, there's a good blogger. Captain Cooper: are you listening? Sit up straight, and do stop making faces, there's a dear.

Yes: it's Monday morning - storytime in Friern Barnet library, and isn't it good to see so many of us back in here, when we thought it had been closed for ever, even if it is entirely due to the forcible occupation of a group of community squatters and the hysterical reaction of Barnet council's Tory leadership and senior management team?

Once upon a time there was a much loved local library.

It was an old fashioned library, built in the 1930s, thanks to a kindly benefactor who was keen to encourage and support the educational facilities of the ordinary citizen.

Yes, isn't that a quaint idea?

Oh dear, though: this lovely building is closed now, and the doors have been locked, but not the windows, apparently, and all of the books have been taken away.

I know what you are thinking, children ... is it because the ordinary citizen no longer needs a local library, or educational facilities, perhaps?

It is not. We need libraries as much as we ever did, perhaps even more so.

No: it is because a group of horrible Tory councillors and their equally horrible senior management team want to get their grubby little hands on the building and sell it for development.

Yes: that is very naughty, isn't it?

What would Andrew Carnegie think?

He would be very cross, and indeed when the building was opened, with his money, it was stated clearly that the library should remain for the same purpose in perpetuity, but here is the funny thing, children. Barnet Council say they have lost the deeds of the building, and so we will never be able to prove it.

Yes: Mrs Angry has just returned from possibly the most astonishing meeting she has attended, throughout the course of her blogging career.

If you have followed the previous few posts you will know that last week the former Friern Barnet Library was entered and occupied by a group of community squatters from Camden, intent on giving back the use of the building to local residents. Incredibly, the immediate reaction by the Tory leadership was not to send in the police, or bailiffs, or instigate legal proceedings, but to send round some senior council officers to see how they could accommodate the wishes of the squatters, by offering them another council owned property to occupy, in Friary Park.

This morning's meeting was arranged between council officers and the squatters in order to discuss their generous offer. Phoenix, the squatters' leader, insisted that local residents, activists and campaigners also be present, and indeed representatives of the wider community came along to the library to join in the debate.

We all sat in a circle and introduced ourselves. Apart from three squatters, there were four senior council officers: from libraries Heather Wills, and Mike Fahey (wearing some very fetching Chelsea boots) and from the senior management team, Captain Craig Cooper, director of commerce, and assistant chief exectutive Julie Taylor. Ms Taylor, whose role she told us includes being responsible for 'stategy and communications' (- and you thought Barnet Council didn't have any strategy, or grasp of communications, didn't you?) was the only one present who objected to the meeting being filmed, and so it was not. Her reason, stated in a girly way, was that 'she just did not like being filmed'.

Hmm, no, quite, thought Mrs Angry, but there you go, if you are a senior officer representing the council at a public meeting, and as you state, everything discussed is in the public domain, in this case there should be no reason to be shy. As it happened, there were four bloggers present, Mrs A, Mr Reasonable and the Barnet Eye, and the Bugle, plus a library campaigner taking minutes, and so all of Ms Taylor's clangers will still be noted for posterity. And yes, there were quite a few clangers.

Who else? Residents Rosie, Mike, Paul, Fiona, Ann, Keith - who stated he had been a resident and user of the library for 48 years, out done by Dave who has lived in the area for 60. Maryla, who has done so much to research the historical and architectural background of the library, DR Oliver Natelson, a local campaigner of vast experience, Julia, the Chair of Age Uk Barnet, Diane Taylor, local resident and journalist who writes for the Guardian. Labour councillors Pauline Coakley Webb and Arjun Mittra also attended.

Phoenix explained that he saw himself as the facilitator, and laid a few ground rules for the meeting. Mrs Angry smiled to herself, relishing the discomfort of the senior officers obliged to listen to an explanation of how to conduct one self in debate according to the intricate, if laudibly democratic, etiquette of the direct action movement.

If you want to speak: put up your hand, and take your turn. If you have a direct point of information, point two fingers of both hands. If you want to show your approval, wave your hands up and down with thumbs and fingers circled, (and hope, thought Mrs Angry, that no one mistakes this for a suggestion that you are a complete wanker, twice over). Phoenix asked everyone to try this last gesture. Mrs Angry was beside herself with laughter at the efforts of Captain Cooper, jazz hands shaking, face like thunder.

It was clear that the thought of a democratically ordered discussion, in which mutual respect is given to all members, was a challenging concept to those who work within the culture of contempt that is the mark of the tinpot Tory dictatorship of Broken Barnet. But we struggled through, somehow.

Julie Taylor announced that sadly the Councillor responsible for libraries, ie Robert Rams, could not be with us, altough he would have liked to have been, (really?) because he was, aww, on his honeymoon. Oh, said Mrs Angry, but surely some other Cabinet member could have come? Or even the leader? What about Cllr Thomas, asked Rog. Ms Taylor thought he might have a day job, which would have prevented his attendance. In fact, thought Mrs Angry, Rams would not have dared set foot in Friern Barnet, and Thomas should have been there as now the building is the responsibility not of libraries but of property services. 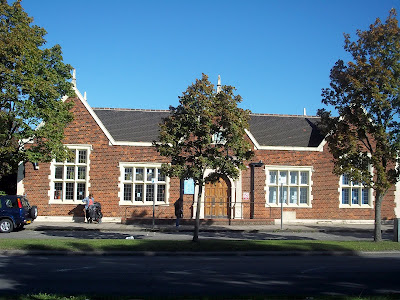 Carnegie's library: up for sale.

Phoenix asked Julie Taylor what she thought of voluntary libraries. Mrs Angry cringed. Of course she likes them: great way of getting rid of staff. She then made a possibly over enthusiastic claim, that the council would be prepared 'to contribute' in terms of resources to a new proposal. You know, like they did with the residents of Hampstead Garden Suburb, supplying the library there with everything they asked for, except in this case nothing will be given if any library proposal is made that is based where it should be, in the library building that already exists.

Mrs Angry had a question.

Why is it, she asked, perhaps, yes, perhaps a little naively, that it has taken the occupation of a library by a group of squatters to bring you to the point of any meaningful discussion with local residents and campaigners? This meeting has only come about by holding a gun at your head ... (Peace loving Phoenix looked upset at this point) Metaphorically speaking, of course, added Mrs Angry, therefore, with a polite smile.

We have always made ourselves available for discussions, claimed Ms Taylor. Local residents shifted crossly in their seats.

All the disadvantages were listed by turn by those present: the distance from Friern Barnet, especially for the elderly, children, the disabled, the difficulty in parking, it is not served by local transport, is in a hilly area, users would have to walk through a dark park in winter to reach it, and the rooms offered are simply unsuitable for disabled access.

Craig Cooper speaks at last. 'Cheers, Phoenix', he began, in what he must have thought was a suitably right-on opening move. Mrs Angry tried not to laugh at the absurdity of the situation, and instead to marvel at his opening statement. He had not been previously aware of the problems with access at this location. What? Why not? He mumble some meaningless bla bla bla officer speak, as if it made any difference.

Julie Taylor thought we should know that Friary House is a very very nice building. She's right, it is. Just not a suitable replacement for Friern Barnet library, thank you all the same. We have to get out of this building, ie Friern Barnet library, and sell it. We must do this because we have a duty to keep council taxes low. Erm?

Mike Gee pointed out that the idea of saving money this way is a myth: the costs of keeping the branch going are not huge and could be found if they wanted to.

Keith Martin reminded Ms Taylor and colleagues that there is overwhelming support for the library remaining where it is. It is a purpose built building. Rams' pointless Arts Depot library substitute was a costly mistake, and the feasibility study for the much vaunted, but as yet imaginary landmark library would be astronomical.

Fiona Brickwood made some very good points: as others has mentioned, the closure of this library has enormous impact on the sustainability of the local community and its economy. There is no remit for the council's actions in closing the branch: the consultation process had shown overwhelming support for the retention of the library, and the original endowment of the building from the Carnegie Trust was on the basis that the library building would remain used for that function. She wants to see the building retained as part of an enterprise hub, which she argued would maintain the life of the local community.

Ms Taylor did not want to respond to the comment about remit (ie democratic mandate) as it was 'a technical point'. She assured everyone that the council wants to support communities and literacy and all that sort of One Barnet bla bla bla stuff which means nothing. And then she made a remark which does mean something. She said that 'Friary Park is the only solution on offer.'

End of story, then, and so much for negotiations?

Let's see, shall we? 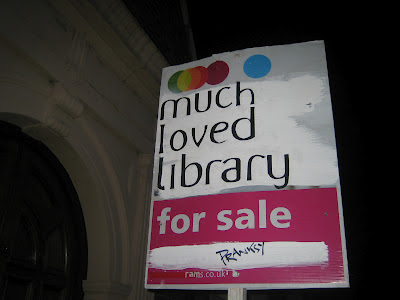 Labels: clangers, holding a gun to your head, jazz hands

Justt curious - If the council have lost the deeds how are they going to prove that the building is theirs to sell? Squatter's rights?

Hmm: that's what I was thinking. Not sure you need deeds to sell a property if you have other documentation, but might be wrong ...