About the old localism thing, Eric: was this what you meant? Taking over the Town Hall, Broken Barnet style 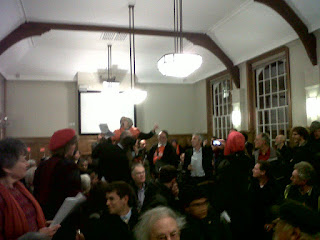 As you may have heard, there was a small but perfectly timed revolution in Barnet last night.

Yes, a very British revolution: polite, sort of; respectful of the furniture, mindful of the need to thank the police for their good humoured attentions, and leaving a roomful of Tory councillors in a state of fear and trembling, as they contemplated the now certain prospect that they will lose control of this borough at the next election.

Or rather no: they have already lost control of this borough, and last night the people of Barnet picked up the last pieces of the Tories credibility, as representatives of their electorate, and threw it all back in their faces.

It was a magnificent sight.

Last night's Cabinet meeting was of course convened in order to 'discuss' the recommendation by senior officers that the authority should allow the giant outsourcing company Capita to take over control of £750 million worth of our council services. The Tories are now trying to present the value of the deal being 'only' £320 million, but the larger total is the real value of the deal if, as both sides intend, it lasts fifteen years. Yes, fifteen years.

There was never any doubt that this contract would be approved by the quisling councillors. They have colluded with senior officers and private consultants in arranging and agreeing this deal in secret, in the absence of any meaningful scrutiny or consultation, betraying the best interests of the residents and taxpayers of Barnet, acting in defiance of all reasonable criticisms, and refusing to engage with the electorate in any debate on the most significant policy decision ever made in the history of this borough, representing the largest act of privatisation by any local authority in the United Kingdom.

And their mandate for undertaking this monstrous commitment? None whatsoever. One Barnet and the wholescale outsourcing of council services to the private sector was not included in their pre election manifesto, and has been imposed on the residents of this borough by stealth, by deception, and in breach of the most fundamental demands of the democratic process.

As a Conservative Secretary of State for local government attempts to convince the country that he is empowering every citizen with greater control over their own lives, with more choice, with more freedom, with greater transparency, and greater accountability, here in Broken Barnet his Tory colleagues are doing everything they can to expose the great fat lie that is the localism agenda. They have demonstrated the impossibility of influencing an elected authority which is determined to follow its own crooked course, with no fear of restraint, and no respect for the people it is supposed to represent, an authority which is so frightened of expressions of dissent from its own electorate that it resorts to amending the constitution to forbid entirely the discussion of any council policy at local residents' forums, a ruling which is enforced with iron fisted determination at every meeting.

What can we do? There is no accountability, in Barnet, until the next election: or so our councillors believe.

No accountability in this borough, but there is a world beyond the boundaries of Broken Barnet, and there are laws which protect the citizens of this country from injustice, and injury. Solicitors have been instructed to fight Barnet Council's attempt to sell us into bondage with Capita, and as you will have seen from the previous post, there are many grounds on which a judicial review may be pursued.

Yesterday, just before the meeting, Barnet Council received notification of intent to apply for a review of One Barnet, based on the allegation of failure to consult, failure to consider best value for money, failure to address issues of equality, breaches of procurement law, and placing undue pressure on councillors to vote in party line rather than by individual choice.

The news of this legal challenge undoubtedly gave rise to a greater intensity of mood amongst the residents present at the meeting last night: a sense of euphoria, and renewed strength. The room was packed, and an overflow rooom was used: around two hundred people altogether. Also sitting at the front of the public area were several Tory councillors, who later had cause to regret their attendance.

The meeting began with public question time. Leader Richard Cornelius simply ignored the majority of questions, declaring them to be rhetorical, and therefore unworthy of response. He had nothing to say, therefore, to Julian Silverman's musing on the subject of the words of outsourcing guru and sometime BT, sometime Barnet consultant Max Wide and his alleged remark: 'Never waste a good crisis, and learn to love a recession'. Mrs Angry laughed to herself. Mr Wide now works for iMPOWER, the company which, with Agilisys, acts as the One Barnet 'implementation partners' at a cost, last month, of a staggering £780,000.

Mrs Angry's question was to Councillor Cornelius, wondering why he thought we should trust someone who could not remember on Sunday which services he is outsourcing, and who had no idea that his own officers had changed the model of the DRS tender to a Joint Venture without any authority, and by the way, in view of the fact that a notification of intention to apply for Judicial Review, should he not do the sensible thing, and call a halt to One Barnet. Councillor Cornelius did not like Mrs Angry's question, and it appeared that his view of what comprises a sensible thing does not equate with hers. Or words to that effect: she wasn't really listening, to be honest.

After the questions, Labour leader Alison Moore addressed the committee and pointed out that One Barnet meant an end to local democracy as we know and understand it. The Tory councillors looked on, thinking to themselves that yes, that was exactly their intention.

Councillor Daniel Thomas now launched into one of his 'I am now going to speak very quickly and smoothly in the belief that you will not notice the torrent of shite which is spewing out of my self satisfied face' diatribes, not quite quickly enough to prevent Mrs Angry commenting that he was not going to be around to see the progress of One Barnet. He replied without so much as batting an eyelid that yes, that was how strongly he felt about the marvels of One Barnet - how noble of you, retorted Mrs Angry, admiring his Sydney Carton performance, as he stood on the scaffold, with his head in the block.

The background of French revolutionary politics was a fitting theme for the events which then transpired, as it happened, because - oh look, fellow blogger Citizen Barnet was now standing on her chair, fist in the air, declaiming like Mme Defarge. Citizen Barnet is usually very quiet, considered, and well mannered - but when she is riled, she can give it out like the best of them. Last night she was riled, and she was the best of them: see the following footage, and enjoy, while Mrs Angry takes a break. More later.

I like the way that, when the video ends, YouTube offers the next one:
"Bugger the Bankers!"