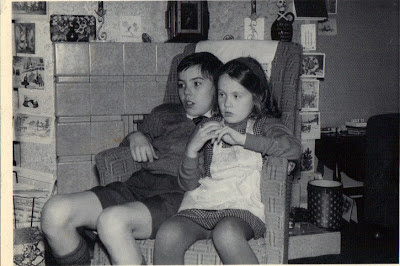 Look, Mrs Angry's brother: that was then ...

Someone suggested to Mrs Angry today that this has been a turbulent year, in Broken Barnet. Indeed it has, in all sorts of ways.

One of the unexpected consequences of what has happened here, and further afield, in the last couple of years, the timescale of our insurgency, has been the joy of making so many new friends, whose comradeship, sense of fun and support has been such a blessing, so thank you all, and I wish you all peace, love and happiness over the festive season.

It won't be like that in the Angry household, clearly, but good luck to everyone else ...

And here is Mrs Angry's favourite carol, rather melancholy, but very beautiful words by Christina Rossetti, whose family, and the wider pr-Raphaelite circle, had what are now little known connections with Finchley, Hendon and Highgate, here in Broken Barnet.

Christmas Day evening: it seems HM the Queen has decided to emulate Mrs Angry's example, and quote from 'In the Bleak Midwinter', to end her own Christmas message.

Mrs Angry notes that although the Pope is now on twitter, and no doubt intends to follow Broken Barnet, he has wisely decided to do his own thing this year, and not copy Mrs Angry in his annual address from the Vatican. Her Maj might like to do likewise next year.

Labels: Galway Bay, Happy Christmas your arse I pray God it's our last, I turned my face away and dreamed about you

2 years ago I had never heard of you, the rest of the fab four who became the famous five, or One Barnet (the shame!).

I wanted to echo your thoughts of bloggerly love and say how much I too have enjoyed being part of the blogger's inner circle and the wider network of lovely tireless caring people of all different backgrounds, nationalities, ages, sexes who have created, thanks to the stubborn lunacy of Barnet Council, one of the greatest examples of Big Society in the country.

I love you all.

Happy Christmas to one and all and I look forward to working with you all in 2013.

Never heard of ME, Mr Mustard? Where you been? In fact, I had only just been invented.

I hope you had a lovely day, and that your headached is better.

Regarding the updated pictures...

Goodness, hasn't he aged a lot.

Hmm. Yes: Baarnett - that is the appropriate comment to make. Of course he is A LOT older than Mrs Angry, and working for the London Borough of Broken Barnet for has taken its toll.

Guess which much loved councillor came up to him at a funeral recently, and said how much he missed him? Yes: Brian said everything had gone to pot since he left. And, asked Mrs Angry, as a strange look passed over her brother's face, did he ask after your sister? He did not, replied Mrs Angry's brother, with a sigh. I imagine he wanted to though, don't you?

We are, none of us, ageless!

But thank you, Mrs A, for introducing me to The Unthanks, they do melancholy extremely well as I can attest having whiled away some precious life minutes watching The Green Man (of course!)... :)

Thank you, also, for your entertaining and oft times amusing bloggerings (?); I have been informed, amused, bemused and entertained, in equal measure, by your tireless fight for right. Would that there may be more we shackled onlookers might contribute to the cause...

Seriously, I look forward to more of the same in 2013, perhaps a very lucky year for all who live in and fight for their Barnet to be returned to its rightful owners!

My best wishes to you and yours, including your much older sibling, and all who tirelessly campaign with you.