The posts of the last twelve months tell the story of something quite extraordinary: the tale of One Barnet, Two Barnets, and a community in rebellion - as the career of Brian Coleman goes into freefall, and the Tory party in Barnet tears itself apart, in the course of a malodorous billion pound programme of outsourcing, watch the creation of an uprising amongst the people of this borough, an insurgency, a democracy movement, call it what you will, it has drawn the attention of media interest throughout the country and beyond. 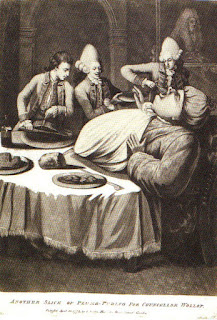 The month began with an impertinent request, avoided as long as possible by Barnet officers, for Mrs Angry to be allowed to view the withheld entries of our Tory councillors' register of interests. This request was eventually granted, in circumstances of absurdly high security and supervision, and was most revealing. Some of the Tory councillors, can you believe it, citizens, both online, and in the withheld entries had been, shall we say, economical with the truth? 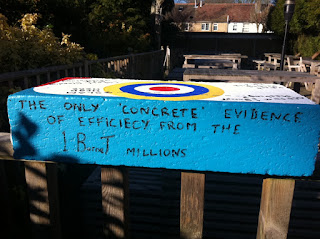 Since this post was written, at least one other very senior officer has openly left Barnet to join a company whose contract was agreed during his term of employment - and another is rumoured to be following the same course.

At the beginning of the year almost no one wanted to talk about One Barnet, almost no one had heard of it, and that included our Tory councillors who were still happy to endorse the programme whenever so instructed. In January Mrs Angry reported that Councillor John Hart, challenged by Citizen Barnet, had typically shrugged off any sense of responsibility:
"He mumbled something about One Barnet privatisation along the lines of: "Don't really understand it... councillors don't... we just have to go along with it, don't we?" To which I said, you should inform yourselves about what it means, shouldn't you? And he just dumbled off, muttering into his moustache."

Hart made these remarks at the 'Talk Barnet' event at which Mayor Boris Johnson made a rare visit to our borough, and held a question and answer session MCd by a sweating AM Brian Coleman, desperate to avoid awkward questions from his adoring constituents. 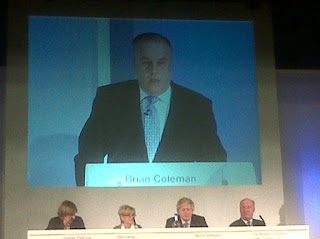 At a special council meeting there was  furious debate about Brian Coleman's catastrophic new parking scheme, which had overnight reduced trade in our high streets by around 40 %.

According to Coleman, this was the fault of the shopkeepers:

'Quality retail businesses that are flexible will always survive - those that are not will go to the wall. The lazy cop out is to blame the council.'

Hmm. The truth was that only councillors who are flexible will survive, and so it was to be Brian Coleman's career that went to the wall. And at this meeting, by chance, Mrs Angry made the acquaintance of a Finchley trader's representative, cafe Buzz owner Helen Michael, who was incandescent with rage over the Tories' attitude over parking. This meeting was was to prove a fateful one, for Councillor Coleman.

In February we learnt how devoted loyalist Cllr Coleman had, on our behalf, splurged £1,000 of our council tax on a four minute musical composition by the son of one of his chums, the banner snatching Rev Adrian Benjamin, in order to ingratiate Himself with Her Maj.  This vanity project was entitled  'Common Wealth'. Common in honour of Himself, and the Wealth provided by us, of course.

Mrs Angry visited the Church Farmhouse Museum, now closed and ransacked by Councillor Robert Rams, and whose grounds are also up for sale and possible development, and she wondered into the adjoining graveyard, where one particular intimation of mortality touched her grievously - (and no, this wasn't photoshopped ... ) 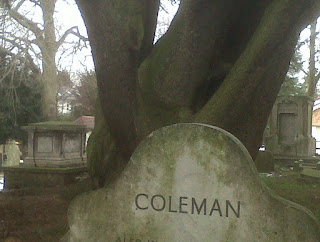 Another of this year's stories began to gain momentum now: the story of the library that refused to die: Friern Barnet Library, in a Labour voting area, earmarked by our philistine Tory councillors for closure purely because of the development potential of the property, rather than as a natural conclusion of the 'rationalisation' of library services that Rams and co claimed was the reason for its death sentence. 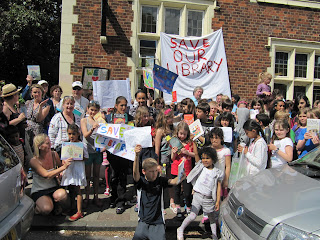 Rationalistion, of course, still allowed for the enthusiastic and costly subsidisation of a volunteer library for the millionaire residents of Hampstead Garden Suburb Library. But then again, it is entirely rational to keep onside the residents and voters of the most affluent ward in Barnet, isn't it?

It is a truth universally acknowledged that the Mayor of London only visits the outer reaches of his domain when an election is in the offing, and this year was no exception. Another pre election ritual is the handing out of largesse to the needy, of course, and as our Mayor had given a hand out to Barnet for the Dollis Valley Green Walk, a welcome photo opportunity lured Boris to these parts in March.

There he was, strolling along the brookside path, revelling in the rarely found peace and sylvan beauty of this walk, completely alone - except for an attachment of press officers, photographers, local party agents, and an assortment of Barnet Tory councillors, when, oh dear, who should come along but Mrs Angry's favourite Boris botherer, Mr Dennis Pepper, who is a tireless advocate of local greenspaces, especially Windsor Open Space, and who then promptly gave Boris a tour of the walk and and explained what an almighty cock up of the whole project Barnet had made of the grant. Cllr John Thomas (behind Boris, below) and his Tory councillors chums were furious. 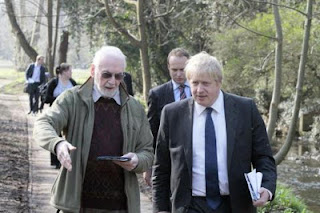 Also in March was the premiere of the first of two documentaries about Barnet produced by Barnet Eye blogger Roger Tichborne: A Tale of Two Barnets.

This film gave a voice to the residents of Broken Barnet, highlighting the enormous political fault lines that were opening up beneath our feet - it also produced the classic statement by Tory 'leader' Richard Cornelius:

'I'm not sure there is much that I can change about Barnet' ... followed by the revelation that he therefore had set himself 'quite low' expectations. In this respect, Councillor Cornelius has proved to be entirely successful. He has shown no leadership, and presided over nothing but a succession of disasters in his time in office.

Despite the pleas of residents in Friern Barnet, including some remarkable children: Hannah, Finlay, and Oscar, who addressed a council committee, and put to shame the blatant cynicism of their elders, Rams and his colleagues agreed to close Friern Barnet Library.

On the last day of opening, a number of residents occupied the building, and stayed there for several hours, to make the point: this is our library, not yours. And they made the point in style. 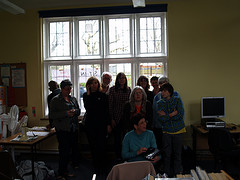 Barnet Council's spin doctor, the Tooting Twister, was reported to have ordered that the occupiers should not be allowed to use the loo, and the protesting residents were therefore compelled to pee in a bucket, an appropriate metaphor for life in Broken Barnet, you might think: 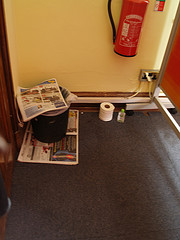 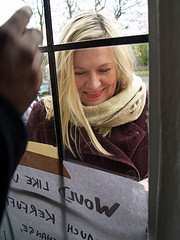 and was amused to see this poster: 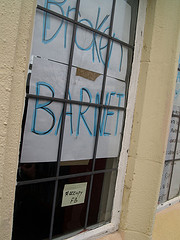 The occupiers left the building later that day: 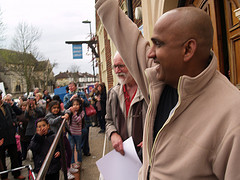 Some might have thought that the story ended there. They were wrong. Welcome to the People's Library: popping up every Saturday, on the green outside the building closed by Barnet Council. 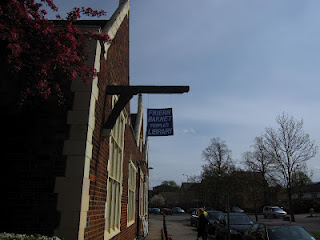 Also this month, the Tale of Two Barnets film was shown at the House of Commons, attended by some MPs - no, no, not our local MPs, obviously - and many residents of Barnet, and of course your blogging correspondants Mrs Angry, and Mr Mustard: 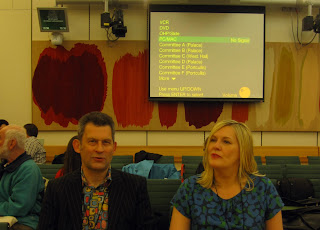 .... in fact we did bump into a trembling Mike Freer later in the evening, who hurried away like the White Rabbit, late for a very important date. A date with destiny: May, 2015, one imagines. Can't wait, can you?

Back in Broken Barnet, the campaign against the new parking charges gained new impetus as trade in our high streets continued to decline: Helen Michael decided to produce a poster for her fellow shop keepers to display: 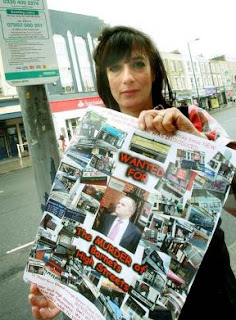 Oh dear: popular as the poster was to prove with local traders and residents, someone was not awfully pleased with it ... we were now in the run up to the May elections for the London Assembly, and our own AM, Brian Coleman, was only just beginning to realise that his chances of being re elected were, well - minimal ...

In confirmation of a restless electorate here in Barnet, April saw a by election in East Finchley had been won by a hugely increased majority by the lovely, sweet natured, sweet toothed Labour candidate Arjun Mittra: 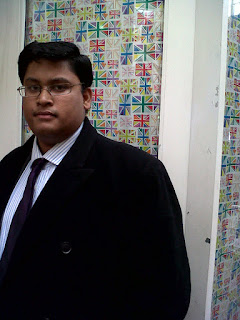 London Assembly Labour candidate Andrew Dismore gave his full support to the Friern Library campaign, and came along to one of the pop up libraries to compare Australian sheep shearing methods with bloggers Barnet Eye and Barnet Bugle: 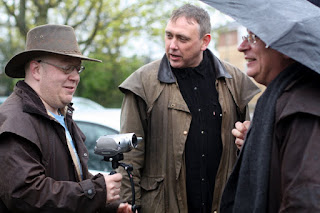 and also received Mrs Angry's official endorsement, which was really all he needed for electoral success, of course: 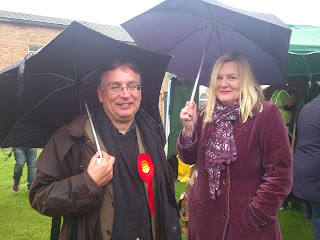 May. Oh: May. Fabulous month. After a low key electoral campaign, which consisted of Brian being locked in a trunk and sat on by Lynton Crosby, he eventually escaped and was seen running about the streets of High Barnet, arguing with shopkeepers, apparently upset by Helen Michael's parking campaign poster, and demanding that it be removed. 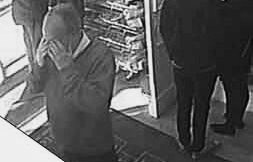 Brian appeals for sympathy in a Barnet sweetshop. Aww.

And then ... oh dear: fate finally caught up with our Brian, and his defeat in the Assembly elections was witnessed, with no little pleasure, at first hand by Mrs Angry - and his ultimate nemesis Helen Michael - here at the count at Ally Pally: 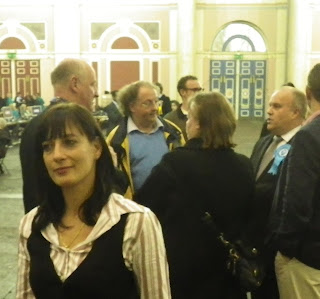 Here he is, kissing goodbye to his career, as Assembly Member, Chair of Lfepa, and Cabinet member of Barnet Council, to be followed later in the year by even more controversy and the loss of his last remaining hold on power.

Looking on anxiously is our local MP Mike Freer, who was visibly shaken at the humiliating defeat of his Tory colleague, and could not help but see the significance this result holds for his own election prospects in 2015, in a borough seething with electoral discontent. 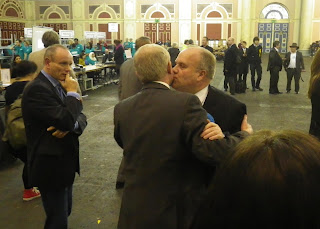 Dear me, not even half way through the year ... Part Two to follow later ...