A Storm in a Teacup: Barnet Tories ignore 8,000 residents' demand for a referendum 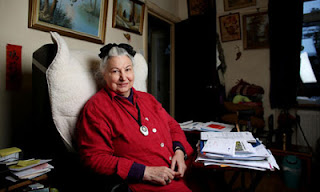 Maria Nash, whose application for Judicial Review of One Barnet will be heard in the High Court in March - pic Graeme Robertson for the Guardian

Mrs Angry was not able to attend last night's Full Council meeting, (which in many ways was a great relief), but by all accounts it was a memorable event.

Dr Azi Khatiri from Barnet Alliance presented a petition signed by 8,000 residents demanding that Barnet Council hold a referendum on the One Barnet programme. You may see her speech here, or read the text below.

I am here on behalf of Barnet Alliance for Public Services and over 8,000 residents who have signed this petition asking for a referendum on the One Barnet Programme. This petition, growing at the rate of more than twelve hundred signatures a month, represents the groundswell opposing One Barnet.

It is the second largest petition that has been presented in over 10 years and yet we have little confidence that this administration will listen to the people it is meant to represent. Why? Because:

·         you have not consulted us about One Barnet and until recently refused to discuss or debate it publically;


·         you have been close-minded when we have appeared before you at Cabinet and committee meetings. Your questions to us were not about anything we said but were feeble attempts to gain support for your own position;


·         you have failed to answer substantively any of the detailed questions about One Barnet that we have asked;


·         you have restricted the opportunity for open discussion of issues that concern residents at residents’ forums.


In addition, you have failed to listen to constituents:

• on the disastrous contract with NSL, which has damaged the local economy, caused businesses to fail, angered residents and is not making its promised savings;


• on the closure of Friern Barnet Library and the thousands of pounds wasted on an ill-conceived fantasy of a ‘landmark library’;


• on the Local Authority Trading Company “Your Choice Barnet”, which has been failing vulnerable people across the borough while losing money.


For you, formulating policy seems to mean spending millions of pounds on consultants and promising what you cannot deliver. When it comes to scrutinising policy, you have dismissed the significant flaws and risks we pointed out to you with superficial reassurances and rationalizations that convince only you.

When charged with scrutinizing the contract with Capita and your own lawyers confirmed that you couldn’t change it, you did not even ask ‘But what if it is not safe?’


What will the results be? Instead of your guaranteed savings of between £41m and £120m – do you even know how much it’s meant to be? – we predict:

• lower so-called savings at the expense of reductions in the quality of, and wholesale cuts to, services.


You predict betterment; we predict:

• the marginalization of thousands of residents who don’t use computers or mobile phones and will be lost in Capita's automated customer services system;


• the loss of a meaningful relationship between residents, their councillors and the council;


That will be your legacy. You can go on blaming everyone other than yourselves, and believing in your fantasy improved economy. You will be gone from this building after the next election but perhaps you will still be among us here in the borough and will wish you’d done a proper job of consulting your neighbours.


We will continue to campaign:


·         for good quality public services  and against their sale to private companies;


·         against each of you who supported One Barnet if you stand again for public office here or elsewhere, as we did in the GLA and Brunswick Park elections.

We will continue to campaign for the next elected council – whichever party it is – to bring services back in-house if the contract with Capita goes ahead, and for a council that truly engages with its residents.

And we are not alone: the High Court has decided that the case for a judicial review brought by Maria Nash requires a hearing. It will come before the court after 18 March. This means you cannot sign the contract with Capita before then.

In this petition, the residents ask for their democratic rights to express their opinion on One Barnet in a referendum. We expect the council to scrap the One Barnet Programme if the referendum so concludes."

Another notable part of the evening's proceedings was the extraordinary position taken by Barnet Tory councillors in response to Mayor Boris Johnson's proposal to close the police stations in their own former stronghold of High Barnet and Whetstone. As today's press release from Labour states:

The 5 Conservative councillors representing the wards of High Barnet & Totteridge tonight failed to support Labour’s motion at tonight’s Full Council meeting to stop the closure of two police stations in their wards.

High Barnet councillors David Longstaff (the Cabinet Member for Crime and Community Safety), Bridget Perry and Wendy Prentice all voted against Labour’s motion to stop the closure of Barnet Police Station in their ward, and Totteridge councillors, Richard Cornelius (Leader of the Council) and Alison Cornelius also failed to support Labour’s motion to stop the closure of Whetstone Police Station located in their ward.

Conservative Mayor of London, Boris Johnson, is proposing to shut the front counter service at both police stations leaving Chipping Barnet constituency without a single police station open to the public.

Labour’s Spokesperson for Crime and Community Safety Cllr Alex Brodkin said: “When will the Barnet Tories stand up for local people and their services.  These closures and the other cuts to emergency services will put residents’ security and safety at risk. Even the local MP – a senior member of the Government – doesn’t agree with this plan to close these police stations. The Barnet Tories are a complete disgrace!”

Deputy Leader Cllr Daniel Thomas reportedly dismissed the petition calling for a referendum on One Barnet as 'a storm in a teacup'.

Interesting story in the Guardian today, Page 6, by Rob Booth -

Our disgraceful Tory councillors may think that the demand by 8,000 people for a referendum is something negligable, a fuss over nothing, but it has taken only one Barnet resident, Maria Nash, to present, through her legal representatives, an argument that has persuaded the courts to allow a Judicial Review of the One Barnet programme to take place at the Royal Courts of Justice, in March, just days before the contract with Capita for up to £750 million of our council services was due to commence.

Storm in a teacup, John Thomas?

More later, as Mrs Angry has to see a man about a very annoying dog.
Posted by Mrs Angry at Wednesday, January 23, 2013

Labels: capita, come in she said I'll give you shelter from the storm, gimme shelter, I'm a little teapot, judicial review, storm in a teacup

Having been through the "no you can't have a referendum" treatment here in Carmarthen, can I direct you to the Local Government Act 1972 which details the legal procedure for calling a local referendum. It is quite straightforward but vital that you comply with all the steps - calling a public meeting, posting notices of the meeting etc etc. Can't remember the exact section of the Act but googling "local" or "parish referendum" will provide sites which can help.

Thanks, Lesley: Barnet Tories have neatly demonstrated yet again their own obstinate refusal to engage with residents and consult with them on this massively important issue. Foolish, but predictable.

Mrs Angry is confident that the dog will be dealt with, Ron. Mrs Angry herself is beyond all help, sadly.