Friday joke: Broken Barnet, Freedom of Information, and yet another blunder 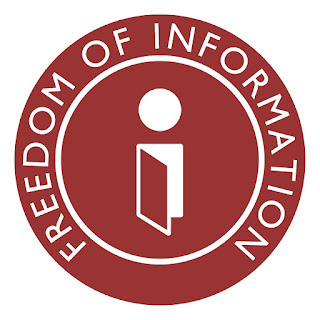 One of the most shameful characteristics which mark the blighted history of the Tory administration here in Broken Barnet is the obsessively secretive way in which it operates.

This obsession has moved from a deep suspicion of any scrutiny of its decision making processes to something which approaches a culture of corporate paranoia.

Consider the farce that passes for consultation in this borough, the repression of all public debate, the probably unlawful amendment of the council constitution merely to prevent the electors and taxpayers of Barnet from discussing issues of concern at Residents Forums, and the abolishment of the council's own scrutiny committee dedicated to the One Barnet privatisation scam.

Consider, as well,  the truly deranged, manic denial of the principle and processes of transparency in this borough: the conflicts of interest that are not addressed, the interests which are not declared, the accounts which are removed from the statutory right of inspection - and most of all, the institutionalised contempt for the legal obligations that all public bodies have in respect of the Freedom of Information Act.

All the Barnet bloggers, and many other parties, are used to the many different tricks our council employs in order to dodge the requirement to obey the laws that relate to requests made under this Act of Parliament. I say dodge: they break the law, openly, continually, in order to hide material which is politically sensitive, or embarrassing. It is an abuse of the law that the Information Commissioner simply cannot cope with, as the procedure to deal with such breaches is so cumbersome, and inundated with similar complaints from many sources.

Mrs Angry has already written about the latest brazen defiance of the FOIA by Barnet Council in regard to documents regarding the One Barnet DRS privatisation, and the decision by senior officers to change to a Joint Venture model, when such a decision should only be made by councillors.

This action by the Directors Group was taken in secrecy, without the knowledge or involvement of the Leader, Richard Cornelius, or any member of the political executive. In other words a major policy decision, that will affect contracts worth £250 million of local taxpayers' money, and affect hugely important public services, was taken by paid officers with no democratic accountability.

Mrs Angry requested the minutes of the Directors Group in August: she was told she could not have them for the ludicrous reason that they were 'imminently' to be put in the public domain. They were not, nor did the promised appeal take place, nor will any officer reply to enquiries about the request: all of these actions in breach of the law.  A complaint has been made to the ICO, this will take a certain amount of time, and in the meanwhile the competitive dialogue process regarding the DRS tender continues and indeed approaches a decision.

This example is one of many instances where Barnet Council defies the law for its own purposes, and is frankly an illustration of the extent of corrupt practices that permeate the culture of this rotten Tory borough.

Other instances of the abuse of the FOIA include the treatment of fellow blogger Mr Mustard, who has been targeted for daring to do what the Secretary of State expects citizens to do, that is to be armchair auditors, and hold local councils to account, in particular for their financial and commercial activities.

That this is necessary is due largely to Eric Pickles' decision to abolish any real external scrutiny of the audit process: see David Hencke's post here for details of the impact that this will have on local authority spending and accountability.

Consider, if you will, how ineffectual has been the external audit process in Barnet, in the light of the huge failure in procurement practices that went unnoticed, until exposed by the Barnet blogosphere, and try to imagine how much worse it will be in the future.

Mr Pickles wants councils to allow citizens to hold them to account, yet citizens who do attempt this in Barnet are obstructed at every attempt to obtain access to the relevant information.

Barnet Council, absurdly, has tried to silence Mr Mustard by claiming he is a 'data controller' in breach of the DPA, (a claim rejected out of hand by the ICO), and Barnet now routinely rejects all his FOI requests as 'vexatious', even thought the law states that an individual may not be vexatious, only a specific request.

When Barnet bloggers Mrs Angry, Mr Mustard, and Mr Reasonable attempted to exercise their right to inspect the authority's accounts last summer, again, in defiance of the law, we were prevented by being presented with material redacted to the point of almost total obscurity.

Why is Barnet Council so determined to repress the disclosure of information that should be right be in the public domain?

Because as part of their culture of secrecy and need to rule by force, rather than by reason, information is power, and represents a threat to their own ambitions and nefarious purposes.  The concept of the freedom of information, as well as the freedom of expression, is an affront, and a challenge to any regime of repression, or incompetence, or corruption. Open government, the stated aim of Mr Pickles, is an anathema to his Tory colleagues here in Barnet, and to the senior officers who are intent on running this borough according to their own purposes.

How ironic, then, that the disclosure of information that should be in the private domain, that belongs to the citizens whom this authority is meant to serve, is treated with such a lack of care. Or perhaps this is the predictable act of a council to whom respect for the rights of citizens is such a low priority.

For three months in 2010, Barnet was monitored by the ICO for 'timeliness' in its response to FOI requests, but Barnet also has a bad record with the Information Commissioner in regard to data protection breaches: there have been two serious breaches in the last couple of years, the first regarding the loss of personal information regarding 9,000 pupils  - including data relating to one of Mrs Angry's children - swiftly followed by the loss of very sensitive material regarding the 'sexual activities' of vulnerable children and young adults, for which the authority was fined £70,000 - a fine we, the taxpayers pay on behalf of the council's incompetence.

According to a statement from the Information Commissioner last May:

"Simon Entwisle, the ICO's director of operations, said the potential for "damage and distress" in this latest breach was obvious. "It is therefore extremely disappointing the council had not put in place sufficient measures in time to avoid this second loss," he said.

"While we are pleased that Barnet Council has now taken action to keep the personal data they use secure, it is vitally important that organisations have the correct guidance in place to keep sensitive paper records taken outside of the office safe. This includes storing papers containing sensitive information separately from laptops."

Mrs Angry can now exclusively reveal that Barnet is again breaching the requirements of the Data Protection Act through what appears to be the grossly incompetent management of its own website's FOI Disclosure Log.

A cursory inspection of the requests uploaded to this log has shown a number of requests and responses that have been uploaded with unredacted personal details of the individuals concerned.

In one example, the private arrangements concerning the care of a vulnerable elderly resident have been published, despite the heading of the response itself clearly stating 'Do not publish'.

In another, a property that is the focus of a planning dispute is identified, and as in the first example, individual (non senior) officers are named, yet someone has carefully redacted the name of the developers involved (the redaction of 'commercial' sensitivity is always carefully observed, in Broken Barnet).

In another comically inept example, a resident has asked, rather like Mrs Angry, for details of empty residential and commercial property in the borough. The response is to refuse this request, on various grounds, including that there would be a breach of the data protection act: this concern for personal data, however, does not extend to the person making the request, whose name and email is published on the internet for everyone to see.

In fact this last example is the perfect illustration of the attitude of Barnet Council: access to their information, material that is politically or 'commercially' sensitive, must be jealously guarded, even in defiance of the law, but the need to secure the personal information of residents is something which they regard with a laxity and complacency verging on contempt.

This latest breach has been reported to the ICO last week, but the website is still accessible. No doubt the Information Commissioner, in due course, will again censure the council, and perhaps another fine will be presented to residents. Junior members of staff will be held responsible, and the senior officers paid to oversee the proper management of this information will carry on as usual.

In the meanwhile, if you have made a FOI request to Barnet Council in the last few years, (or work for the council) - you might want to check to make sure your details are not being displayed.

Oh, and now nip across to Mr Mustard's blog, as he may well have something to say on the subject too ...   http://lbbspending.blogspot.co.uk/

Mrs Angry noted yesterday that the disclosure log was still full of unredacted data, and decided that, tempting thought it is to leave the council's latest data breach in place until the overburdened ICO deals with the complaint, it was not fair to some of the more vulnerable residents to continue to have their personal information displayed for everyone to view. The CEO and Tooting Twister have therefore been alerted to the breach, and now the log is no longer accessible. Let's see how long it takes them to go through all the FOIs, and weed out the ones  that should never have been published, shall we?

Do you know, Mrs Angry is getting rather tired of running Barnet Council, and doing the job of senior officers on their behalf, as a long term interim but unpaid consultant.