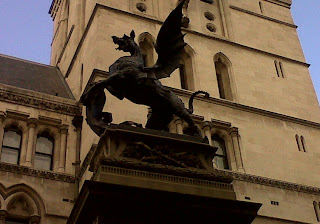 So, since becoming a dedicated blogger, Mrs Angry has, of necessity, developed an entire range of new skills that she would not previously have had need of: she has acquired an expertise in investigative journalism, audit, accounting, procurement, public sector governance, and now, the latest area of specialism, you see, is in the law. Yes, yes: obviously, Freedom of Information, Data Protection, Judicial Review, but now look - a deep immersion in the laws of libel.

Always a useful area of knowledge, libel law, of course, and one studied many years ago, courtesy of the National Council for the Training of Journalists, but frankly, until recently, like Mrs Angry's teeline, rather unpractised in recent years. Still, the last three days in court, observing the #daftarrest trial involving Welsh blogger @Caebrwyn and the Chief Executive of Carmarthenshire County Council, Mark James, have served as a useful refresher course in the subject.

Today in Court 14, the Royal Courts of Justice, in the company of Judge Tugendhat, we spent several long hours listening to representatives of both Caebrwyn -Jacqui Thompson,  and Mr James, as they debated with his Lordship the finer points of the legal evidence that may or may not be included as part of the trial, and the pleas therein, and their grounds in law.

Frankly, most of these discussions were so abstruse that the arguments were almost impossible to follow.

Yesterday we had witnessed hours of questioning of Jacqui Thompson on matters relating to Mr James' counter claim of libel, but today much of the debate focused on the definition of the plea in regard to her charge that remarks about her left by him on another blogger's post were defamatory.

The morning's argument was largely focused, however, on the question of witnesses that Mrs Thompson's legal team wished to call to give evidence, and the relevance, or not, of their contributions. One of these was eventually dismissed by the judge, but two were called to the witness stand. The first of these was Martin Milan, otherwise known as the 'Mad Axeman' blogger, on whose blog Mr James had left certain comments about Mrs Thompson, which now form the basis of her libel action.

Mr Milan gave evidence today about his interest in the story of Jacqui's arrest. He said that he felt she had been treated unfairly, and wrote about the incident, then asked Mr James to respond to several points. When he did so, the nature of the remarks made caused him to ask Mr James if he really wanted them to be published. He thought that the response to his specific questions by the Chief Executive were 'vague', and that he was also 'attacking Mrs Thompson'.

Mr Milan was asked about tweeted comments he had made to Mrs Thompson, including one that stated 'we can tick Gaddafi off the to do list, next Mark James'. Mr Milan explained that this was a 'flippant remark' but meaning that people seen as despots should be deprived of power.

Also called to the witness stand was the independent Carmarthenshire County councillor Sian Caiach, who had submitted a long statement supporting Jacqui Thompson and endorsing her view of the lack of transparency and accountability in the administration run by Mark James.

Rather disappointingly, but perhaps not entirely surprisingly, Mr Speker, acting on behalf of Mr James, chose not to ask any questions at all challenging the statement of Councillor Caiach, and she stepped down without giving any further evidence.

There now followed more lengthy debate - legal argument and submissions, between the judge, Ms Michalos for Mrs Thompson, and Mr Speker for Mr James, regarding the nature of the pleas relating to his alleged libel of Mrs Thompson. For a lay person, these arguments were very difficult to follow, and we sat in court bemused by what seemed like an endless number of variations on the theme of what may or may not constitute a plea of 'malice'.

Reckless indifference, improper, dishonest, falsity, honest comment, wilful blindness ... if someone knew, or ought to know ... back and forth the arguments came and went.

Under the neo-gothic, vaulted ceiling of the oak panelled courtroom, splendidly furnished with arched windows, through which the light streams filtered by a stencilled tracery of leaded windows, time passed very slowly, measured by the dutiful Victorian mechanism of a large wall mounted clock that has been marking the course of justice, administered by a long succession of judges, since 1882. At times, frankly,  it felt as if we had been sitting in the courtroom since 1882.

Eventually, though, Mr Speker had heard enough. He thought that despite his learned friend's 'prolix pleading', we were no clearer as to the merits of her arguments, and he wanted the judge to strike out the plea of malice. The judge, however, would not be hurried, and decided that his decision will wait until Monday morning.

Before arriving at court this morning, Mrs Angry had tweeted her astonishment at the apparent lack of interest by the press in what was, what it, a case of such importance to anyone working in the media, whether mainstream or social, traditional print or broadcast journalist, or blogger.

And in the last 24 hours, interest in this story is growing rapidly: thousands of hits on the two previous posts, including repeated visits from three major news channels, and several national papers. An agency reporter was in court supplying copy for several papers,a journalist from a national paper, and a representative of a public scrutiny group was also present. Following FOI expert and journalist Heather Brooke's attendance in the last two days, the New Statesman's legal blogger David Allen Green, who wrote about the arrest of Jacqui Thompson last year, came by to see how the case was progressing.

The issues which this case touches on are wide ranging and hugely significant: the matter of free speech, and the freedom of expression. The right to challenge those in power and hold them to account. The right to attend a public council meeting in a public place and film or otherwise document the actions of our elected representatives, and to scrutinise their actions as a right, without fear of intimidation. The extent and limitations of acceptable comment and the as yet undefined boundaries of citizen journalism, a grassroots movement flourishing as traditional print-based media watches its life ebb away. And this case, the story of one brave woman from rural Wales, who dared to stand up to the previously unchallenged authority of her local council, will help to define the limitations and responsibilities of those rights.

How ironic that this case, dealing with the brave new world of blogging, an aspect of twenty first century media that Leveson decided to ignore, is being judged just along the road from Fleet Street, graveyard of the old world order of print-based journalism, on the edge of which, looking towards the Royal Courts of Justice, offering a suitable welcome for the citizen journalist from Carmarthenshire, a statue of a dragon stands poised, wings outstretched, ready to pounce.

It's going to be an interesting week.

The case resumes on Monday.

Thank you for your reporting of this case.

Thank you so much for keeping us all informed, especially as we are not getting it from the wider media. I have been following on Twitter each day as one whose had to fight for justice against this despotic council,and won, and am extremely interested in this case. This case has huge implications for bloggers who are in some cases the only source of vital information on how are councils are being run, or not!; but also in time could affect the freedom of the press. Thank goodness they are are now taking an interest.

Yes, the rise of blogging in this context has really only occurred in the absence of any real challenge from mainstream media. There is a lack of scrutiny of local government internally and from the media: so citizens are doing it for themselves. Local newspapers really have only themselves to blame for being lazy, uncritical and too slow to adapt to the changing world of social media. Localism is meant to give more control of the democratic process to residents of a community: all it does is concentrate power in the hands of a largely unaccountable executive, and take away the few external processes that are meant to safeguard us from corruption, incompetence and unreasonable behaviour by elected members. The Audit Commission is going, the Standards regime has gone, consultation in many authorities is a travesty, the Ombudsman process is a waste of time, and the close familiarity between private sector service providers and local government is far too cosy. It's no wonder citizens are becoming frustrated and taking to investigating and writing about their own experiences, and it is hardly a surprise that many councils are resorting to trying to silence their critics.

An article in the Guardian concerning whistleblowing and the Public Interest Disclosure Act 1998 might be of interest to readers of your blog. It contains my contribution to an article by them on Whistleblowing, and my treatment by my former employers, Carmarthenshire County Council.