A Peculiar Evil: the silencing of opinion, in Broken Barnet

“The peculiar evil of silencing the expression of an opinion is that it is robbing the human race; posterity as well as the existing generation; those who dissent from the opinion, still more than those who hold it. If the opinion is right, they are deprived of the opportunity of exchanging error for truth: if wrong, they lose, what is almost as great a benefit, the clearer perception and livelier impression of truth, produced by its collision with error.” 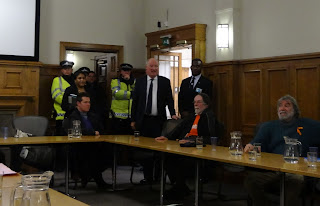 
Last week saw a three day hearing at the Royal Courts of Justice of a Judicial Review of the £1 billion One Barnet programme of privatisation. This wholescale act of outsourcing will, if allowed to proceed, pass the majority of our council services into the hands of Crapita, so that they may use them for their profiteering pleasure for the next ten years, maybe fifteen years.

During the hearing, and in advance of any judgement, the court was told by the counsel for resident Maria Nash that there was evidence of Barnet Council's disregard for the process of consultation over the outsourcing proposals, and the judge several times expressed his bafflement overthe authority's apparent refusal to undertake any real consideration of residents' opinions.

We know that as well as failing actively to consult residents during the tender process which prepared the way for the approval of the Crapita deal, Barnet acted to stifle any existing opportunity for public criticism of the plans, either by elected members or members of the public.

The One Barnet scrutiny committee was abolished, and the council's own constitution was amended so as to minimise the engagement of non executive councillors in meetings, and, worse still, to silence any dissent in the local residents forums, by forbidding the discussion of any council policy at such events.

Policy, in Broken Barnet, is sacred. It is the decisions of our Tory masters, or at least the senior officers employed by our Tory masters, made holy writ, and any challenge of these decisions is One Barnet heresy, and must be silenced. As One Barnet slowly, shyly emerged from the cover of Futureshape and the whopping £1 billion privatisation programme was revealed to the world, the imposition of silence became more of an imperative than ever before. The allocation of a billion pounds worth of business requires an absence of informed challenge, of course.

You might think that the revelation of such ignominous behaviour, as detailed in the case presented to the High Court might have shamed our Tory councillors, teetering as they are on the brink of unprecedented disaster at next year's local elections, into a sense of foreboding, and a desire to make good their mistakes.

No. This is Broken Barnet, after all.

The Tory councillors think that whatever they do, they will be returned to office in 2014, carried on the shoulders of grateful constituents, delighted by the four long years of their contemptuous, incompetent administration, and thanking them for having sold us and our public services into bondage to Crapita.

And indeed our elected representatives think their strategy of the last three years has been so successful, all that is needed for things to continue as they are is, well: more of the same.

Having shut down all meaningful debate in the council chamber, and silenced their residents in their own forums, tonight at the Constitution, Ethics and Probity Committee, our Tory councillors are proposing to go one step further.

As Mr Reasonable reports in his blog here:

Now just to be clear this new rule would have prevented any questioning on the NSCSO contract at the Business Overview & Scrutiny Committee Meeting on 29 November - a topic on which 63 public questions were submitted. Every single one of those 63 questions would be ruled invalid under the new rules ..."

Barnet's ruling junta is now seeking to remove the right of members of the public to submit questions to council meetings and in addition, new rules are being introduced in regard to time limits for questions to Residents Forums, where we are anyway only allowed to raise isssues of 'public works'. This limitation, combined with the fact that Barnet no longer informs residents by email or indeed by any other reasonable means when these Forums take place - at 6pm, when most inconvenient for everyone - will inevitably lead to fewer and more 'manageable' questions for our council.

What possible justification can there be, at a time when Eric Pickles and the Coalition government claim to be such staunch supporters of local accountability, to act to prevent residents from holding their elected representatives to account? There is none, of course, but that has not stopped Tory leader Richard Cornelius from trying to defend this latest flagrant obstruction of the democratic process: in the local Times he claims -

“The change is merely about ending a situation whereby scrutiny committee chairmen are being asked questions they are not in a position to answer ..."

In other words, the Chair of a Scrutiny committee may not be advised by residents of issues which he on their behalf should be raising with his colleagues. This is outrageous.

Furthermore, Cornelius, floundering about as he always does when marked as the focus of criticism ridiculously seeks to deflect the blame for the proposals to the Labour group leader, who is of course away and not here to defend herself from the accusation that she has in some way endorsed the plans merely by being a member of a cross party working group that clearly is controlled by the Tories.

Here is the heart of the problem we have in Broken Barnet: an incompetent, arrogant, self serving Tory administration that defies its own party's commitment to the principles of localism, and has no understanding of the most basic principle of democracy, and that their authority is only placed with them on our behalf, that we the residents and tax payers of this borough should be informed and consulted on every major issue and policy decision that comes before the council. If they think that, after all we have said and done in the last three years, we are going to sit back and allow these town hall tyrants to trample upon our democratic rights any longer, they are very gravely mistaken.
Posted by Mrs Angry at Thursday, March 28, 2013

Only 405 days to go to a day when the voters cannot be silenced.