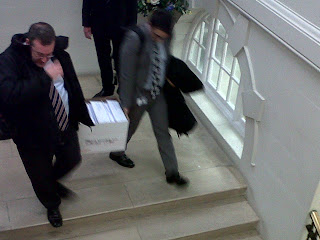 The 8,000 page Capita contract - or half of it - is carried out of the Town Hall

Last night I attended the scrutiny committee which met to discuss the recommendation by officers that Barnet should accept the bid from Capita for a ten year contract to run a substantial proportion of our council services.

As you will know, there were more that sixty questions tabled from members of the public in relation to these proposals. These questions were wide ranging in scope and detail and in fact performed the process of scrutiny rather more effectively than any efforts made by your colleagues on this committee over the last two years.

It became perfectly clear last night from the nature of the questions posed by you, the elected members and representatives of the Conservative group, that you have absolutely no idea of the full significance of the programme you intend to endorse, and indeed have only just begun to raise questions which, if you have been doing your job properly, you would have asked at the very beginning of the competitive dialogue, not now, at this hopelessly late point, when we are teetering on the brink of disaster.

What do you think the role of scrutiny is? Councillor Rayner asked this question, last night. Should you not have defined this role rather earlier in the process? Whatever it is, you have failed in your duty to perform this function, and in this failure you have betrayed the best interests of the residents of this borough.

You will have noticed last night that the senior officers of the council who have, to use Councillor Coleman's memorable comparison, driven the juggernaut that is One Barnet, sat complacently listening to all the last minute concerns which were raised, with no sense of alarm. This is because they know you have been driven like lambs to the slaughter, straight into the abbatoir, and you have allowed yourselves to be completely duped by the promises of consultants, senior management, and of course the encouraging words of the outsourcing companies.

Councillor Rayner made the most astonishing comment last night, taking my point about the millions of pounds that have been spent on one consultancy alone, and remarking that he thought it was money well spent. If you really believe that paying half a million pounds a month to a company facilitating the implementation of a scheme whose premise is allegedly to save millions of pounds, but which, as many other similar projects have shown, is highly unlikely to deliver the promises it makes, then you really are irredeemably stupid.

Councillor Thomas made a lot of outrageous claims last night, speaking very quickly, possibly in the hope that you would not have time to listen to what he was saying, and query the veracity of his arguments. He referred in positive terms, for example, to Capita partnerships in Birmingham and Southampton. When Councillor Mittra invited him to expand upon his endorsement of the Birmingham scheme, he was unable - or reluctant - to do so. Perhaps this is why, and what he did not tell you:

In regards to Southampton: please look at this council report, where you will find the following observations:

"... performance in Capita Property Services was poor and client satisfaction was below the mean.”
During the financial year 2010/2011 the number and range of issues that arose between service departments and Capita Property Services increased.
A significant number of these were escalated within the dispute resolution procedure to the highest levels within the partnership.


When asked why there had been no in house comparator commissioned as part of the outsourcing programme, Councillor Robert Rams tried to persuade us that indeed there had been one, and referred us all to what was in fact the original options appraisal, which ruled out this possibility and refused to include it as an alternative to private sector partnership.

This means, in simple terms, that you have never been given the choice of reviewing the way in which you currently run council services and finding ways of making it more efficient.

Effectively Councillor Rams and his cabinet colleagues are saying that the Conservative councillors have made a mess of running the council, and are incapable of making improvements, so we must invite a private company to come along and make profit out of your incompetence.

I refer you again to the example of procurement which, Councillor Thomas glibly asserted last night, can be run so much better by Capita.

Ask yourselves who was responsible for allowing such a monumental failure in the management of procurement and contracts, and why they have retained their positions while ordinary council employees now face the loss of their jobs.

If senior management had properly run the procurement and contractual obligations of the authority, countless millions of pounds of our money would not have been wasted, and even now, these savings can be made by the authority without handing over the business - and profits - to Capita.

One of the surreal features of last night's meeting was the inordinate amount of time that was spent discussing how services may be brought back in house in ten years time - or earlier, when the fundamental flaws of this contract become apparent.

You have a choice now: keep quiet, let the Cabinet agree this disastrous proposal - or fight back.

Here is your last chance to redeem yourselves in the eyes of the residents of this borough.
Don't let us down.
Mrs Angry 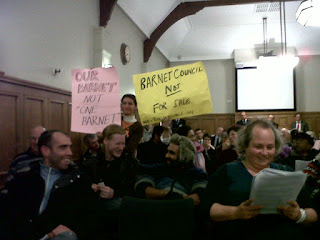 There is not much point in reporting the performance that was enacted in place of what is meant to be scrutiny by our elected members at this meeting.

Public question time was the usual farce: carefully focused questions answered evasively in the written responses, followed by supplementary questions at the table rebuffed by the Chair, batted away like annoying bluebottles at a barbecue.

Mrs Angry's questions fared not much better, although she managed to have some fun with the council officers present, in particular Mr Andrew 'Black Hole' Travers, who shifted uncomfortably in his seat when asked about the discrepancy between the value of the Capita contract, as stated in the OJEU in June 2011, and in the information given to the press once the Capita bid was chosen.

Mrs Angry, always keen to laugh at her own jokes, worked up a tease about money  disappearing into a black hole:


... wasted, wasted, Mrs Angry ... Travers shuffled about, and fumbled around with an iinteresting  explanation, ie £320 million for ten years, £750 million for fifteen ... 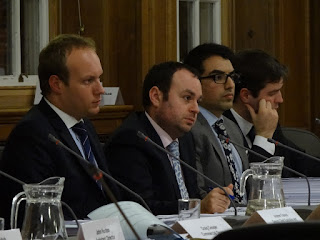 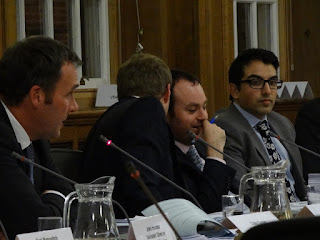 A further question about mitigating the risk of conflict of interest regarding senior officers who may now leave and take a post with one of the companies involved in the competitive dialogue resulted in more shuffling from Mr Travers, and Captain Craig Cooper, both of whom sat throughout the meeting like Laurel and Hardy, making rather comical faces but otherwise entirely unfazed by the process, as of course once public question time had finished, there was nothing to fear from the toothless scrutiny of the committee.

There was no coherent response regarding mitigation of this risk, just a stumbling, make it up as you go reply from Travers saying any officer giving in notice would be expected, or required (it wasn't clear which) to tell them what he or she was doing so they could removed him from the dialogue. Mmm.

The last question from Mrs Angry was regarding the role of councillors, to which the written response had been that elected members always made the decisions. LOL. In which case, asked Mrs Angry, innocently, how did you explain the curious case of the Joint Venture, now proposed -( or is it?) - for the next package of outsourced services, a departure from policy which was decided by senior officers before members had heard anything about it?

The Chair, Anthony Finn, interrupted Mrs Angry at this point, and in typical Barnet Tory chauvinist style, tried to suggest to her, as a silly woman,  that she should ask a better question, one of his, which he thought was an improvement on hers. It was not, and Mrs Angry was hard pressed to find the words to thank Cllr Finn for his attempt to formulate her question, but stated she could probably manage on her own.

Finn later made a snide, patronising remark to Cllr Alison Moore, leader of the Labour group, that she should speak up, as, he sniggered, 'some people' wanted to hear her - following in the wake of a charming suggestion by Cllr John Marshall to residents complaining that they could not hear him speak that they should 'clean their ears out'. This, citizens, is how our Tory councillors extend respect to their opposition colleagues and electors. 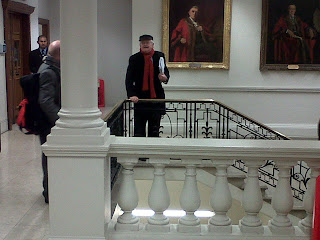 Oh, and talking of the Director of Commerce, Craig Cooper: a little bird tells Mrs Angry that Cap'n Cooper is indeed ex army (army procurement!), from a military family, and in fact the great, great nephew of General Allenby - yes, you know: famous for, amongst other things, his conduct during the retreat from Mons, in the first world war.

During the meeting Mrs Angry found herself what the General would have made of his descendent's tactics, as seen throughout the theatre of war that is the One Barnet campaign.

Perhaps Allenby might have suggested a tactical retreat, to save the greater part of the campaign.

Because interestingly, in the course of an appearance on the BBC's Politics Show today, (Sunday), Tory leader Richard Cornelius made a remark which appeared to imply a less than certain commitment to the One Barnet programme, as we know it, in particular the second package. Referring constantly to the outsourcing programme relating to only 'back office' services, he also stated that planning, included in the DRS bundle, only might be going to be outsourced. Really?

Are the Tories getting cold feet over the second dialogue process, the one which senior management and their consultants are so keen to turn into an even more risky Joint Venture?

Does this apparent uncertainty have any connection with the unexpected departure of CEO Nick Walkley?

Are the Tory cabinet members going to sacrifice DRS as a sop to their mutinous backbenchers, in exchange for pushing ahead with the larger NSCSO bundle, which Cornelius would probably love to dump, but feels too much face (and money on consultancy fees) would be lost if they did?

Or is the whole thing doomed anyway, and they know it?
Posted by Mrs Angry at Friday, November 30, 2012

Very good Mrs. A. I'm puzzled though by the Crapita brilliant satisfaction results presented by Cllr J. Thomas. Since Crapita serves multiple councils with the same resources, then "below the mean" satisfaction as in Southampton automatically applies to all? unless of course, Crapita produced the survey...
Also, i think you should comment on the barrage of insults by that bloody cllr on the council workers, two days after we were told that barnet primary eduction is 2nd to none.