Here is a lovely picture of the President and members of the Old Millhillians club committee: can you spot a Mr Noyan Nihat, of MetPro and Evolution Emergency Response? Mr Nihat has some nice footage of Mrs Angry, and now Mrs Angry has a nice photo of him.

Why did Eric Pickles, Secretary of State for Communities and Local Government, use this speech to the CIPFA conference to lavish praise on the Famous Five Barnet bloggers, and deliver an unprecedented humiliation to the Conservative administration whose incompetence they exposed? 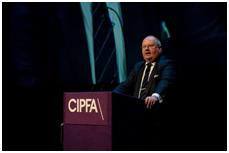 Which diminutive Tory MP for Finchley and Golders Green has a blushing admirer called Mrs T, and has a marvellous blog full of fitness tips and recipes for baked bean suppers, as well as some very surprising local video clips appealing to a wide range of interests? Why does he borrow Sooty's campervan to hold his constituency surgeries outside Tescos in Finchley Central? 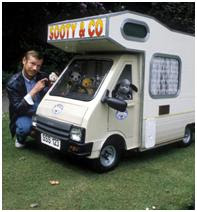 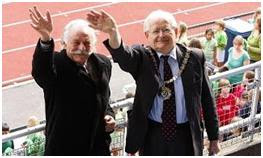 Smooth tongued lothario Councillor John Hart (left) has many talents to recommend him, (diplomacy is not one of them), and a thrilling handlebar moustache, but on the other hand, Councillor John Marshall is a Grade 1* listed building, an accomplished man about town, and notable lady charmer. They are both desperately in love with Mrs Angry, of course, and keep squabbling over her favours: should she ask them to settle the argument by:

a. a bare knuckle fight to the death in Victoria Park, before Brian Coleman hires it out to Crapita for corporate entertainment, or

b. writing a musical composition in her honour, sponsored by a grant of £1,000 from the borough's civic events fund, to be performed by massed ensembles and sobbing schoolchildren at the Reverend Adrian Benjamin's All Saints Arts Centre?

Mrs Angry HATES New Year's Eve, loathes the thought of the approaching months of gloomy old January, February, and March, and will be going to bed very early tomorrow night with a pillow over her head and a sense of deep foreboding, but she would like to wish all her readers and blogging friends a very Happy 2012.
Posted by Mrs Angry at Thursday, December 29, 2011

Corporate Entertainment said...
This comment has been removed by a blog administrator.
19 January 2012 at 15:33