What I Did on My Holiday 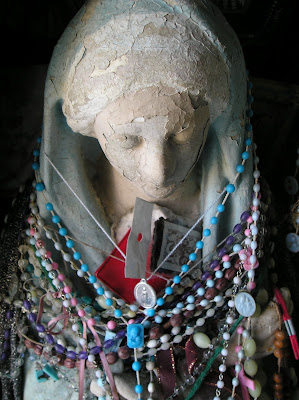 Well, I didn't mean to take Mrs Angry on holiday with me, but she slipped into my suitcase anyway, and I think she enjoyed the break. Where were we? In the wild west of Ireland, in beautiful County Clare, our ancestral heartland, in fact, deep in the heart of Father Ted country. Yes, we did see the Craggy Island parochial house, in fact Mrs Angry nipped out of the car and shamelessly gawped through the familiar gates, and may well have been mistaken by the locals for Mrs Doyle. Ah, go on, go on: you know what I mean.

Now, see, wherever I go on my travels, I always make a point of buying and reading the local papers. Nothing is more enlightening, nor better serves as a corrective to the tedious obsessions of our own local news stories. And what a refreshing contrast the news in the local papers in Clare made to the nasty, grubby little stories we read here in Broken Barnet.

No stories about grasping councillors giving themselves whopping great pay hikes, and then being shamed into giving them back. No stories about 83 year old pensioners being threatened with eviction from the only home they have known for 74 years. Oh: hold on though : eviction is an emotive word in County Clare, as I will explain later.

In true Father Ted fashion, the hot news in Clare was all about Bishop Willie Walsh and his imminent retirement. Indeed there is hardly a page in any of the local papers which does not carry a story and photograph of Bishop Willie. Except for the story 'Simply the Vest', about Sister Gabrielle Murphy, who is lovingly sewing a new set of vestments for the new boy, Bishop elect O'Reilly. Then we have the half page regular column by Fr Kevin McNamara, with useful advice such as 'What a blessing a sense of humour is ... but we must learn to laugh with people, and not at them.' Bless me, Father: I just can't do it. Sure that'll be 560 Hail Marys, two thousand Our Fathers, and five more minutes in hell, then, Mrs Angry. Fair enough, so.

Apart from the stranglehold that the local clergy has on the news, and lots of cheery reports of local events which all end with the inevitable concusion that everything went very well, and everyone had a very nice time, there was one horrifying story which made the BP global ecological disaster look small : "Clare Coast falls foul of Floating Butter Containers."

I wish I was making that up, really I do, but it's true. There were fears of 'a major environmental problem' after hundreds of the containers have been washed ashore from a damaged cargo ship. Kerrymaid, Buttersoft, and even Sainsbury's Butterlicious. The paper states ominously that it is not yet clear if the containers had any butter in them, or were empty when they entered the water. The worry of it all is obvious from statements by the County Council, who are keen to reassure the people that they are investigating the matter in full accordance with their duties under the Waste Management Act. Phew.

The only mention of local politics in the press was a report that the leader of Clare County Council was very concerned that the views of the people of Clare were not being given sufficient consideration, and that he was therefore resolved to launch a major survey to see what people thought of the council's service, and if in fact the authority could do anything to improve its performance. Really. Yes, I know: I had to read this article twice, the underlying concept of respect for the views of the electorate being so alien to the selfserving administration currently messing with the lives of the long suffering residents of Broken Barnet, wouldn't you agree?

Evictions, though ... as in many areas in the Celtic fringe, the past - in the West of Ireland - often appears as close and as tangible as the present. You cannot escape the deep emotions still felt about the historical injustices perpetrated in this country, and the sense of loss and anger felt about the death and dispersal caused by the Famine, over a century and a half ago. In the way of many traumatic events, those who lived through these times and survived were reluctant to speak of it, and it is only relatively recently that a real acknowledgment and reassessment has been made of what happened.

What happened, in a nutshell, if you don't know, is that when the potato crops failed, the British government refused to compromise its economic policy and intervene to help the Irish people to stay alive. No mercy was shown to the starving population: even those destitute enough to qualify for 'relief' - including the elderly and children - were obliged to slave away, half dead already, at pointless labouring jobs in order to pay for paltry supplies of inedible corn, or a watery bowl of soup. When tenants were unable to pay the rent to their landlords, many simply threw them out, knocked the roof off their pitiful cabins and let them die in the fields. In Clare, the Famine was particularly hard, and evictions common. The British government saw the crisis not as a human tragedy, but as an act of God, an inevitable visitation on a feckless, ignorant Catholic underclass, who must be left to suffer the consequences.

Of course, if only they had been able to demonstrate 'a history of positive contribution to their community' in Barnet-Futureshape style, things might have been different, I am sure Lynne Hillan and co would agree. But sadly, in the absence of morally worthy lifestyles, they had to be taught by their betters to become responsible for their own needs. If they starved, well, they had only themselves to blame.

Until recently, I would bet, most people in this area, and beyond, only associated the word eviction with the Big Brother household: now, here in Broken Barnet, thanks to the Big Brother administration of Lynne Hillan's council, this word has now been brought back into everyday conversation by the appalling story of the 83 year old pensioner Edward Meakins, who had been threatened with being thrown out of his home of seventy four years by heartless council officials. Why? Because here in Barnet the Tory administration adheres to the same faux morality and 'principles' of nineteenth century government; laissez faire policies, market forces, the best housing reserved for the deserving poor, the morally worthy - and an abandonment of the responsibility of the state for the support of those without means. A council tenant is allowed no security, no right to occupation, even after 74 years, and two generations of one family. Tenancy is the gift of the council, no longer the right of the individual. Time is marching backwards, in other words, in Broken Barnet.


Since I've been away, Barnet Council has backed down over its proposal to throw Mr Meakins out of his home. Make no mistake about it, this decision is purely because of the furious outcry his case provoked, both locally and nationally, and for no other reason. Just as in the case of the allowance rise, and the terrible public reaction that ensued, this was only a tactical retreat. In other words, they got found out, and had to resort to damage limitation. The underlying political policies remain, and when no one is looking, far worse things will be sanctioned. The attitude of this administration is no different to the English landowners and government still remembered with such bitterness and contempt in Ireland: an attitude of callous indifference to the vulnerabilities of the disadvantaged; a desire for personal gain at the expense of others justified by a warped sense of moral superiority, and indefensible political and social policies rigidly enforced under the pretext of financial necessity. How very shameful.

While we were in Clare, we went on a long, long trek into the deep wilderness of bogs and mountain pasture where my some of my family once farmed a few hundred acres, for generations, until the Famine. It was a salutory experience, and surprisingly emotional, the past again as real, or more real, than the present. Peering through the cracked windows of abandoned farmhouses and breathing the musty air of rooms which have lain empty for decades, made it easy to imagine the presence of the departed. My family were comparatively fortunate; they had resources sufficient to escape and survive. A million other Irish people did not, and died of starvation or disease.

The place where we were staying in Clare looked down on farmland and fields stretching down to the sea. Also in front of us, I noticed, was the ruined, remains of a large house, collapsed in on itself a long, long time ago. With neat irony, it turned out that this was the former residence of the O'Briens, the wealthy landowners who had once owned my family's farm, and several thousand other acres in the area. One evening, therefore, I ignored the no trespassing signs and sneaked up through the fields to see what was left of this house: only the walls, in fact, with a modern bungalow sat squat in the middle of the overgrown ruins in a rather satisfyingly impertinent Irish way. And so, Mr O'Brien, I wondered, now how does it feel to have no roof over your head?

Sometimes natural justice does prevail, and history has the last word. Wonder where the heartless, grasping landlords here in Broken Barnet will be in a few years' time, when their house has tumbled down?
Posted by Mrs Angry at Saturday, August 28, 2010

As you can read on "Barnet Bugle", Lynne Hillan is STILL giving all the committee chairmen (not in the cabinet) pay increases of over 50%.

And all of them have a vote in the upcoming leadership elections.

Lynne Hillan is standing in the upcoming leadership elections.

baarnett, you are too hard on these chaps: some of them even turn up occasionally for their meetings! It was a shame that the chair of the residents' forum couldn't make it when I attended, but I am sure that he was far too busy, and I do hope that he was paid to attend anyway, don't you? And just because their leader wants to reward their hard work with more pocket money, well nothing wrong with that, is there? Perfectly understandable. I am sure that they will display their usual courage and integrity in the leadership elections, and vote for the best candidate. Or the other one.

Ireland had absentee Landlords living the high life in London off their tenants rents; pity Barnet doesn't have absentee councillors, then we could sack them perchance or is that a flight of fancy too far from reality.....

ainelivia: believe it or not, there have been absentee Tory councillors, during the recent reign of former leader Mike Freer: and they were apparently still entitled to claim some payments even though living abroad ...