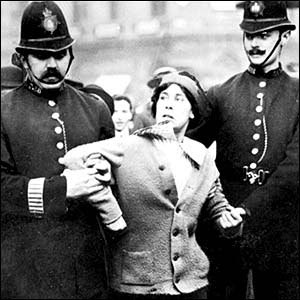 Yes, it's true. Someone tell BBC Wales. And the New Statesman. Am I trending on twitter yet?

In yet another example of Town Hall tyranny, in the interval between two council meetings tonight at the Broken Barnet Town Hall, Mrs Angry was this evening approached by Barnet's Chief Executive, Nick Walkley, after he had been whispering conspiratorially in the corner with Mr Craig Cooper and other senior officers. Cheekily, right in front of two Labour councillors who were engaging her in conversation, the following suggestion was made:

Nick Walkley: Can't you go and gossip somewhere else?

Well, ok - he was joking. Probably.

Mrs Angry: Ha: I might ask the same of you, Mr Walkley, seeing as you're in the public gallery ...

Mrs Angry moves towards the door.

Mr Walkley, with a resigned expression: I don't want to read tomorrow that I threw you out of the council chamber ...

Please don't put ideas into my head, Mr Walkley: it's not funny, and it's not clever.

Tonight's 'extraordinary' council meeting saw the anointing of Richard Cornelius as the new Leader of Barnet Council, a fairly low key event, as it happened, compared to the recent absurd pantomime over the installation of the new Mayor.

Cornelius had two speeches made in honour of his new nomination, a nice enough one from rival contender Mark Shooter, and a silly one from our favourite councillor, Brian Coleman. Brian looked rather sulky and out of sorts this evening, in fact, as if he were suffering from mild indigestion. Or jealousy. How it must infuriate him that he has never been leader of Barnet. He just about pulled himself together and made a speech proposing Cornelius for the post. He assured us that Richard is a firm admirer of Mrs Thatcher -good, good, and that he would appeal to 'Mr And Mrs Average Suburban Barnet Residents' - oh. Really? Obviously I don't quite fit into that category, so I wouldn't know. Cornelius is rather different to Brian then, who only appeals to - well, who, exactly? This is a mystery, frankly, ladies and gentlemen, isn't it?

While I was musing on this thought, Brian carried on in one of his two star rants, (no spitting, just peevish), and before we knew it I caught the words '... and DODGY BLOGGERS ...' Mrs Angry sat up: the councillors of Broken Barnet tittered - or winked in Mrs Angry's direction. Well, at least he was too much of a gentleman to call me a one handed blogger, but still, it hurts, Brian, you know. Was it something I said? I would certainly never stoop to calling any Tory councillors 'dodgy', even though most of them undoubtedly are.

He carried on: bla bla bla strong firm Conservative leadership bla bla bla same wavelength in tune council gobbledegook bla bla bla and then, suddenly, he paused for dramatic effect. Like any old luvvie actor he gestured in the direction of the new leader:

'Cometh the hour, cometh the man!'

Mrs Angry's cat caught a bird today for the first time, after four years of trying. As he is, rather in the mold of the average Barnet Tory councillor, incredibly dim, greedy and lazy, and spends most of the time sleeping under a bush, or hiding in my wardrobe (just like Councillor Marshall), this was a real surprise. To him, as well as to me. He came running to the back door with the poor baby bird in his mouth, and dropped it with a look of panic, as if the reality of success was not all it was cracked up to be, and he wanted it taken away. Tonight I thought I detected a similar feeling of discomfort on the face of the new leader. Let's see how long he lasts, eh?

After the coronation came the Cabinet meeting. Not much change, and yes, look: Andrew Harper is still holding on to his portfolio.

Who are the new boys? Well, Councillor David Longstaffe - you know, the Actor (beige man in Ikea, small part in Mary Whitehouse?) has found a major role at last as Cabinet member for Safety and Resident Engagement.

Oh, and Tom Davey, the guy who works for a tobacco company, a real job - not in one of those public sector posts he so disapproves of - the Councillor who did such sterling work on the constitutional 'reforms', has been given the responsibility of housing. God help us all.

The newly arranged Cabinet sat primly at the table and looked like butter would not melt in their little Tory mouths, while, goodness me, a very interesting report was laid before them. What was it about? Safeguarding. Protecting children and vulnerable adults from harm.

This is, said Mr Cornelius, something they take very seriously. Mmm.

Take a look at item 9.5.4: Safer Procurement. Aha. It says 'questions have recently been raised' about the adequacy of safeguarding measures in place when services are procured.

In fact, at tomorrow night's audit meeting, I am looking forward to reading the answer to my question about the safeguarding measures which were so shamefully, inexcusably ignored over so many years in regard to the use of MetPro, including we are told, in situations where they had contact with children identified at risk, and vulnerable homeless adults in hostels.

These questions, please note, Brian Coleman, were not identified by you or your Tory colleagues at any point, even though a failure to follow proper safeguarding practices can have the most devastating consequences for children and adults to whom the council has the most serious duty of care.

These questions, Councillor Coleman, and the incredible catalogue of incompetence left in the trail of the last two Tory administrations were raised by that group of troublemakers you so despise: the 'dodgy bloggers' of Broken Barnet. Perhaps, in future, you might like to extend a little more respect to the citizen journalists who have done your work for you, unpaid and unacknowledged, and in the face of so much obstruction from so many interested parties. Hmm?

This week Barnet launches its Big Society fund, called 'Innovation Bank'. This marvellous enterprise is to help citizen and community led initiatives, supposedly financed by the deletion of senior officer posts. (In Barnet speak, this means getting rid of staff, by deleting the posts, creating new ones with a different title and filling it with 'interim' people on contracts - on a much higher cost to the taxpayer.) Mrs Angry has submitted a bid to the new fund, on behalf of herself and her fellow citizen journalists:


With my blogging colleagues, I feel that I have been very successful in making a positive contribution to my community, offering a voluntary appraisal and scrutiny process for the performance of our councillors. I would therefore like to apply for a grant in order to sponsor a Barnet bloggers' weekend conference at the Sandbanks Hotel, Poole, a venue I believe already conforms with the stringent risk assessment standards and procurement procedures of the authority.

Haven't heard back yet, for some reason.
Posted by Mrs Angry at Wednesday, June 15, 2011

Fabulous posting as ever. Long may you continue!

And we ( assuming I am included Mrs A being just a feeble man ) can hire Evolution Emergency Response to escort us there with motorcycle outriders - surely the most perfect use of tax payers' money as the Council have already demonstrated. And we won't even need to waste our precious time on boring paperwork - like, oh let me think, a Contract.

Mr M: I thought you might give me a lift on the back of your lambretta?

I offer you an opportunity to redeem yourself, having reneged on your gambling debt in respect of Brian Coleman’s non-candidacy for the leadership contest. I predict that Richard Cornelius will be toppled as leader before the 2014 council elections.

I would have thought by now you would have realised that I am never wrong, and never admit that I was wrong, therefore never honour bets, which I never lose anyway. But FYI, if you read my post properly, you would have seen that I have already raised the strong possibility that Mr Cornelius does not last very long ... please pay more attention, DCMD: too many late nights?

I usually stop reading after the first 20,000 words.