Camarthenshire County Council: no mercy in their means 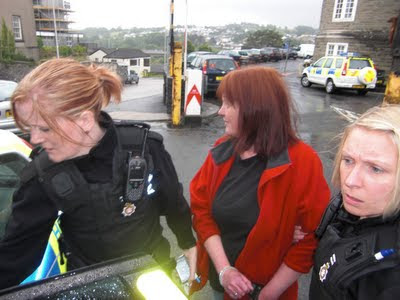 
Blogging is largely a boys' game, and political blogging even more so.

In Barnet we are unusual in that two of our local political blogs are written by women, ie Mrs Angry and Vicki Morris. I don't know why we are so outnumbered in the wider blogosphere: maybe because it is such a competitive, showy offy sort of milieu. If you don't promote yourself and shamelessly nick stuff off other bloggers, you may find yourself sidelined, and women are perhaps too slow to stick up for themselves when that happens. It's kind of like that Fast Show sketch, with the invisible woman ignored by the men, who then repeat what she says, and tell themselves how brilliant they are.

Mrs Angry, fortunately, on the female side, comes from a long line of over opinionated, dedicated show offs & outrageous liars, and is pretty well able to hold her own with the bad boys. But not always. And sometimes she is aware, rather guiltily, of using the novelty factor of being female to her advantage, but this is generally due to an unstoppable urge to be mischievous, rather than a deliberate strategy.

And sometimes being a female citizen journalist can prove to be a distinct disadvantage, attracting perhaps more animosity and unpleasant attention than might normally have been the case. Yes, I'm talking about Caebrwyn now.

Caebrwyn is the blogging name of Jacquie Thompson, a community councillor who writes about the antics of Camarthen County Council. As it happens, she has followed this blog for some time - see her waterlily icon on this page. I take that as a high compliment, in the circumstances.

On Jacqui's blog there is an appropriate quote from Orwell:
'Anyone who challenges the prevailing orthodoxy finds himself silenced with surprising effectiveness'.

On Wednesday this week, Jacquie was present at a meeting of Camarthen County Council, exercising her right, as guaranteed by Mr Eric Pickles, to film the meeting on her phone. Here are her words to describe the mood of the meeting, in which a petition with 1500 signatures was being presented by some very elderly residents who were trying to save their day club from being closed.

"As I arrived an elderly lady was presenting her petition, it was heartfelt and passionate and implored the Council to rethink their plans. Several other Day Club members had also been allowed into the Chamber. Much to their shock, the Chairman, Cllr Ivor Jackson then just moved onto the next agenda item. Cllr Sian Caiach was equally shocked and demanded a debate and consideration of a rethink - she and Cllr Arthur Davies were told to be quiet or leave the Chamber, despite their protestations over the fact that there would be no debate, Chief Executive Mark James, shamefully, decided to only allow the Executive Board Member, Cllr Pat Jones to speak - obviously in support of the Council's plans to close the centre. It was the most outragous display of council 'business' I have seen to date. This was why I was there and why I was filming - people need to know what is going on in that Chamber. That is also why they don't want anyone to record it either ... "

Goodness me, sounds awfully familiar, doesn't it, citizens of Broken Barnet - the attitude of open contempt for petitions, the blatant disregard for the process of consultation?

" I was asked to leave by the Chairman and Mark James, I said that I was not doing anything wrong, it is not against the law nor even in their standing orders (rules for meetings), neither was I disturbing the meeting in any shape or form. Mr James sarcastically asked whether I now had a good photo of him to put on my website. As I didn't leave, Mr James and the Chair called the police and then adjourned the meeting. Unlike my complaint of assault in the Public Gallery where the police took four days to take my statement and several more to speak to the chap concerned, it only took ten minutes today for two police cars and four police officers to appear in the Gallery. I tried to argue my point but was then arrested in the Public Gallery for 'breaching the peace'. I was taken outside the door, handcuffed, searched, my phone taken and marched out to the waiting police cars. I was then taken 30 miles to Llanelli police station where I remained handcuffed for another hour before being 'processed', and put in a cell for another two hours.
By this time I was very disorientated, worried about my young daughter who needed picking up from school, I was cold (the police had taken my jacket and shoes and socks) and distressed. Without a solicitor present, I was then threatened by three police officers who said that if I didn't sign an 'undertaking' not to film/record any more meetings I would be kept in overnight, I am not sure now whether they could even keep me that long. Earlier in the day I had been told that they was looking at the relevant legislation and were 'talking' to the council, it is now clear exactly what was discussed; 'she probably can't be charged with anything so tell her to sign and you'll let her go'. I am now asking my solicitor about the legality of this and regardless of the outcome I will not abide by something I was forced to sign. I will be back.
I was then, eventually, released. I can't quite believe what happened to me for trying to film a public meeting. "

Nor can I. Nor can the thousands of people all over the country who have expressed their outrage over this incident, as it have become publicised throughout the media, the blogosphere, twitter, and the press.

Would Camarthen County Council have picked on anyone but a woman blogger, a middle aged mother, who was only trying to use her phone to film bits of a flipping council meeting, involving her elected representatives, performing the duties with which they have been entrusted and are paid to undertake by the people to whom they are accountable? Did they think she was an easy target?

As for the police: what breach of the peace, exactly, had occurred? Why were they so attentive to the orders of the county council, with no evidence of any law breaking? Mrs Thompson had every right, as a citizen journalist, to attend this meeting and record it in this way. She was neither violent nor disruptive. This is an appalling incident, and I hope that the local police force is held to account for their actions.

Funny, isn't it? In Camarthenshire, you get arrested for openly filming elected councillors in a public meeting. Here in Barnet, the council uses casually employed, unlicensed, non CRB checked blackshirted bouncers to secretly film residents and bloggers at a council meeting, but no arrests are made, and the company carries on in business.

And, oh dear: I wonder if, somewhere in Broken Barnet, a little moustachioed senior council officer is rubbing his hands with glee, checking the number of the local police station, and looking forward to the next council meeting? (MetPro Audit Committee, Thursday 16th June, 6.30pm, Hendon Town Hall).

If so, he might like to remember that here in Broken Barnet, bloggers bite back. Mrs Angry is confident, in fact, that there isn't a police officer in the entire borough who doesn't quake in his boots at the thought of having to detain her for questioning ... well, pack your handcuffs, boys - and those fold up truncheons ... I'll come quietly.

What, other than using the rule of the jackboot to silence those who dare to challenge its county councillors, is Camarthenshire famous for, thinks Mrs Angry? Hmm. Dylan Thomas. You know, Fern Hill: 'Oh as I was young and easy, in the mercy of his means, Time held me green and dying, Though I sang in my chains, like the sea ...'

Respect to Caebrwyn, then: singing in her chains, and revealing the bullies of corporate Britain for what they are: town hall tyrants, lunatics masquerading as the patrons of localism: the enemies of democracy.

‘caebrwyn’ follows my blog as well - not that there is anything to follow any more.

This is a shocking story on many levels. It is a real shame that the Police have allowed themselves to be used for political purposes. Action should be brought against the council’s Chief Executive - having someone arrested without legal cause is not something that should be tolerated in this country.

Not sure there is any action against the Council CE here. Not a sacking offence to CALL the police per se. If there were lies, false testimony or embellishment that would be another matter.

All the focus must be on the police. There remains the widely reported dark obsession with people filming them and in public and I can't help but think this informed their 'police state' action here.

There is a story on the Telegraph web site here.

(There are two Rs in Carmarthen, which makes me confuse it with Caernarfon/Caernarvon/Carnarvon in north Wales.)