Exclusive: the Mayor and the MetPro escort 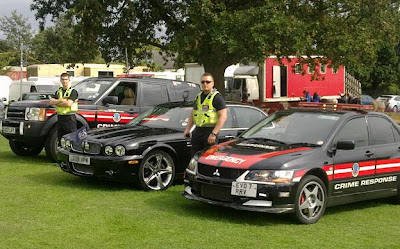 The Tory councillors and senior officers of Broken Barnet would like us all to stop mentioning the cosy relationship which we now know existed between their administration and the MetPro security group for so many years.

They have always attempted to distance themselves from the issue: the councillors maintaining a stony silence, and the senior officers seeking to avoid any direct responsibility for the failures which have allowed this scandalous arrangement to continue for so long.

Mrs Angry can exclusively reveal some new evidence that the relationship between MetPro and our beloved council, the love that now dare not speak its name, was indeed once one of touching intimacy and lasting mutual satisfaction.

Here we have a photo taken at last summer's Friern Barnet show of the happy couple, in a rare public display of affection. See the Mayor's limo, so lovingly tended by our MetPro friends? According to an eye witness who has contacted Mrs Angry, Mayor Anthony Finn was escorted in a MetPro cavalcade into the event, presidential style, sweeping into the grounds, flanked by MetPro vehicles, just like Obama in the bullet proof Beast, on his recent trip to London.

Mayor Finn had come to join his Tory colleague, Councillor Brian Coleman, AM FRSA, who has upset the organisers of the Finchley Carnival with his new charges and unkind remarks about the organisation of the hundred year old event, but is a firm supporter of the Friern show. In fact, according to his declarations at the London Fire Brigade, our Brian is a director of the show's organisational company. This states: 'Friern Barnet Summer Show Limited (25% of the shared capital – no dividends) and Chairman of the Board of Directors (unremunerated)'. Had to look at the LFB register, because of course in the tradition of secrecy we maintain here, Brian's Barnet declarations are one of the opted out listings allowed to our more modest and sensitive councillors.

Councillor Coleman, a devout Methodist, is believed to have read a lesson over the loud speaker during a service at the show, in what must have been a spiritually uplifting moment for the gathered throng, no doubt reminiscent of John Wesley himself addressing a crowd of awe struck followers.

After touring the show, and admiring the grateful citizens' prize marrows and Victoria sponges, Barnet's Mayor Finn left the park in the limousine, again with full protection from MetPro, or as we must call them now, Evolution Emergency Response. Thank goodness for their watchful care: can you imagine what might have happened, readers, if, say, some local oik had thrown an ice cream at the mayoral presence, or shouted a coarse comment in his direction? I do hope those little cameras were switched on, just in case ...

Now, funnily enough, Mrs Angry happens to know that an FOI question was recently put to the council asking for details of this mayoral visit to Friern Show last August. She has seen the (yet again delayed) responses, and she must tell you, citizens, that the council can find no record of the use or presence of MetPro for this official visit. Isn't that odd? In fact, oh dear - naughty, naughty, London Borough of Broken Barnet, the FOI response says this:

Response
The Deputy Mayor and the Mayor attended the Friern Barnet Summer Show on the 21st and 22nd of August respectively. The council did not use the services of any external security companies or individuals (including Metpro) in relation to these visits. Additionally, neither the Mayor nor the Deputy Mayor uses the services of external security providers generally.

Oh. Then either a. the council is - no, it can't be - not telling the truth, or b. MetPro was offering its services voluntarily, and was not paid. Why would that be? Should not such a use of a company's services, whether paid for or not, be declared, in some way, for reasons of yes, transparency, and possible conflict of interest? Or has One Barnet gone down the path of product placement, in its relentless drive for efficiency and better services for less money?

Now someone, somewhere, must have arranged for this escort duty to be coordinated, and checked the timing of arrivals and departure: Mrs Angry has seen copies of the pages of hand written timetabling of the Mayor's movements and duties on the day. These papers include details of very solemn negotiations conducted, at some length, in formal correspondance with worried representatives of the visiting Mayor of Okehampton on whether or not our Mayor would be willing to allow his guest to wear his own municipal bling at the event. He was given the ok, in the end, if you're beside yourself with speculation. Nothing about security arrangements, but then perhaps this would have been a matter for the Met CT team, in consultation with MetPro special services. (Oh look, D: another 100,000 hits ...)

But isn't this a fitting symbol, readers, of the whole scandalous affair: the councillors of Broken Barnet, so engrossed in their own self indulgent, role playing fantasies that they completely fail to see the need to monitor the dangerous liasons, the casual procurements, that their complacency and carelessness has allowed?

The MetPro affair has taken on a totemic value now: it is the marking point of a moment in the history of this Tory admininstration, which will decide whether or not they can redeem themselves from the moral decline of the past few years, and reintroduce some standard of integrity into public life. Tomorrow night's much anticipated audit meeting will be the test: let's see what indication that gives of the direction the new leader is set to follow.
Posted by Mrs Angry at Tuesday, June 14, 2011

If the supply of MetPro was on a voluntary basis, I am sure it had no connection whatsoever to the approximately £1.4 million that the council had paid the company over the last five years, in the complete absence of contracts and transparent financial control.

And I am sure there were proper agreements drawn up for the 'branding' of the London Borough of Barnet, "coming to you courtesy of MetPro Rapid Response Limited - Have the peace of mind that comes with having highly trained and equipped professionals who can deal with a wide variety of emergencies and respond to your home or business 24 hours a day! Now, put your hands together for a big Friern Barnet welcome, because... h-e-r-e-s the Mayor!"

So does Councillor Finn now remember the occasion, now that you have reminded him?

"Oh, THAT was what the big black car ahead, and the big black car behind were all about! And the big, gruff men in yellow padded jackets! Why didn't they tell me? It's funny I wasn't curious at the time, looking back on it, isn't it? Still, I'm sure that the Audit Committee on Thursday night will be able to clarify the whole matter, won't it?"

I'm sure than brother Brian will heed the wise words of the Rev. Professor Emmanuel Asante, when elected recently as Presiding Bishop of the Methodist Church of Ghana.

"I call for transparency, probity and accountability. All members in positions of trust must also endeavour to give transparent and dedicated services to avoid mistrust."

And the Mitsubishi has an illegally spaced numberplate which should read EV 07 RRV. The sad idiots wanted the zero to look like a letter O so that the abbreviation EVO for Evolution was there.

Advance planning for the change of trading name?

So there we are; the safety and security of the Mayor was in the hands of an illegal security guard driving an illegal car.

If they used the performance: 0 to 60mph in 3.9 secs ( average car takes about 10 secs ) and managed to get Cllr Finn escorted home at the top speed of 157mph he might well have remembered. Of course, they didn't exceed 30mph and the true identity of Mr Mustard is the Queen of Sheba.

I think that you know I am the Queen of Sheba, Mr Mustard, and I am just off to another coronation, as it happens ...

Thankfully you are not suggesting that MetPro Rapid Response Limited was trading at the time of the Friern Barnet Show deliberately towards liquidation, which would happen about six months later, with another limited company, MetPro Emergency Response Limited, created in January 2011 with a remarkably similar name, taking over the liquidated company's assets, and then changing its trading name to "Evolution Emergency Response" in the past week, so that the number plate you are referring to in the photograph makes sense now.

No, I'm glad you are not even thinking about suggesting that.

OK Queenie. I must be the King Of Siam then ?

boys, if you spent less time watching Top Gear and looking at car number plates, I would not have to draw your attention to the fact that the important thing here is the process of change completely passed over the heads of our council officers, who carried on throwing our money at them ...

There's a pretty famous picture of Yul Brynner with his kit off and in the days when he had hair. Just saying.

Sorry, MetPro is deadly serious stuff, isn't it? Deadly serious. I can't believe how crassly stupid the council/mayor's office/whoever have been over this fair business.

In Barnet that phrase "you couldn't make it up" comes true.

I would urge your readers, if they are free, to come to the audit committee at Hendon Town Hall tomorrow (Thursday 16 June) at 6.30pm (6pm to be on the safe side) where the audit committee reports on its investigations into Barnet council's relationship with the MetPro companies, and to hear residents' questions on this matter.

Don't think I'll bother looking that up on google image, thank you Ms Morris: I'm still reeling from my close encounter with the abundance of testosterone and good looks in the council chamber of Broken Barnet. I am so looking forward to my return visit tomorrow night for the MetPro meeting.

I have been amazed that the Met Police have allowed this (basically illegal) company Metpro Rapid Response to operate. As far as I'm aware none of the staff held SIA licences and the company had boasted in the past (website now shut down) that they didn't.
The company had illegally marked vehicles (emergency lighting) and staff were openly carrying hand cuffs and batons (also both illegal)
How a local government can get involved with a company (using the word loosely) is amazing, but how the Met Police allowed this to go on for so long is unbelievable.

Its a bit like when you go to Canary Wharf how do the security staff get away with basically using Police uniforms and saying they are "the Police" to visitors?

Its good to see that at least Metpro are off the streets.