Who'll be pulling the strings? The Barnet Tory leadership vote 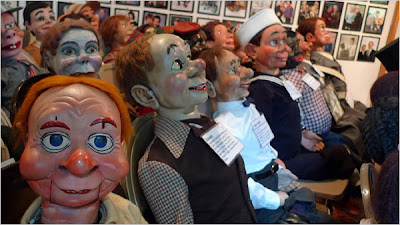 When Mrs Angry was a small girl, almost every children's programme on tv was some sort of puppet show, or ventriloquist act. I suppose it was a cheap and easy way of filling the schedules, but an over dependence on such shows at an impressionable age had a notable effect on Mrs Angry's grip on reality. One rainy afternoon, she can clearly recall, she was playing by the fireside while her father was watching the news. Glancing at the news reader, she remarked to her father, 'Daddy, those puppets are awfully good, aren't they?'

Mrs Angry's father put down his paper and stared at his daughter. 'Puppets?'
'Isn't he a puppet?'
Mrs Angry can still remember the look of sheer horror on her father's face, when he realised he had produced a child of such evident stupidity, and was then obliged patiently to explain the difference between Bill and Ben the Flower Pot Men, ventriloquist dummies, and real people.

Since then, it must be said, from time to time, the confusion reoccurs. There is a curious lack of animation, for example, amongst the ranks of our Tory politicians, here in the amusing puppet show that performs in the name of the London Borough of Broken Barnet. But who says live entertainment is dead?

This weekend the puppet Tory councillors of Broken Barnet will gather together and elect a new leader. We know very little about the campaigning for this election: less secrecy, frankly, is involved in the appointment of a new Pope, and I imagine there is probably more democratic debate within the ranks of the average papal enclave than there is allowed in the arcane procedures of the Barnet Conservative associations.

According to one press story, however, there are three candidates: Andrew Harper, Mark Shooter, and Richard Cornelius. Sadly, Brian Coleman has decided not to risk it, or no - what was it? Too many other committments. Headlining at Glastonbury. Frightening babies at Finchley Carnival: oh no, hold on: the new council charges have put the kybosh on the hundred year old event, haven't they?

I do think that Andrew Harper may have shot his bolt, rather, by allowing the urge to declare himself to come so early - and so soon after the news of Lynne Hillan's departure. Since then there has been a resounding silence from him, interestingly - and he is said to be worried about maintaining his portfolio, markedly reluctant to stand down from his position as deputy leader.

Mr Harper has also maintained a stiff resolve not to comment at all on the MetPro scandal, which is pretty shabby, in the circumstances, but no doubt he is hoping that no one will associate this appalling mess with him, even though, of course, he has been acting as leader for some time now, and has presided over the period of exposure of the facts with an apparent failure to grasp the enormity of the issue.

Richard Cornelius: well, Mrs Angry must admit to feeling much more kindly disposed to Mr Cornelius now that she has discovered he is a Hatton Garden jeweller. Hello, Richard. I am willing to learn to love that retro Dickensian clerk thing you have going on, and agree with you about poverty being no bar to success in life, and overlook your opposition to more public involvement in council procedures (such a bore, democracy, isn't it?) ... if you make it worth my while.

Genial, dashing, multi millionaire Mark Shooter: hmm, can't see anything not to like there, can you, ladies?

But to be serious - always difficult, but I'd better try, just in case Dave Hill is reading.

This is a pivotal moment for the future of this local authority, and for the future of the residents of this borough. The MetPro audit has given a frighteningly detailed insight into the total lack of competence and accountability of the Tory administration - it has revealed an institutionalised culture of financial mismanagement and abuse of power. Nothing could better demonstrate the idiocy and danger of the Tories' One Barnet programme, about to be relentlessly hammered into place, with all the risks of bringing down the whole economic structure clear to anyone with any sense.

The new leader of Barnet Council will be responsible for a billion pound budget: one billion pounds of our money, and responsible to for providing services that affect every resident in this borough.

We do not want our services outsourced to the private sector. We do not want private companies using us as an opportunity for delivering ever increasing profits to its shareholders and fat cat Chief Executives. We believe that frontline services should be provided by local authorites to the residents who elect them, and to whom they are accountable. We want to know who is pulling the strings in our local authority, and we do not want the show to be run by the shadowy puppet masters of private enterprise.

We have seen this week that our Tory council simply cannot be trusted with the management of any financial undertaking with private contractors. It is time for a new direction, and a new leader - one who actually believes in their own party's concept of localism, and is prepared to listen to the people who elected him to office, rather than follow a lunatic adherence to an already outdated political ideology.

The new leader will be formally appointed, (or 'crowned', as it it rather worryingly described in the local Times), on June 15th. The very next evening will see the keenly awaited public meeting of the Audit Committee, where the MetPro report will be presented, and the issue debated at last. It would be good to think that there might be a leader in place by then who is prepared to accept the findings of the report, extract the real significance of what it means for this borough, bite the bullet and call a halt to the One Barnet programme.

Alternatively, of course, we may just find ourselves presented with another showstopping display of puppetry, or ventriloquisim, by the Cabinet of Horrors ...

Mrs Angry will no doubt recall her wager with DCMD, who accurately predicted that Brian Coleman would not stand for leader.

I have no recollection whatsoever of any such thing, and I never honour lost bets, being more inclined to sulk instead.