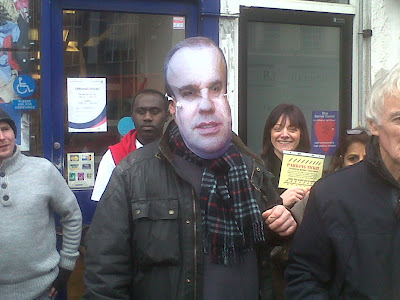 A horribly familiar face at the protest
*see below for footage

Mrs Angry has just returned from North Finchley, where this morning local shopkeepers held a protest to express their fury over the devastating effects on their businesses by the Tory council's new parking scheme. 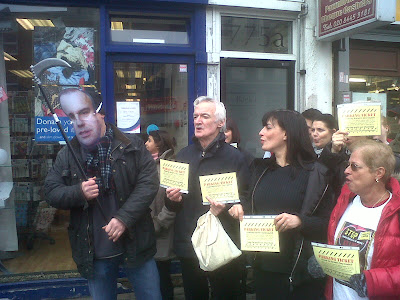 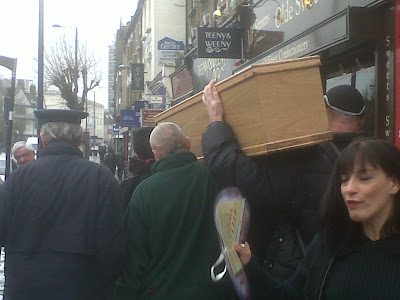 The death of a town centre: killed by Tory parking policy, the last nail in the coffin of a local economy struggling to survive the recession.

Brian Coleman lives nearby, of course, in his charity owned, fixed rent flat, within a short walking distance of these shops. He isn't known for his love of walking, however, and would probably be best advised not to show his face in North Finchley, or any town centre other than the favoured Chipping Barnet street where he and his Conservative councillor cronies have their Association offices.

In the real, real world of Broken Barnet, since the introduction of the new parking scheme, shops and small businesses have seen their trade slashed almost overnight, as the new cashless system and rates of charge have led to an abandonment of the high street by local customers.

Many shops are reporting a loss of up to 40% in trade and, already, some long established independent shops are closing down: this morning Mrs Angry heard that now one well known high street chain has taken the decision to cut its opening time in response to falling sales. The effects of this idiotic, irresponsible policy will be fatal for our local town centres, and unless it is retracted immediately, will precipitate an irreversible process of terminal decline in the local economy.

Do they care, the Tory councillors? Because we should not lay all the blame on Coleman, tempting though it is. He is a fool, and cares only about getting his own way. What about the rest of them? Where are the voices of the Tory councillors who privately howl in despair over his behaviour and his policies, but seem totally unable to oppose them. What is stopping them?

There has never been more antagonism felt in this borough towards the local council as there is now. Every driver and local trader in the borough has been politicised by the parking changes, and the Tory vote has been fatally injured, only three months before the London elections. Tory councillors in Barnet, no doubt, are hoping that all this unpleasantness will have died down before the next local elections: if so, they are deluding themselves.

More immediately, though, it is very interesting to reflect on the effect on the GLA and Mayoral elections: the already unpopular Coleman is looking set to lose his place, and the toxic effects of what is happening here is badly damaging the weakening position of Boris Johnson too. Dear, dear: how very unfortunate.

You have my email address, don't you?

...and now here is some footage, thanks to the Barnet Eye, especially as Mrs Angry now realises she needs her highlights doing.

I hope the populus lay down prostrate before Brian, as he made his way down the road, council staff throwing grit on the pavement before him.

(Well, it's not long till Palm Sunday.)

there were indeed council staff throwing grit on the pavement, baarnett, a rare sight, but no doubt they are on permanent standby in the Essex Park area.