Stop One Barnet: we want to get off - Mrs Angry has had enough 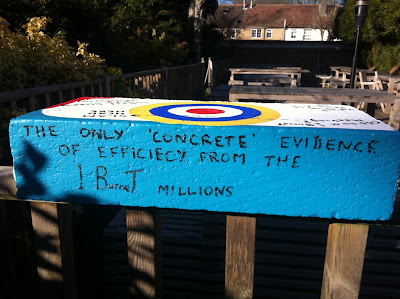 Earlier this week, the Barnet bloggers published an open letter to the Leader and Chief Executive of Barnet Council relating to yet another alleged breach of the council's regulations regarding procurement and contracts.

We have been informed that investigations are now taking place, and according to the lead story in this week's Barnet Press, three members of staff have been suspended pending the outcome of these investigations.

Mrs Angry is pleased that the council is taking these allegations seriously. She would like to emphasise, however, that in the view of the Barnet bloggers, it would be completely unfair if yet another apparent serious failure were to be addressed without involving the senior officers who are ultimately responsible for the proper administration of council procedures.

If you recall, almost exactly a year ago, the MetPro scandal which we revealed, and which exposed an entire culture of administrative incompetence in procurement and contracting, resulted in no sanction whatsoever for any senior officer, or for that matter, any investigation into the possibility of fraud.

The senior management team evaded any real acknowledgement of responsibility, in fact, and have continued in post to facilitate the £1 billion outsourcing of our council services to the private sector. The pressure on delivering this lucrative deal into the hands of the tendering companies is clearly immense, and in Mrs Angry's view, completely in conflict with the public interest.

How many other scandalous failures by this administration have we reported in the last year? The hundreds of hugely sensitive social care contracts that turned out not to be contracts, the business given to companies the council had already, after our MetPro story, discovered not to have a compliant contract? Do they yet even know how many non compliant contracts they have? Are there any others lurking in the closet? Let's see, shall we?

And still it goes on: the council simply has not been able to put its house in order, yet is embarking on the massive One Barnet programme,with two separate competitive dialogue processes which will have the most devastating impact on the residents of this borough.

Why are we paying so many senior officers, several of whom are, as we know now since the Ed Lester PAYE affair, long term 'interim' consultants employed via favourable tax arrangements, such extravagantly high salaries for presiding over an administration run with such incompetence?

During the dialogue process, Mrs Angry has tried to raise other questions relating to the issues posed by the apparent failure of the council to implement and maintain the proper regulations regarding declarations of interest.

A FOI request revealed an apparent absence of the appropriate number of declarations, at the highest levels of the council. Very serious concerns have also been raised over the actions of former senior officers, and their links with companies involved in the competitive dialogue process. It has taken weeks for this matter to be addressed, and in the meanwhile the dialogue continues.

Mrs Angry can reveal that at last some 'discussions' on this issue have now taken place, but this is simply not good enough, and this week's revelations prove the point.
It is time to demand that the One Barnet dialogue process for the £1 billion total of outsourced services is completely halted, while an entirely independent investigation takes place into allegations of failure in the regulations that are supposed to prevent conflict of interest in the procurement procedures. It is not fair, nor is it sufficiently far reaching, merely to suspend three relatively junior members of staff during a limited investigation into one incident: the weight of evidence now is such that it has become clear that it is the process itself which needs to be suspended.

Updated later: Mrs Angry is going out for some fresh air, and an Angry stomp across the heath.

Stomp over. And home to more news.


After more than three weeks of no response, a reminder, the intervention of a councillor and an email to the Chief Executive, Mr Mustard and Mrs Angry understand that there is now an active investigation into the evidence of alleged breaches of the code of conduct in relation to the declaration of interests, gifts and hospitality by certain councillors.

The fact that it has taken such an effort to get this procedure underway is yet another dreadful sign of something very badly wrong in this borough. Just as in the case of the apparent breaches in the compliance with the requirements for senior officers' declarations, it is a deeply concerning issue at any time, but in the middle of this massive commercial undertaking, it is indefensible.

There is a complete failure in Barnet to understand or comply with the need for transparency and accountability in these matters. You might think this is deliberate, or simply incompetence, or both: in the end it makes little difference: Whatever the truth behind the apparent breaches, the management of the perception of conflict of interest has undeniably been mishandled.

And now we have more gob smacking outsourcing news. This time it concerns the other package of DRS services.

Here is a statement today from Councillor Coleman's little helper, Ms Pam Wharfe: Mrs Angry's cynical and twisted comments in red.
"The council has received confirmation that EC Harris is now the sole partner in the EC Harris and FM Conway consortium, as FM Conway has decided to withdraw from the process. EC Harris is one of the short listed bidders for the Development and Regulatory Services (DRS) project, the other being Capita Symonds".

How odd. Staff have been invited to meet ECHarris and FMConway at the NLBP council offices tomorrow. Mrs Angry hears that no one can be *rsed because the staff don't believe this bid will win. Mrs Angry is mindful of the fact that in the other dialogue, the only company making the effort to show interest in the staff, ie HCL Axon, were similarly doomed. In the One Barnet rule book, consideration for the human impact of outsourcing is frowned upon, of course as it will inevitably interfere with the profit margin. 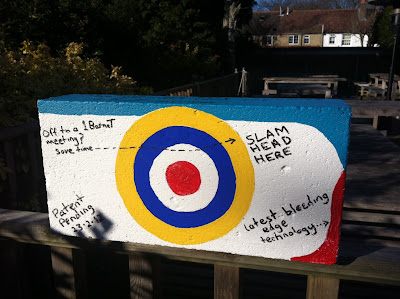 * Update: Oh, and someone has now reminded Mrs Angry that ECHarris is also the partner of BT in the other NCSO package, worth £750 million. More worth the effort, perhaps?

"The council has followed due process and is satisfied that EC Harris can deliver all of the services in the DRS cluster and that the DRS procurement process remains robust, compliant and on track".

"The council has followed due process?" Well that will make a pleasant change, won't it? Bit late to start now, though, isn't it? And please: "The DRS procurement process remains robust, compliant and on track ... ?" When a senior officer working in One Barnet uses the word robust, citizens, run for the hills, because it means everything is going Pete Tong, fast.

"EC Harris' continued involvement is an indication of their commitment to the bidding process. As you may be aware EC Harris has recently merged with Arcadis, a large and successful multinational company. They are now one of two short listed partners, alongside Capita Symonds, who have entered the final stage of competitive dialogue."

Ah. Capita Symonds. Excuse me, must just catch William Hill before they close. Remortgaged the house. Worth a punt, I think.

Due process, so don't worry, just because someone has mysteriously dropped out. It's all robust, compliant and on track. Not like the bad old days of MetPro. And RM Countryside. And six hundred and something other contracts that weren't contracts. Don't panic.

Because this is Broken Barnet, where the senior management team can't even tie their fucking shoe laces without a Barnet blogger checking to make sure they've got the shoes on the right fucking feet.

One billion pounds of your money, safe in their hands?

There is no Friday joke today, because Mrs Angry thinks this matter is so serious that we should all think very hard about it, and ask ourselves some difficult questions, especially those of us at Barnet Council.

In fact, because it is so serious, and a matter of very significant public interest, Mrs Angry has this morning asked Barnet Council some very difficult questions, via a few FOI requests, in regard to the Customer Service dialogue and an apparent conflict of interest involving a former officer and a shortlisted company.

Mrs Angry has asked that this request be responded to as specified by the statutory requirements of the Freedom Of Information Act. Mrs Angry should not have to remind Barnet Council of these regulations, but unfortunately this is necessary. Any failure to comply will be the subject of a detailed complaint to the ICO.

In the meanwhile, if you are a Barnet resident, and if you are concerned about the future of your borough, and the disaster that is about to happen if the calamitous outsourcing process continues in this shambolic fashion, and the vital services we all rely on are thrown into the laps of profiteering private sector companies, you might care to contact your local councillor and tell them that you want the process suspended, pending the result of an independent inquiry. You can find their email details, including those of council leader Richard Cornelius, here . Councillor Brian Coleman is always pleased to hear from residents, of course.

Oh, and maybe you want to have a word with Uncle Eric?

Labels: due process, robust compliant and on track, yeah right

I don't suppose there was a due process written in advance "What happens if a joint venture bidder suddenly goes it alone?". They joined forces because together they could eat the whole slap-up dinner with one of them tackling the starters and desserts, and the other the mains; the meal was too large for just one of them to swallow, and in fact one of them never eats dessert. They would both be quaffing the champagne though except it will be rather flat because you haven't been included in order to win now have you? You are simply included so that a "competitive" process can appear to take place.

Do you know, Mr Mustard, I believe you are in danger of becoming as bitter and twisted as Mrs Angry.

This may not be a good thing.

Arcadis are HERE - something to do with giraffes.

Maybe they bring enough extra to the contract that combined, they are still a viable player. But it is a bit like a cowboy jumping from one horse to another in an old movie, while being chased by a gang of robbers. OK, it isn't, but I've managed to mention cowboys and robbers, so it wasn't a waste of a paragraph.

Yes, interesting, about the giraffes & stuff. Might come in useful, I suppose, in Barnet, if we are going to open a safari park. Also like the sound of their 'Web-Based Arsenic Decision Tree Tool' project, in Denver Colorado. I've heard a lot of good things too about their 'Strategic Planning for Disinfection in Cincinnati'.