Broken Barnet: an interview with the thought police 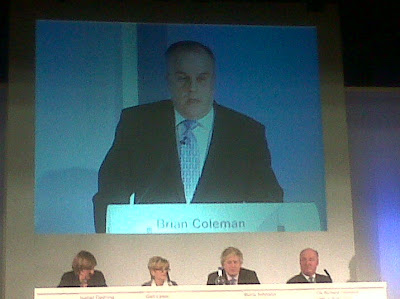 Not 1984: 2012: Boris and Talk London in Barnet, in January, watched over by big brother Chair Brian Coleman.At this event the strength of opposition exhibited by the audience to Coleman's parking scheme led Mayor Boris to express his support for Helen Michael. The event was held, ironically, at the police Peel Centre.

People often ask why Barnet has produced such an intensely active blogosphere.

At the Netroots conference the other day, trying to explain this, I joked about what you might describe as 'the foetid atmosphere of a London borough run by a lunatic collection of mutant, dim witted neo Thatcherite Tories ... '

I also joked that I should have been more forthright in my description. Of course I had forgotten to add the other unique characteristic of this council's form of government: the remarkable tendency to shameless, soviet style repression of the freedom of expression, the defence of free and open debate, the right to challenge and hold to account the often outrageously undemocratic decisions and policies of our elected representatives.

You may recall that last year blogger Mr Mustard was the victim of a frankly deranged attempt by Barnet to have him prosecuted under the pretext of the Data Protection Act, in a desperate move to try to shut down a vociferous critic of council incompetence.

Think back even further to the MetPro scandal, and the use of illegally operating, unlicensed black shirted bouncers to bar residents from a council meeting and illicitly film me and others present with hidden cameras.

Remember the intimidatory Big Brother posters that appeared at council offices on the day of strike action?

Consider all the many, many examples of the refusal to answer Freedom of Information requests, or to publish open data which should already be in the public domain, remember the questions over conflicts of interest, and the declaration of interests by senior officers and members alike.

Look at the blatantly manipulative amendments to the consitution aimed at shutting down the process of engagement with residents and non executive members, the censoring of residents forums, the abolition of scrutiny committees, the cynical planting of One Barnet friendly 'ideas' on Barnet 'consultation' websites.

Ask yourselves this: is this how a democratically elected administration is supposed to behave?

Is this localism in action, Eric?

And now, just when you think things can't get any worse, and the recent downfall of Brian Coleman had marked the emergence of a new era, and a new direction for the future of Broken Barnet, look what is happening.

As reported in earlier posts, one of the leading activists in the campaign which was largely responsible for the defeat of Coleman in the GLA election is Helen Michael, the cafe owner from North Finchley who refused to stand by and see her business, and so many others in the area, face ruin as a direct result of the idiotic parking rules introduced by Coleman.

All around the borough, within a week or so of the new rules and charges being introduced, high street traders were reporting up to 40% loss in business. The clear evidence of the catastrophic impact on local businesses was ignored by Coleman, and ignored by the leader of Barnet, Richard Cornelius, and ignored by all the Tory backbenchers. Cornelius and all his Tory colleagues knew perfectly well that the scheme was a disaster, but chose to remain silent.

Because they are all a bunch of snivelling, hypocritical cowards, with not a backbone amongst them. They said nothing, but waited until after Coleman's defeat, accomplished by a determined campaign of opposition led by the blogosphere, local traders, and residents' groups. 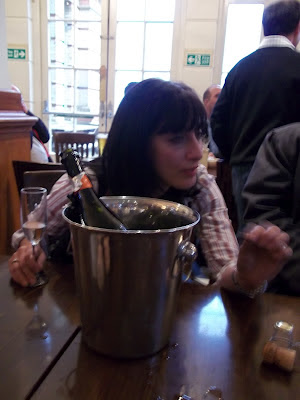 Only then did they - oh, and our local Tory MPS - begin to fall over themselves with a sudden desperate need to convince us that they had always really been against the parking scheme, you know. Leader Cornelius even apologised in a local paper - he was sorry. Sorry!

After Coleman's political demise and two humiliating by election defeats, the parking scheme has been effectively abandoned and will be reviewed. And at what cost? How many businesses, in the meanwhile, have gone under? Will the damage to our high streets ever be undone? Can it be undone?

If it were not for the courage, resilience and determination of Helen Michael, the campaign against the parking madness would never have been won. Tory leader Cornelius was so impressed by her he even had the gall to invite her to stand as a Tory councillor. Guess what, she refused - even though she was a former Tory voter.

Helen had, as part of her efforts to oppose the parking scheme, created, published and distributed a poster directly linking Coleman to the damage to high street trade. It was a hugely popular poster, for obvious reasons, with traders and residents alike, all of whom were badly affected by the impact of the scheme, both financially, and in terms of restricted accessability. 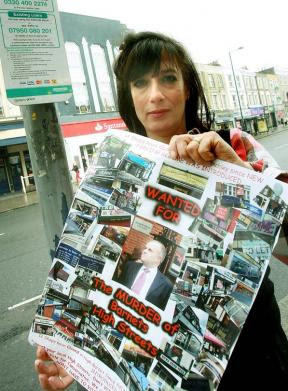 pic courtesy Times Series Helen & the poster:
please note - if the thought police object to the publication of the publication of this poster, do let Mrs Angry and the local press know & we will censor it immediately ... oh and you might want a word with a few hundred traders for the same reason

She was visited by the police in Cafe Buzz, apparently after a complaint from the council, who pointed out politely that the only thing wrong with it was that she had failed to put her details as publisher on the poster as required by law. She immediately agreed to amend the poster, and did so.

The police told her that there would be no further action.

And there was no further action. Until now.

On the night before the election, residents in Finchley and elsewhere in the borough, as well as elsewhere in the capital, reported seeing an organised team of flyposters arriving in the streets and plastering bus stops and empty shop windows with Back Boris posters. It would appear that this co ordinated event, in apparent breach of the law, has not been investigated by the police.

During the Brunswick Park election, the local tory party issued a series of leaflets with some very creative and interesting claims. One of these reported that they had successfully won the retraction of parking charges for the area's previously free car parks. This was in breach of the purdah rules that regulate the conduct of elections. When the Labour agent complained, the CEO of Barnet, Nick Walkley was obliged to admit this was a breach, but merely asked the Tories to 'withdraw the leaflet'. It would appear that no further action has resulted from this, either.

A question for you, Mr Walkley: why is Ms Michael being investigated, and no action taken in regard to the other two cases?

Because out of the blue last week - and blue does seem to be the appropriate colour -Helen Michael was contacted by police and told that she would be obliged to attend a local police station for an interview in regard to the Coleman poster.

She was asked for her 'co operation' - failure to show such 'co operation', one imagines, might have led to her being arrested. Taking legal advice, she sent a statement to the DPP, putting her version of the matter.

Yesterday Helen spent two hours at Barnet Police Station, not arrested, but under caution, being interviewed - a recorded interview - by two detectives from what she was told is Scotland Yard's 'Special Investigation Unit' - whatever that means.

There is a Specialist Operations branch which deals with various security issues, including counter terrorism, but one would imagine that only a complete idiot would think it likely that a cafe owner from North Finchley worried about the drop in sales of her tuna mayo baguettes was a threat to national security, or even the security of a tedious minor local politician - or indeed think it a justifiable use of public resources, especially at a time of such need for counter terrorist scrutiny in the preparation for the Olympic Games.

Even without this unprecedented time of security, which already is causing an enormous strain on the capability and resources of the Met police in London - with the level of criminal activity in this borough, in our city, can we really afford the time, money and energy to interrogate a woman over a months old poster relating to a local parking scheme?

Mrs Angry has seen a transcript of some of the questions asked at this interview, and frankly the nature of these questions is just incredible: not technical questions, but in a deeply worrying line of exploration, actually probing the thought processes behind the production of the poster.

What were the reasons behind the poster?Were these her own ideas?Was it just the local traders who were involved in the production of the poster?

Helen believes that the official instigator of the complaint is the council. If so, then this is simply outrageous: another example of the dysfunctional, Orwellian mind set of the deluded Tory administration and its senior management - a sign of the desperate, blatant need they have to control not only what we do, but how we think, and what we say.

And what possible justification there can be for police intervention into the thoughts and opinions of ordinary residents, who are, after all, doing nothing but acting within their democratic right to freedom of expression, and attempting to exert some sort of control over a disaffected council elected to represent their interests, but clearly acting with every intention of serving their own self interests, and the interests of a wider commercial sector, encircling this borough, and waiting to grab any opportunity for profit at our expense.

But then of course: how could we forget?

This is not a local community, empowered by the principles of localism: transparency, scrutiny, and accountability, the natural home of the Tory values of liberty, freedom and choice, but the inversion of everything that those qualities represent, the ultimate suburban dystopia, where thinking and speaking out against injustice is subversive and dangerous, and must be controlled.

This is Broken Barnet.

The police questions really make me wonder what country we are living in. The police state appears to rushing headlong towards us.

Yes, Mr Reasonable: it just defies belief that this should happen at all, but at a time of preparation for the intensely demanding security challenge of the Olympics, such a move would seem totally disproportionate. This raises very serious questions of whoever authorised such an investigation, and their motivation.