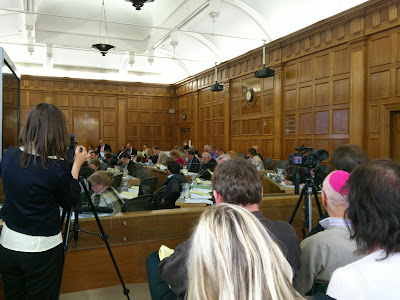 Brian Coleman, in a lovely pink tie, watched from the gallery

Since Brian Coleman lost his grip on the studded leather reigns of power which formerly granted control over his willingly submissive Tory cabinet colleagues, he is no longer master of the job of answering any questions put to full council meetings, and is free to pose his own interesting demands of other Cabinet members. The questions he submitted for last night's meeting, frankly, appeared to be there not so much to provoke a response, as simply to provoke.

He asked for example about his favourite subject, the recent jubilee celebrations, wanting to know how many street parties were 'given permission' to take place by the council. This was just a preamble to the real stirring he wanted to do, of course, but note the typical reference to 'given permission', - he likes to remind us that nothing takes place in this borough without the deference to our masters, the Tory council.

Councillor Longstaff, yes, golden boy, the Actor, replied in writing that the number was 110.

Coleman had a supplementary question, delivered in a rather tetchy tone of voice. Would this event not have fallen foul of Longstaff's soon to be introduced, draconian boroughwide drinking ban?

Brian is of course a practising Methodist, and might be expected to abhor the consummation of alcohol: certainly Mrs Angry, as far as she can recall, has never seen him sitting on a park bench, or outside Tescos, with a tin of cider, asking passers by for spare change, so she was rather surprised that he would be so upset by the new ban.

Longstaff looked cross, stared straight ahead, and spoke in a rather prissy way about the Need To Avoid Anti Social Behaviour. It was a small spat, but significant. A lesson in how the Tory group dynamics have changed.

Next question from Coleman: erm, on the very important subject of wind turbines in Lincolnshire, and - how was Barnet going to 'prevent any more of these hideous monstrosities despoiling the Barnet skyline'?

YOU ARE A MONSTROSITY ... came the loud and immediate riposte from a gentleman in the public gallery, who then added thoughtfully ... AND YOU ARE A PHILISTINE, AND A PEA BRAINED MORON ...

Oh dear. No one disagreed with this unsolicited character reference, as far as one could tell, amidst the raucous laughter and thunderous applause.

The Cabinet member responsible for housing in Broken Barnet is, in Mrs Angry's considered view, a particularly regrettable choice for a post that requires a strong degree of knowledge of the complexities of this subject, and an equal amount of sensitivity to the social issues it embraces. An attitude of compassion, and empathy for those in need is clearly an advantage in such a position.

Tom Davey shows little or no evidence of any of these qualities as he undertakes his duties. He is one of the young, hardline and frankly rather immature Tories who are given far more responsibility than they deserve.

This boy, who works for a tobacco company, is keen to encourage the less fortunate residents of Barnet to aspire to the sort of life he leads. In fact, it is alleged that he still lives at home with Mum & Dad, but he is very quick to make judgements on those less advantaged residents in the borough who have their own families to support, and desperately need social housing, or perhaps are completely without accommodation.

This is how, earlier this week, Tory cabinet member Robert Rams tweeted some good news for the residents of Barnet, courtesy of the new housing policy designed by his chum Tom Davey:

Welcome news from Cllr Davey http://www.barnet.gov.uk/news/article/1 … - The end of a council house for life in Barnet

Welcome as long as you are not say, the mother of young children, given a house to rent at last, and then told that in five years time the family may not have any right to remain in their home. Imagine what it will be like, what anxiety this will cause the least advantaged members of our society?

How will they be able to maintain a sense of stability, security and continuity for their children?

How will they be able to keep them at their schools, if they are forced to leave?

What effect will it have on their children if they lose their homes?

In the short time they have a secure tenancy, how will they manage to form any sense of belonging to a community?

How does the Tory council think the need to stay below a certain income level will encourage their much vaunted sense of 'aspiration'?

Oh, but don't worry: as long as you are not foolish enough to be the child of parents whose lives are deemed not to be morally inadequate by our Tory councillors, you might be able to be fast tracked to the front of the queue, or given a secure tenancy.

Really good news therefore for 'ex-armed forces personnel who have seen active service, older people who have reached retirement age and households where a person, their spouse or child is disabled or terminally ill' - they get secure tenancies.

Presumably the terminally ill have to inform the council if they are likely to live longer than five years, in case they cause an obstruction in the housing list.

If you are just disabled, on the other hand, you'll be laughing, won't you - if you have the time and energy after working a six day week, because you've lost all your benefits in the welfare reforms?

And as the Tories have promised before, if you can prove you have made a positive contribution to the community, you are going to be given preferential treatment when applying for social housing.

Children whose parents cannot prove this indefinable moral worth will wait in line. Serves them right, and will teach them to aspire to grow up to be Tory councillors and maybe, like one of Davey's colleagues, get paid £15,000 a year for chairing no committee meetings whatsoever. Or even better, get yourself housed in a fixed low rent flat, courtesy of a charity. Better than being a feckless benefit scrounger, of course.

Back to the questions then, and one from Labour's Cllr Brodkin, asking for the number of people in the last year to whom Barnet has discharged its housing duty under s. 193(5) of the Housing Act 1996.

Davey's written reply - in that period - 'we ended the main homelessness duty to 31 households because the applicant refused a suitable offer of rehousing.'

The supplementary follow up received an interesting comment from kind hearted Councillor Tom Davey. He referred contemptuously to these homeless people as 'people who won't help themselves.'

People who won't help themselves.

There are no words, Councillor Davey, to describe the way I feel for someone who so clearly lacks the compassionate understanding that any of us should hold for those who have to depend on help simply to find some sort of home.

On to the rest of the night's business.

Oh dear. Councillor Andrew Harper next up, with a pointless, pointless exercise: a motion brown nosing the plan by Michael Gove to introduce 'greater rigour' to public exams.

Of course supporting government thinking on education directs the main thrust of Cllr Harper's portfolio policies, and he wants everyone to know about it.

He is, he told us, gushing like a school girl, a Big Fan of Michael Gove.

The extent of Andrew's love for Mr Gove was eye wateringly obvious, to be honest. He agrees with his idol that exams are far too easy. The evidence for this was a couple of kids he knows who have been complaining that they did not feel sufficiently 'stretched' by their GCSEs. All public exams have been dumbed down, therefore, he thought. And by another huge leap of Harper logic, this was proof, in his view, that the whole system is entirely wrong, and we must return to halcyon days of grammar schools and secondary schools, o levels and a safe educational distance between the working and middle classes.

Here then, is another example of Barnet Tories seeking to proritise the needs of the comfortably placed residents of this borough before the best interests of the less advantaged.

Harper's intellectual elitism is typical of their blinkered view.

What about, Councillor Harper, the children who do not have the luxury of being bored by so easily achieving the top grades in GCSEs - those children who are not receiving an equal accessibility to a good education in this borough? Not every child can find a place at one of the good schools in Barnet. Not every child can get through the hoops of selective entrance exams, or afford to live in the right catchment area, or pay private school fees, and if you cannot, in this borough, you are pretty much condemned to a second class education, to go along with your second rate housing and a two tier healthcare system.

Other Tory councillors had strong feelings on this subject, like Brian Coleman's new friend and assistant, Sancho Panza to his Quixote, the pompous antipodean Chair of Finchley & Golders Green Forum, Reuben Thompstone, who is - you'll never guess - a teacher.

Mrs Angry would love to know what his pupils think of him. And call him, behind his back. (If you are a pupil of Mr Thompstone, do email Mrs Angry and tell her, there's a good boy) ...

He told us bla bla bla yak yak yak -no: sorry, Cllr Thompstone, I appreciate your always interesting comments, as you tell us at our forum - but I am going to cut you off, just because I can. There. See how you like it.

Uh oh. Councilllor John Hart, he of the silver tongue and twirly handlebar moustache, the secret, he claims, of his formidable appeal to the ladies of Mill Hill, or at least some of them, is on his feet, keen to pass on his views on the subject of education. He was a lecturer, you know, in linguistics, (yes, really) and maintains a keen interest in this field. Or so it is rumoured.

He wasn't, he told us, going to talk about the nurture/nature argument, or even B F Skinner, or rats (what? Mrs Angry began to feel a sense of unease)... no, he was going to remind us about what Antony Crosland - do read the biography by his wife Susan, by the way, he said - what Antony Crosland said, do you remember?

He paused dramatically, then roared across the chamber: 'IF IT'S THE LAST THING I DO, I'M GOING TO DESTROY EVERY LAST FUCKING GRAMMAR SCHOOL ...'

The chamber and the public gallery fell back in their seats, stunned ... Mayor Brian Schama, utterly aghast, ordered him to withdraw his comment.

The only sensible comment on the whole motion was from Labour's Alex Brodkin, who observed, with great exasperation, that 'lauding' Michael Gove and 'salivating' over his ideas was all very well, but the residents of Barnet do not pay councillors to debate government policy.

And why should our Tory councillors be able to waste valuable time in public meetings debating government policy, when they do not allow residents to debate Tory council policy even in their own forums?