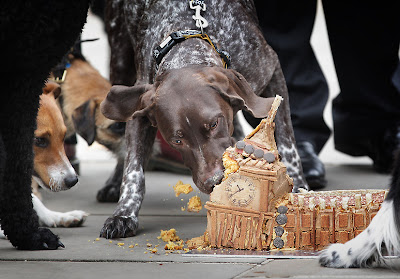 No, Dotty is the winning dog, not the owner of Max.

Yesterday in Parliament, then: not much happened. Liam Fox? Who? No, no: forget about all that (very hospitable, isn't he?). * Update: please note - yet again, the curse of Mrs Angry has struck since this post was published ... Frankly, our MPs had more pressing matters to concern them. Hard working Hendon MP Matthew Offord, for example, tore himself away from his busy schedule, standing still in the Action Man Christmas display window at Hamleys, saluting at passing tourists, and took part in the parliamentary dog of the year competition. Well, I mean he didn't take part, as far as I know -Max, his long suffering jack russell was the entrant. (He is the dog on the left looking a bit fed up).

Poor old Max has been a helpful aide to Matthew, after a, well, accident prone, and less than impressive start to his parliamentary career, and now the hapless mutt gets dragged out on any excuse to look cute in photo opportunities with his master (ok, he is quite cute - Max, not Offord - and Mrs Angry is saying this with gritted teeth as a. she is not that keen on dogs, especially the ones that smell and jump all over you, or put their nose up your skirt and b. she is not that keen on Tory MPs, for the same reasons. Although, obviously, she makes an exception for former Tory MPs like Councillor Marshall, who does not smell, and has never put his nose up her skirt. As far as she can remember.)

It is rumoured that Max is actually the master strategist behind Matthew Offord's political career, and Mrs Angry, for one, is inclined to believe it.

Earlier in the year, sadly, it was announced by Mr Offord that Max had swallowed poison, in an unexplained incident. This may have been a cry for help, it may not. The pressures of parliamentary life can be unbearable, of course.

This week has, as we know, been full of stories of Tory advisors, friends and PR gurus wandering about the corridors of Whitehall and City Hall, with free access granted by ministers or the Mayor ... Liam Fox, Adam Werritty, Boris Johnson, Lynton Crosby and all that: but let's not forget Max, whose presence at Westminster was the subject of an investigation not so long ago, when it was discovered the Hendon MP was sneaking him into his office at Westminster.

Max, unfortunately, did not have the correct security clearance, and was consequently barred from resuming his duties as Offord's chief advisor, research assistant and political aide. Tragically, trying to invoke the Human Rights Act on his behalf was not successful, as Matthew Offord had forgotten, or did not know, that Max was not human.

Oh: the competition? He won third place: next time he is hoping to find funding from a generous benefactor to promote his campaign and then who knows what might happen? Max, I mean, not Matthew.

Andrew: have you thought about adopting a kitten?

And what did Matthew recommend for the soup course first?

You can tell it is a Tory MP event: look how Dotty is allowed to wolf the cake down, while the others have to sit and watch ... poor Max looks a bit cheesed off, doesn't he? I hope they gave him a bit.

I`ve often wondered what life after politics is going to be like in 2015 for Max the PR guru.Dogs home or dog soup,it goes well with a smidgen of parmisan..

Don't be horrible, button55. Poor Max. Anyway, he'll be ok: he's a cute doggie. It's his owner who should be worried about the future.

Well at least we get entertainment value on the expense of our Manuel,he`s going to be a great loss.