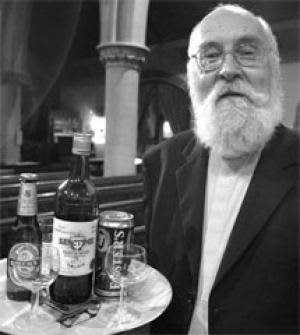 
My thanks to twitter followers Dr Julia Hines and Mrs Angry's favourite Rabbi, (& chaplain to the Broken Barnet blogging community), Jeffrey Newman, for alerting her to the following amusing piece of information ...

Remember the naughty banner snatching Tory vicar Adrian Benjamin, close chum of Brian Coleman, whose Friern Barnet Summer show has been bailed out to the tune of thousands of pounds from the Rev's parish arts centre? The minister who shamelessly 'confiscated' the banner of Barnet Alliance against the Cuts at this summer's show, and threw the Alliance out of the tent, comparing his actions to Jesus in the temple? Mrs Thatcher's favourite vicar, who justified his banner snatching on the basis that the object was as dangerous as 'a bomb in the park', and who called Mr Silverman, the 74 year old resident from whom he wrested possession of the banner, 'a rogue'?

Guess what: Father Benjamin is also a prebendary of St Paul's Cathedral, and at 3.15 this afternoon, you will be pleased to know, he will be on the steps of the cathedral, in front of the occupation, in order to lead a prayer session, in a marvellous demonstration of Christian love and photo opportunity evangelism.

It would appear that Mrs Angry's telling off over the banner incident has led to some sort of Damascene conversion (St Paul ... Damascus - see what I did there?) : evidently the Rev is now full of remorse for his sins, and keen to support the principle of freedom of expression and the right to peaceful protest. Perhaps Mrs Angry's spiritual guidance has, in some profound way, cured him of his regrettable political affiliations, and has brought about a loathing of capitalism, and a rejection of the abhorrent profiteering of bankers and global companies?

Goodness me: the Lord does move in mysterious ways. Perhaps Mrs Angry really does have a vocation, after all.

On the other hand, of course, it may be that he will rush down the steps of St Paul's, kick all the tents over, and grab some more banners for his collection, hidden in that cupboard back in the Arts Centre.

Labels: on the road to Damascus, rejoicing in heaven

PS: Mrs Angry and son wandered into St Paul's recently after visiting Tate Modern, and were astounded to find there is an admission charge of £14.50 to enter this particular temple: extraordinarily greedy, and no doubt the loss of income is adding urgency to the prayers of the dean and his faithful prebendaries. Perhaps Londoners might be allowed to visit their own churches without paying for the privilege? Or at least members of the C of E & Tory party: obviously (bad)Catholics should be charged a punitive amount, and socialists.

Mmm: there you go. Does the Rev really think the Almighty (God, not Brian Coleman) would approve of people fighting for social justice being slung out of a marquee by a Christian minister, and yet allow a church to bar people from entering unless they cough up a small fortune? St Paul's is first and foremost a tourist attraction, and has no soul.
Earlier this year I was in Durham Cathedral and watched a load of deans etc perform evensong, all dressed up in silk and velvet vestments, prancing about waving gold maces etc, and then bow their heads in prayer, asking to be blessed with the simplicity of St Cuthbert, the celtic saint who lived as a hermit on Holy Island, then one of the Farne Islands. Dear oh dear. Fr Benjamin would have loved it.

Something tells me that Rev Benjamin may see himself as better suited to more exalted company than just us ordinary mortals:

trimmed his beard especially for the occasion, too ... btw, Mr Mustard, are you trying to copy the Rev's look with your new beard?