From the frontline: Father Benjamin takes on Occupy London

Just like the eyes of the Lord, the eyes of Mrs Angry are everywhere, keeping watch on the wicked, and the good, and this afternoon, citizens, Mrs Angry's spy was on duty in Paternoster Square, waiting for the arrival of Broken Barnet's very own banner snatching vicar, Brian Coleman's dear friend, the Reverend Adrian Benjamin, to preach amongst the heathen masses of the Occupy London tent city. (See previous post ...) 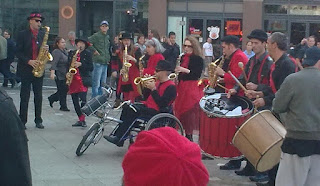 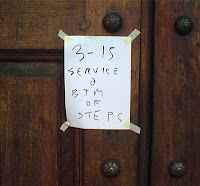 Like Martin Luther, the demands were nailed to the door of the Cathedral. 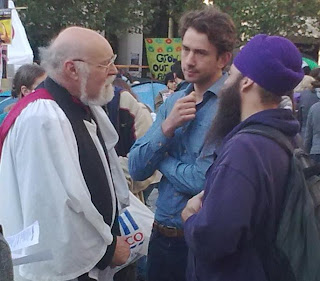 Adrian mingled with the crowd next to tent city. (See the banners quivering in the background). 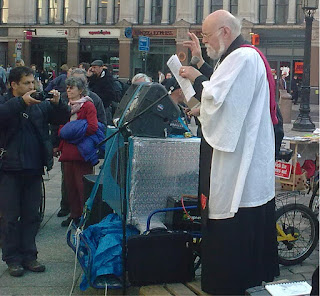 With the pressing of the flesh afterwards, the question was asked: "Do you repent for the Friern Barnet Summer show incident, so that I can tell Mrs Angry?"

" No, there is no repentence, though my good wishes to Mrs Angry. Tell her that I went all the way through here today, and did not remove ONE banner!"


Mrs Angry likes a vicar who goes all the way, don't you ladies?

As for the anti-capitalist protestors of Occupy London - well, she imagines the Reverend would want you to be mindful of the following instruction we find in Isaiah, 54:2:


"Enlarge the place of thy tent, and let them stretch forth the curtains of thine habitations: spare not, lengthen thy cords, and strengthen thy stakes ..."


Thanks to Mrs Angry's spy for his report from the front line ...

Since this post was written the story has continued, of course, with clerics resigning, and evictions threatened, and then not threatened, and love and peace breaking out in a weird, constipated sort of Church of England way.

Mrs Angry was amused to hear that after Father Benjamin's sermon on the mounted steps of St Paul's, he led the assembled occupiers in song: guess what - Jerusalem, ha - yes, really, and then, no not the Red Flag, and then the old rogue went about the crowd making a collection for no, not starving orphans, for the upkeep of the Cathedral, which makes a mere £20,000 a day from entrance charges ... and what could be a more deserving case for charity? As far as we know, the Rev has not yet strolled along to the Stock Exchange or the Bank of England with his collection box.

In today's local Times, there is a story about Father Benjamin's missionary work with OccupyLSX:


... in which the old fool says it was right to shut the cathedral:

“It was absolutely necessary. If at any stage it had rained people would almost certainly have gone into the cathedral and there could have been scenes of violence, sit-ins and from a health and safety point of view it had to close.”

Can you imagine the scene, unwashed people in the house of the Lord, and all without entrance tickets?

Happily, it would appeat the Rev has had a divine message informing him that God has cancelled all rain in the City of London area for the foreseeable future, and that it is therefore safe to open the doors again. God, or maybe the devil in disguise, has also pointed out that shutting up shop is bad PR, and won't sell any postcards.
Posted by Mrs Angry at Sunday, October 23, 2011

Labels: going all the way, mentioned in dispatches, mission impossible

And someone could have taken a bomb inside disguised as an umbrella.