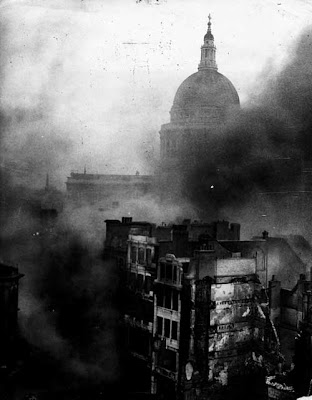 Here is a post that might appeal to Mrs Angry's brother, who will be surprised and impressed by his sister's extensive knowledge of - yawn - bombing campaigns of WW2. Look: a photograph of St Paul's Cathedral, taken from the Luftwaffe archives ... the building still standing, defiant, amid the firestorm of the Blitz, thanks in no small part to our father, who was on duty there that night, with the Auxilliary Fire Service, along with every other volunteer and full time firefighter who could be found, desperately fighting the onslaught of German bombs dropped with such relentless intensity on our city. 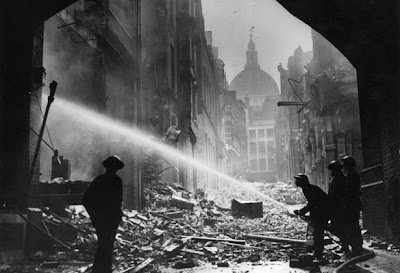 And here again, the wreckage of the blitz, still smouldering.

How long was St Paul's closed for, after this raid?

As soon as it was possible, it was opened and back for business, a powerful symbol of endurance and the determination to continue to fight for a free Europe, reclaimed from Hitler and his thugs.

St Paul's, of course, already had an iconic significance, rising as it did from the ashes of the Great Fire of London. It represents our national identity, our resilience, survival, tradition and continuity.

No: not by fire, or flood, or the Luftwaffe.

Because of a few people sat in tents in the square outside. Occupy London, as it is known, is a peaceful anti capitalist demonstration far more dangerous than the Blitz, or any elemental act of God.

The Occupy demonstrators wanted to protest outside the Stock Exchange, but couldn't. Never mind. If they wanted a suitable symbol of twenty first century materialism, St Paul's will serve just as well.

After an outward show of tolerance from the Cathedral authorities, relations with the protestorsmhave become strained, as falling attendance levels at the Cathedral are expressed by a dramatic loss of income from the exorbitant admission fees and shop revenues.

Jesus may have thrown traders out of the temple, but at St Paul's, trade and tourist trafficking has replaced worship as the temple's primary function. The Stock Exchange at least has no pretence to be anything other than a place of business: in my opinion, a church that has become a place of business deserves no sympathy from me, you, or anyone else. It has sold its soul to the devil for a coachload of tourists, and is now paying the price.

I don't care if the tents stay there until Christmas, and I don't think it matters if they are still there for the Remembrance Service: in fact, what could be more fitting, when we remember those who lost their lives in wartime, defending the right to the freedom of expression that is so increasingly under threat in this country, both locally and nationally?


There is a blogpost on the Telegraph website today,

written by a Dan Hodges, described as a Blairite cuckoo in the Miliband nest: a metaphor guaranteed to irritate Mrs Angry, on two separate counts. Hodges, a Labour activist, gives us the benefit of his rather surprising Telegraph tailored views on the protest. He is an agnostic, but he claims to be furious that church goers are being prevented from worship. Er, except they are not: it is the tourists who can't get in. He is a former union and Labour party employee, but he thinks the protestors display a 'mirror image' of the 'excesses of capitalism'. He asks:

"So why do we, on the Left, have anything to do with them? They don’t represent our world view. They don’t assist the broader Labour movement in achieving any of its objectives. Quite the opposite, they make attaining our goals all the harder.

Instead of Labour MPs tabling early day motions supporting Occupy LSX, they should be tabling motions condemning them. Instead of tweeting and blogging our support, we should be outspoken in our disapproval. Rather than expressing solidarity we should be demanding they pack up their tents, roll up their sleeping bags, and get the hell out of town."

Tony would be so proud.

Compare this, now, to a statement made today, reported by Reuters,

headed “Towards Reforming the International Financial and Monetary Systems in the Context of a Global Public Authority,” which calls for:

"the establishment of a “global public authority” and a “central world bank” to rule over financial institutions that have become outdated and often ineffective in dealing fairly with crises ..."

“The economic and financial crisis which the world is going through calls everyone, individuals and peoples, to examine in depth the principles and the cultural and moral values at the basis of social coexistence,” it said.

It condemned what it called “the idolatry of the market” as well as a “neo-liberal thinking” that it said looked exclusively at technical solutions to economic problems. “In fact, the crisis has revealed behaviours like selfishness, collective greed and hoarding of goods on a great scale,” it said, adding that world economics needed an “ethic of solidarity” among rich and poor nations.

“If no solutions are found to the various forms of injustice, the negative effects that will follow on the social, political and economic level will be destined to create a climate of growing hostility and even violence, and ultimately undermine the very foundations of democratic institutions, even the ones considered most solid,”

Oh: who was responsible for this piece of radical analysis?

Take that, Rowan Williams, and nail it to the closed front doors of St Paul's Cathedral, why don't you?
Posted by Mrs Angry at Monday, October 24, 2011

Labels: Mrs Angry gets five minutes off her time in hell, plenary indulgence

BREAKING (as Mrs Angry would say):

All those elocution and deportment lessons you have been havin', Mrs A, 'ave been wasted.

Still, at least they won't have to count the spoons afterwards.

Raine Spencer decided to get the Northern Line home, and dismissed Smithers, her chauffeur.

His voice was deep with desire. "I want your blog, Mrs A," Smithers said. Wildly Mrs A sought to escape. She glanced feverishly around the room, but she was impresoned.
"I desire and detest you," she said, slowly and feelingly. "Does that increase my unique users rate?"
"Immensely," he answered, smiling. "A complacent woman is often a bore..."
His arms enclosed her, she fought against him wildly and there was the sound of rending.

(I had to look that up. It is either "Tear (something) into two or more pieces" or "Cause great emotional pain to a person or their heart". So you takes your choice. As long as it's not rendering.)

oh baarnett, must you play with my foolish woman's heart? I could do with some rending, as it happens: bit of a loose end tonight Nothing on tv. Raining. Bored.

I can't tell you how disappointed I am that our beloved borough will not now be graced by the presence of Raine, Countess Spencer. I suppose I had better tell my escort. He will be devastated.