The women of Dale Farm 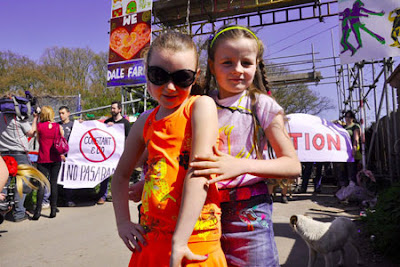 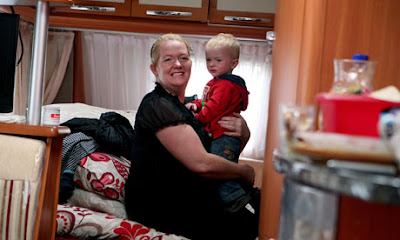 This evening I sat and watched a Panorama film about the eviction of travellers at Dale Farm. I watched it in the grip of mounting fury, and disgust. After it finished, in fact, I went out into the garden to breathe in the cold night air and calm down, because I was so enraged, and upset.

The film concentrated on the effects of the eviction process on the women of Dale Farm. It was explained that the men did not want to be filmed, because of the necessity to remain anonymous in their working lives. Being recognised as a member of the travelling community is not advantageous to the prospects of commercial success in the greater Basildon area.

That the film centred on the women was significant. It shifted the focus of the dispute from the fighting, and the efforts of outside activists, to the reality of family life, of a way of life lived on the margins of conventional society, and a culture shaped from centuries of displacement, now left with nowhere to go, and nowhere to stay.

One of the girls on the site, Shannon Egan, spoke of the distress she felt about the prospect of eviction from her home. 'It's like a stinging bee flying around my heart, and stinging me in the middle of it', she whispered.

People mock when you use the word culture in relation to Irish travellers. It might just be acceptable to acknowledge that Romany gypsies have traditions and a language, and recognisable customs: the word traveller, and what it signifies, is misunderstood and used as a term of abuse. Oral traditions of minority cultures are necessarily hidden from outsiders, and then lost without record. This is what the dominant culture wants: call it social progress, when it is done by stages, with education and council housing, or maybe call it ethnic cleansing, when it is done with twenty million pounds worth of bailiffs, and court orders, hundreds of riot police, and a day or two of pitched battle, ending with women and children shaking with fear as they watch their homes burning down.

The leading figure in tonight's film was Mamie, a travelling woman of great spirit, and a woman to be respected and admired for her defiance, endurance and dignity in the face of such shameless, pointless bullying.

Mamie told us that eviction was nothing new to her: she was one of those driven from Twin Oaks, the Borehamwood site mentioned in a previous post, here by the same bunch of bailiffs, Constant & Co, who make handsome profits from the ruthless dismembering of travelling people's sites.

At the end of the film Mamie sat hunched in a chair and spoke quietly of her conclusions about the future for her people. She said that travelling people would never have rights. She said 'people don't want to see us as human beings', but would only ever see them as 'dirty gypsies'.

She was only speaking the truth. Go on any comments forum tonight,and even twitter, and you will read the most repellant remarks about gypsies and travellers. Some total stranger with a revolting history of hugely offensive tweets has even felt moved to contact me to announce he has cracked open the champagne to toast Basildon Council. Thanks for letting me know. I hope you received my message, and took my advice.

No other ethnic minority is expected to be the butt of such abuse, and it is only a measure of how far deep rooted such bigotry lies that nothing is done to prevent it.

One of the local residents whose land adjoined the site was shown in the film using raw sewage, fire and a shot gun to intimidate the travellers. After the gun incident the police at last took him away, but then released him without charge. He came home and talked about bringing in a tank.

In the previous post I mentioned the local priest, Father Mason, and he was shown in the film giving communion and his personal support to the travellers, whose religious tradition is another mainstay of the culture no one wants to recognise. This is perfectly in line with five hundred years of English protestant contempt for Catholicism, of course, and how amusing it is to compare and contrast the passionate, tribal faith of the travellers to the feeble, bloodless respectability of the Church of England, as seen this week in the trembling clerics of St Paul's, wringing their hands over all the unsold postcards and Christopher Wren pencil cases in the cathedral shop.

As the Panorama film showed the leaving of Dale Farm, when the remaining travelling families gathered themselves together and left together, peacefully, with heads held high, one young girl addressed the camera and called out that she was not ashamed to be a traveller: she was proud of it. And so she should be.

The women of Dale Farm reminded me so much of some of the women in my family, my mother and my aunts: their unstoppable spirit, their faith, their outspoken defiance, and their fearlessness. I think maybe I know where it comes from.

The Irish people are natural born survivors: they have to be. Irish travellers have survived right on the edge of society until now: now they are being pushed over the edge. You can choose to stand by and keep quiet and let that happen, or you can challenge your own prejudices and speak out.

This is me speaking out.
Posted by Mrs Angry at Thursday, October 27, 2011