One Barnet: the theatre of the absurd - Barnet employees fight back 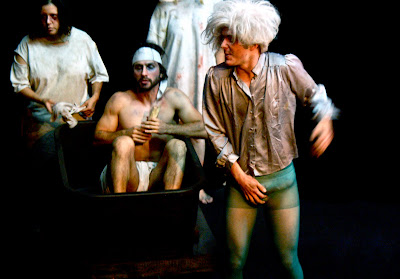 As any reader of the Barnet blogs knows by now, the Tory adminstration and senior management team of this borough are relentlessly pushing ahead with a massive drive to give the running of almost all council services over to the private sector, with a short list of favoured tendering companies competing for a billion pounds worth of prized contracts which will guarantee them years of profit, at the expense of the residents of Barnet, and delivering up to a thousand employees into the wilderness of employment, with no security of tenure, or conditions of service. In case you didn't know, it's called One Barnet.

Any resident who thinks that this process is being instigated for the benefit of the community is delusional.

This eye wateringly huge package of outsourced services is being sold off as a result of policy promoted by senior officers working with the hugely influential companies who stand to prfot handsomely from the business on offer, and it is being sanctioned by the cabal of unaccountable councillors who have hijacked the Tory cabinet, and this borough, holding us all to ransom as victims of their lunacy.

The senior management team is pushing this programme for pragmatic, if self interested reasons, ie as a natural part of their career plans: the Tory councillors are doing so because they are stupid enough to think that they are following some sort of ideological agenda, rather than acting like a troupe of performing monkeys, trained to do their masters' bidding.

That the Tory leadership of Barnet council lives entirely in a hermetically sealed environment, pumped full of One Barnet hot air, was illustrated beautifully in a recent article in the Ham & High newspaper, in which Richard Cornelius spoke about One Barnet, and outsourcing, and his frustration at having to abide by the laws regarding procurement of the services being put up for grabs:

"He described the procurement process as having “the gestation period of an elephant”.

“This is the public sector and, in many ways, we’re impaired by European procurement rules,” he said. “We have to advertise across Europe and wait for responses.

“It would really be nice if we could decide what we want to do, specify what we want without fear or favour.”

You might think, or hope that they had learnt their lessons from the MetPro scandal, where a staggeringly negligent lack of regulation led to several years use of an illegally operating security company, without contract or tender. Clearly they have not: like little boys in a sweetshop they can only see the temptations on offer and have no sense of self restraint.

Staff working for Barnet Council are not just sitting back and accepting their fate at the hands of the pimps selling them off to the highest bidder, however. Tomorrow sees the second day of industrial action organised by Unison, whose press release is published below: as you will see, union members have decided to take action in an unconventional manner, through the medium of street theatre - Councillor Daniel Thomas has already expressed his interest in their performance. Break a leg, darlings ...

300 UNISON members will be taking one day strike action On Tuesday 18 October as part of a Trades Dispute which concerns the identity of the employer.

Unlike other strike action there is a twist.

On the picket line outside the headquarters of Barnet Council (north London business park) UNISON members will stage a short piece of street theatre to demonstrate the dangers of One Barnet Programme to residents, services and staff.

There will be two performances at 9am and 9.30 am.

At 10.30 am a number of strikers will be taking a coach trip across the borough in order to provide help and assistance to a local charity which is desperate need of help. The strikers will spend the rest of the day carrying a number of tasks for the charity.

Later on the same day other UNISON members are supporting ‘Operation RESDIENTS MUST KNOW!’ by handing out newspapers and leaflets to Barnet residents outside tube stations across Barnet.

The day’s activity will end with a Candlelight Vigil outside Hendon Town Hall from 6.30 pm before the Planning Committee begins.

Barnet Easy Council is promoting the ‘One Barnet Programme’ (OBP) which is being rolled out across all council services. They previously identified up £3 Million to implement what was called Future Shape policy. The latest brand One Barnet programme has £9.2 million budget to pay the bills of expensive consultants to carry out this mass outsourcing programme. The workforce implications of OBP could be that 70% of the council workforce could be transferred to the Private sector in little more than 15 months time.

“The Council is gambling that the private sector can deliver £100 million savings over the next 10 years. We have seen no evidence to substantiate these claims. In other parts of the country we have seen the consequences of such blind allegiance to public sector bad private sector good. Our members are not daft; they can see that redundancy and cuts to jobs and services are behind the transfer from the council to a private sector contractor’

Strike action is always a last resort, for the last three years we have been asking for a genuine dialogue with the council to explore ways to save money, improve services.

Barnet Easy Council gained notoriety in 2009 when they launched the budget airline model for public services. In 2010 the model was criticised in a report by the external auditors as having failed to draw up a proper business plan. The business case produced by Barnet easyCouncil supports the policy direction promoted by Prime Minister which seeks to break state provision (in this case privatise council services) and offer the Voluntary & Private Sector to run public services.

Good luck to all striking employees.
Posted by Mrs Angry at Monday, October 17, 2011